TRINITY — Practice made for almost perfect as the Trinity Tigers downed the Woodville Eagles 62-59 on Friday.

“I felt like we been in the gym a lot more, and they were realizing what is a good shot and a great shot, and had less problems with turnovers,” Mitchell said.

Top scorers in the match include Terius Maxie, who posted 20 points as well as banking the double-double, pulling down 12 rebounds; Jakai Miller-Gates with 18 points; and Trey Goodman with 13 points. 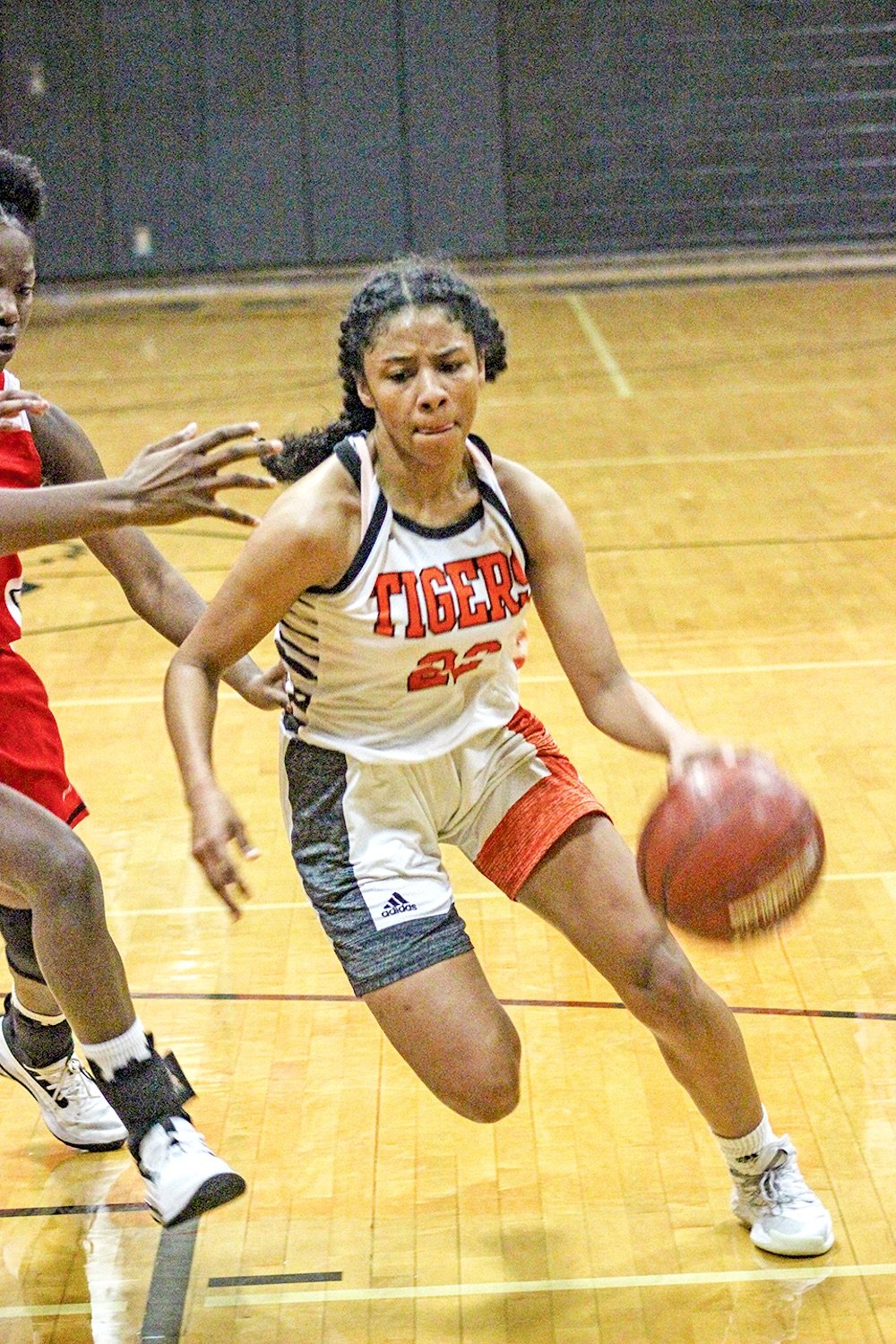 TRINITY — An extended football season led to a late start for the Trinity Tigers’ basketball squad, and the lack of playing time may have led to the 88-33 loss to Livingston on Friday in the teams’ first game.

Livingston took advantage of more playing time, as well as a distinct height advantage, during the game.

Head Coach Jacoby Mitchell said there was only five days of practice before their season opener, and that combined with having some key starters out was a factor in the loss.

“We had too many turnovers, we have to take care of ball better than that,” Mitchell said. “We have to work on taking great shots, not just good shots.”

Trinity now stands 0-1 on the season, and Livingston improved its record to 2-0.

Mitchell said his top producers in the game were Jakai Miller-Gates, who scored 13 points, and Terius Maxie, who dropped in 10 points.

TRINITY — A cross-county rivalry left the Lady Tigers with a 44-22 win over the Lady Indians on Nov. 7. 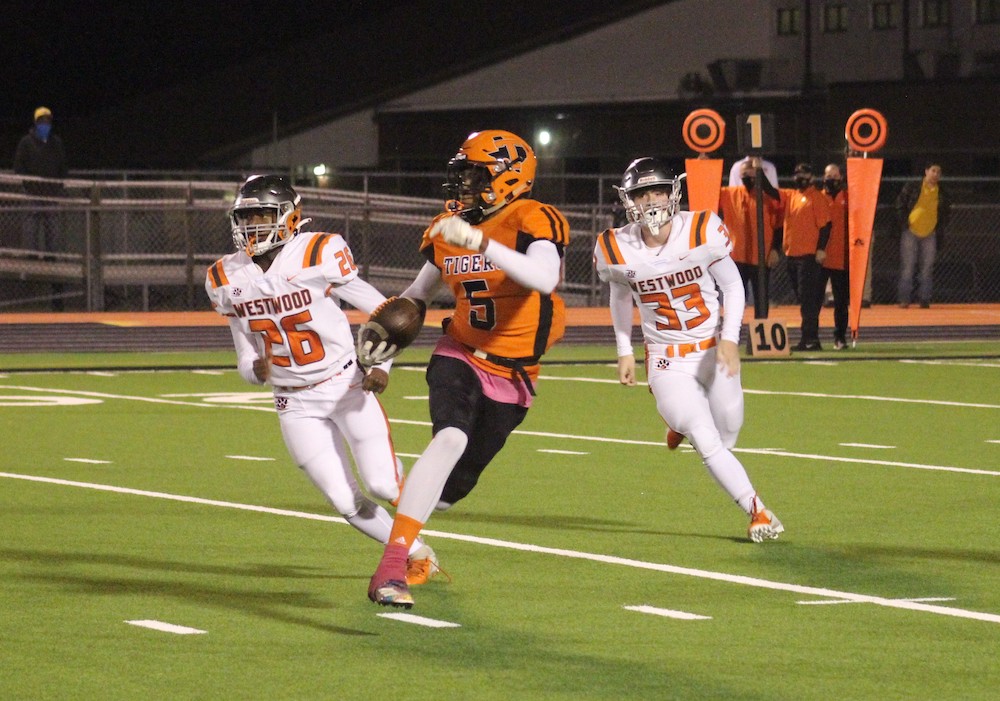 TRINITY — The Tigers entered the 2020 season with one goal, to advance to the playoffs. A 34-28 victory over the Westwood Panthers made that goal a reality.

The victory was accomplished by a strong running game by Trey Goodman, who contributed 285 rushing yards and one passing touchdown; a defense that made timely stops and intercepted Panther passes three times, one resulting in a touchdown; and special teams that was able to recover an attempted onside kick that sealed the victory for the Tigers.

The Tigers struck early with a 66-yard touchdown run by Goodman on just the second play from scrimmage. However, the Panthers were able to control the ball on their opening possession for a 15-play touchdown drive to take a 7-6 lead into the second quarter.

Westwood scored early in the second quarter and take a 14-6 lead. With 2:24 left in the first half, Goodman was able to pick off a Panther pass and return it to the 24-yard line giving the Tigers a chance to even the score before halftime. Two plays later the Tigers gave up the ball on an interception.

A timely stop by the defense forced the Panthers to punt. With just 25 seconds left in the second quarter the Tigers had one last opportunity to score. The Tigers needed one play for Goodman to find the end zone from a 35-yard run. Adding the 2-point conversion, the Tigers and Panthers entered halftime tied at 14.

The Tigers took the lead for good on their opening possession of the third quarter when Goodman found Jamarian Hall for a 32-yard touchdown pass. The Panthers next offensive possession resulting in a T.J. Jaramillo interception on the Tiger 14-yard line. On the Tigers third play, Goodman broke free for a 78-yard touchdown run giving the Tigers a 28-14 lead heading into the fourth quarter. 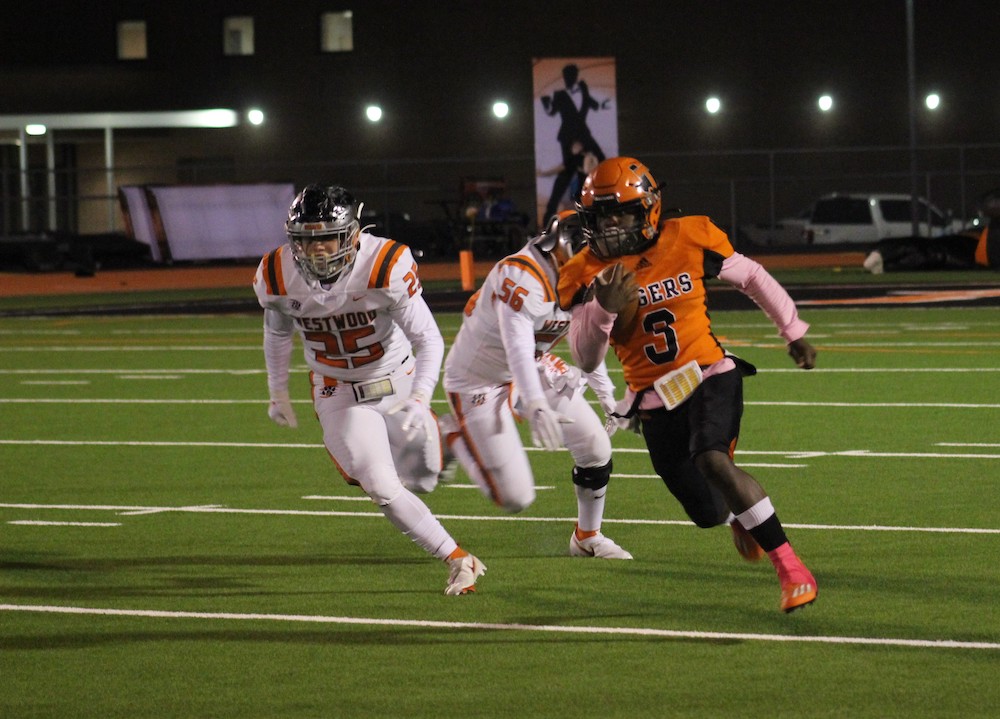 Trinity then drove to the Panther 28 yard line, but turned the ball over to the Panthers on a fourth-down run that came up short. An incompletion, a Raymond Balli sack and an interception returned 21 yards for a score by Romero Lopez gave the Tigers a commanding 24-14 lead with 6:47 left in the game.

The Panthers made the game interesting by taking just over two minutes to score and another touchdown with just 1:09 left to play. Leading by 6 points, the Tigers lined up for a Panther onside kick, and with the recovery, the Tigers special team was able to seal the win.

Kickoff is scheduled for 7 p.m.; once all the games become final, the Tigers will know their playoff opponent. 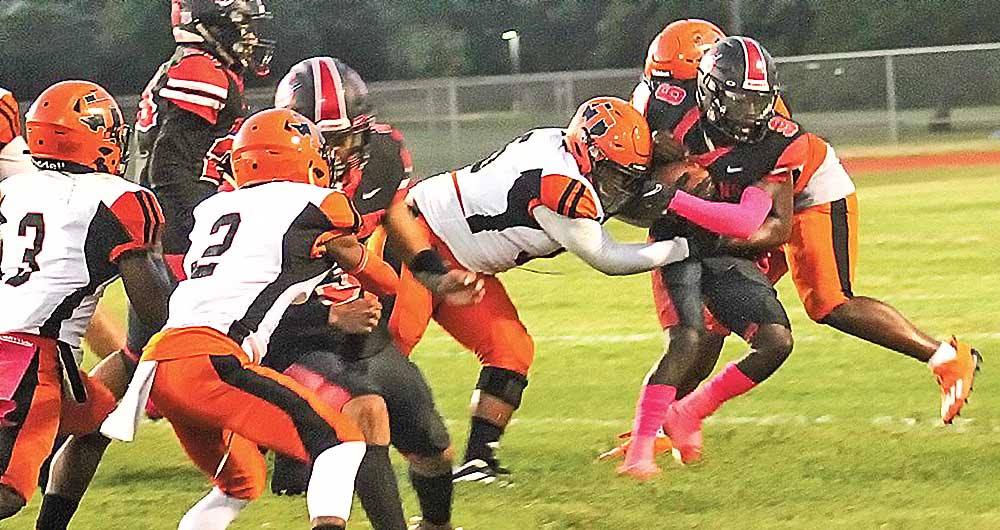 The Trinity defense wraps up a Diboll runner in the backfield during Friday’s district matchup.

TRINITY — In hopes of rebounding from a loss to Diboll, the Tigers traveled to Coldspring-Oakhurst Friday Night for the second of six district games.

The Trojans took the opening kickoff and marched down the field in four plays and took a 6-0 lead in just over 2 minutes. Each team traded punts, and on the Tigers second possession Trey Goodman took off for an 86-yard run, with the 2-point conversion the Tigers held an 8-6 lead with 4:12 left in the first quarter.

Unfortunately for the Tigers this would be their only score for the rest of the game.

The Trojan offense was able to score on each remaining drive of the evening. When the clock read zero, the Trojans had decimated the Tigers by a 48-8 score.

Head Coach Patrick Goodman explained to the team that they had a bye week upcoming Friday and would be able to get healthy as they prepare for a stretch where they must win three of the four remaining games if the Tigers hope to play in the postseason.

The Tigers will be off Friday but will be back in action on Oct. 16 as they host the Huntington Red Devils at 7 p.m.