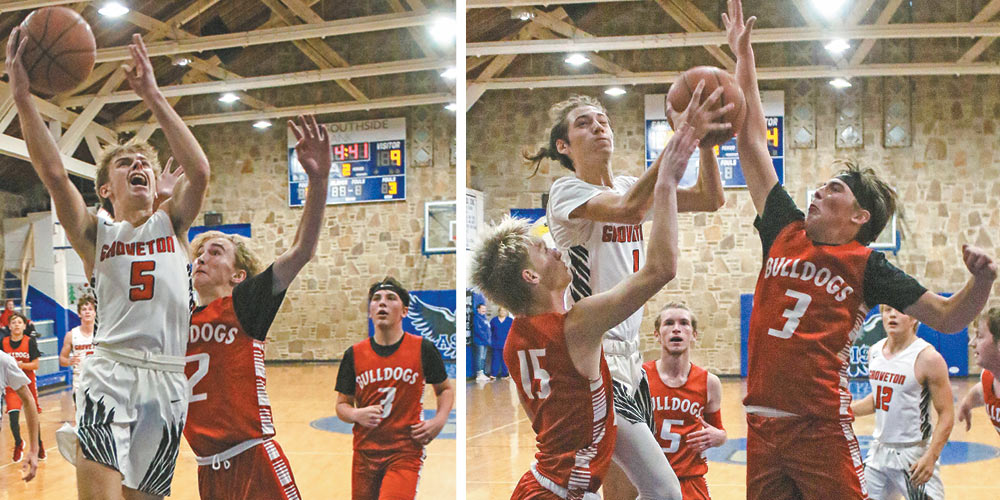 Groveton’s Jarrett Loftin (No. 5) goes up for one of his 14 points during the match against Centerville.Centerville’s Brayden Watson (No. 15) and Colton Brasuell (No. 3) attempt a block on Groveton Indian Billy Thomas (No. 1). Photos by Tony Farkas

In the Championship game the standouts were Jarrett Loftin with 18 points, Daiton Chandler with 10 points and Wyatt Snead finished with 16 points.

•Centerville took the Consolation Trophy with a 38-35 win over Chester.

The Bulldogs were in a back-and-forth battle with Chester, though both teams struggled offensively, and the score was 14-9 at halftime score.

Both teams scored 9 points in the third, setting up an exciting fourth-quarter finish; Chester led until Bulldog Aydn Self knocked down two crucial free throws with 4 seconds remaining in regulation to tie the game at 32 and send the game to overtime.

With the game knotted at 35, freshman guard Iain Kendrick hit a huge 3-pointer to put Centerville on top for a 38-35 final.

To get to the consolation final, Centerville lost to Groveton 44-31, but downed the Jacksonville JV team 47-23.

•Tournament host Apple Springs did not fare as well.