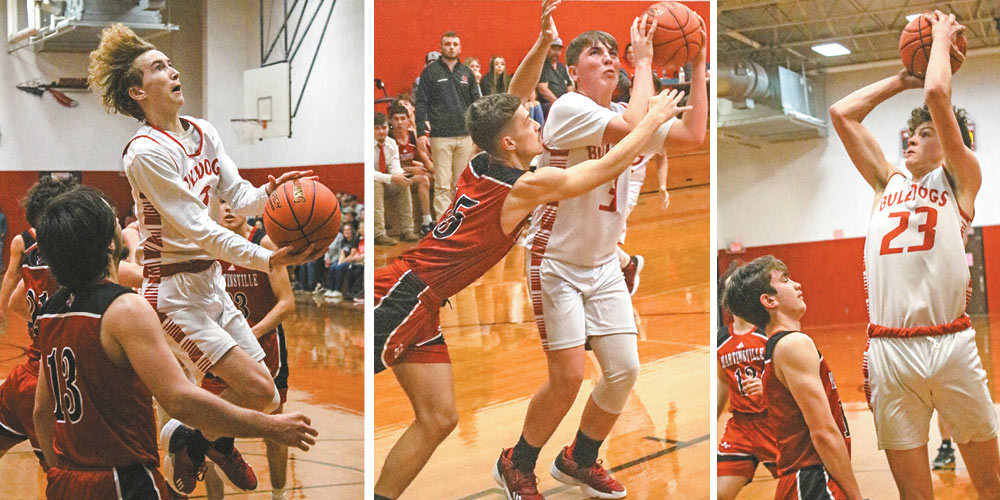 A Bulldog goes for the layup. Bulldog Colton Brasuell puts up a jumper.Centerville’s Anthony Commiato (No. 23) puts up a shot. Photos by Tony Farkas

The Lady Bulldogs fell to Wells 41-19 on Friday.

Top scorers were Malacie Bolton with 13 points and Kate Rogers with 6 points.

The Lady Tigers lost a district matchup with Anderson-Shiro 57-14 on Friday.

The Centerville Bulldogs lost two games, falling to Martinsville 78-35 on Jan. 3 and 62-28 to Wells on Friday.

Against Wells, top scorers were Aydn Self with 12 points, Blayn Self with 6 points and Iain Kendrick with 5 points.

On Jan. 3, Kendrick led with 14 points and Self chipped in 6 points.

On Feb. 3, Centerville is hosting Kennard at the Toyota Center in Houston. The girls varsity game will tip off at 12:45 p.m. followed by the boys game right after.

For entry, purchase tickets at rockets.com/promocode and enter promo code CISD. This ticket will get you into the Centerville-Kennard game and the Rockets game that night when they take on the Toronto Raptors. Limited number of discounted tickets available.

The Tigers posted two wins and became third-ranked in district after downing Onalaska 61-57 on Jan. 3 and Anderson-Shiro 54-44 on Friday.

Against Anderson, standouts included Jammale Johnson with 14 points and Cameron Anderson, who had a double-double with 10 points and 10 rebounds.

Against Onalaska, Junior Hernandez led with 14 points, followed by Tristian Martinez with 11 points and Kaden Barnes with 10 points.

The Indians split games last week, losing to Jasper 71-67 in overtime on Jan. 3, but winning 54-42 over Snook on Friday.

Against Snook, Billy Thomas poured in 10 points, Jarret Loftin had 11 and Daiton Chandler led all scorers with 21 points.

Against Jasper, Bryon Thomas had 19 points, Loftin chipped in 24 to lead and Daiton Chandler finished with 10 points.

The Eagles split last week’s games, falling 75-45 against Laneville on Jan. 3 but dowing Slocum 43-30 on Friday.

Against Slocum, Dakota Campbell led all shooters with 26 points, while Hunter Davis led rebounds with 10.

Against Laneville, Campbell again topped scoring with 23, and Davis again led in rebounds with 9.