Chester summer workouts have started, and the coaching staff is excited about the number of Yellowjacket athletes who have committed themselves to getting better. Pictured are the athletes that showed up on day one of workouts, which started on June 13 and will go on all summer. Summer workouts in full swing for Jackets. Photo by Jana Rayburn

CHESTER – The Chester Yellowjacket coaching staff is hard at work this summer. The athletes are working out from 9am-11am Mondays through Thursdays, in hopes of getting stronger and faster for the upcoming school year.


Athletic director Coleman Butter is encouraged by the number of athletes that are choosing to attend the workouts.


Butter said, “Year-round commitment by our athletes will make a huge difference when we start competing next year.” Sport specific training is from 11am until noon every day. Athletes need to bring water, wear appropriate athletic clothing and footwear, and a good attitude. Football players also need to bring cleats. These workouts are open for all incoming seventh through twelfth graders, and will go on the remainder of the summer, except for a break from July 4-8.


Coach Crystal Muncrief said “We have had a good turnout so far this summer and are looking forward to a great year. Along with our morning workouts, we have many evening opportunities available for our athletes”. Coach Muncrief hopes to see everyone there.


This is open to all incoming seventh–twelfth graders who live in the Chester ISD district or attend Chester ISD.


More information on the times will be made available closer to these dates. You can keep undated on events related to summer workouts and camps on the Chester


Looking ahead to the end of summer, varsity football and volleyball practices will start on August 1. 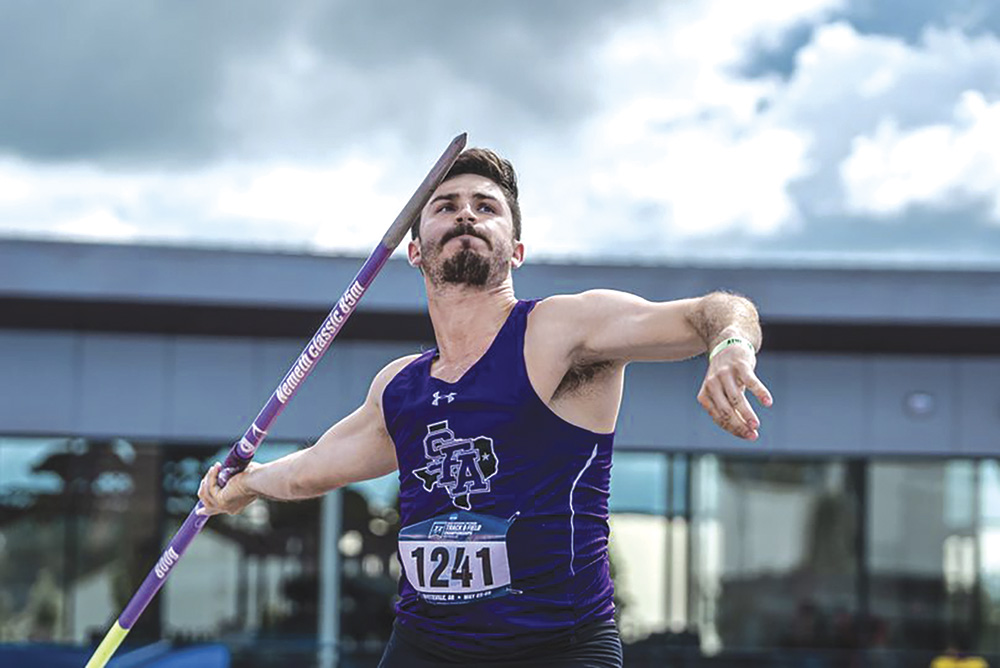 Cord Neal, 2017 graduate of Chester High School, competed in his final collegiate meet in Eugene, Oregon last week at the NCAA Division I Track and Field Championship. Neal threw the javelin throw 68.82 meters, earning Neal 13th place in the nation and Second Team All-American honors. To get to Eugene, Neal first took 2nd place in the WAC Outdoor Championship with a throw of 65.77 meters. He then took eighth place in the NCAA West Preliminary round with a throw of 69.09 meters.

In 2018, as a freshman, Neal placed second in the Southland Conference Championship and 38th in the NCAA Division I West Preliminary rounds.

Cord Neal started college at Stephen F. Austin in the fall of 2017, after graduating from Chester High School as the class Salutatorian. Cord was a standout athlete at Chester, competing in football, basketball, cross-country, baseball, golf and track and field.

Neal advanced to the state meet in Track and Field.

He was on the state qualifying golf team, and he led the basketball team to their first post-season playoff spot in several years.

Neal, who received his undergraduate degree last year from SFA, will begin Medical School at the University of Houston in July.

Scott KeyBy Chris Edwards
This email address is being protected from spambots. You need JavaScript enabled to view it.

WARREN – Some additions were named to the coaching ranks in Warrior country last week.

Warren ISD will welcome a new head baseball coach, along with a full-time trainer and conditioning coach.


Scott Kay, from Silsbee, was named to be the new head baseball coach for the Warriors.
In a statement from Warren ISD, the district is excited for Kay to join the ranks, as he “brings passion, energy, and knowledge to the table. He has a strong heart for kids and values the role athletics plays in the development of our young students.”


Kay, who graduated from Lamar University in 2018, joins the Warrior baseball program after serving as a head coach for both boys and girls sports at Beaumont’s Odom Academy.


In addition to Kay’s appointment, the Warriors’ athletics program also welcomed aboard, for the first time, a full-time athletic trainer and strength and conditioning coach, who will work with the Warriors and Lady Warrior teams starting in the fall.


Chase Burkhalter will join the Tribe’s faculty and staff as athletic trainer and Stratton Williams will serve as strength and conditioning coordinator for Warren ISD.


In other Warrior baseball news, two team members were named to the District 22-3A All-District honors last week. 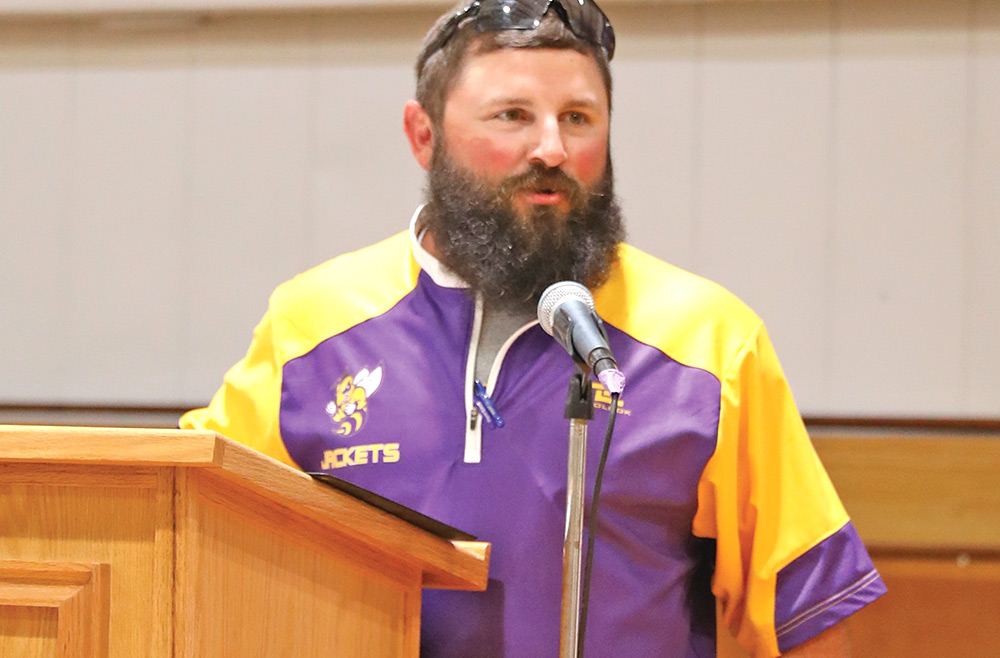 Chester ISD Athletic Director Coleman Butter was proud to recognize the athletes of CHS and talk about their accomplishments. Photo by Jana Rayburn

CHESTER – The Yellowjacket Athletic Banquet was held a few weeks ago in Julius P. Johnson Gymnasium. High school student athletes were recognized for their hard work put in this past school year, whether it be on the baseball or football field, in the gym, on the track, or on the golf course.


This night of awards also recognized the Most Valuable Player in each sport. Lily Read was named MVP for volleyball and basketball. Bailey Fann was cross-country MVP.


Will Thomason was the Golf MVP. The baseball MVP was shared between Carsyn Whitworth, Carson Thomson and Peanut Fann.
The Aubry Bradley award winner was Carson Thomson. 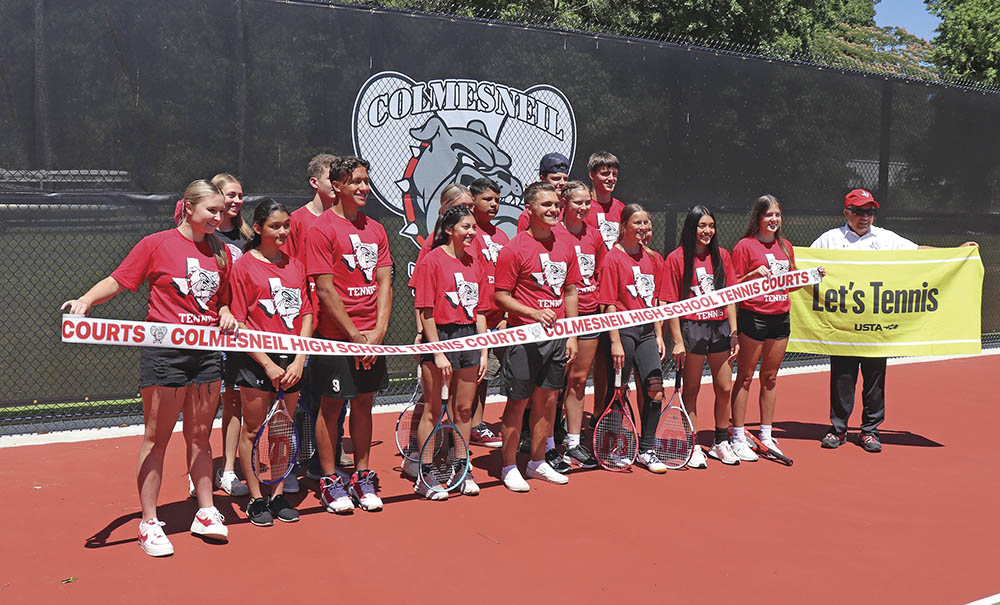 Coach Sergio Ramos with a group of Bulldog and Lady Dog tennis athletes on Friday. Photo by Chris Edwards

Tennis is, in the words of legendary coach Sergio Ramos, “a lifetime sport.”

Ramos, who is one of the winningest tennis coaches in Texas high school history, announced his retirement, and was celebrated on the same day as a new, state-of-the-art tennis facility was unveiled.

Ramos, who has taught and coached at Colmesneil High School for several years now, spoke to the public and helped unveil the district’s new tennis courts, which are made with post-tension concrete and made to last for many years.

Throughout his 55 years as a coach and educator, he said his goal has been to always promote tennis as a lifelong sport.

In a career that goes back to the late 1960s, Ramos likely has one of the most decorated mantles in Tyler County, with awards and citations from numerous organizations, and as the feather in his cap: an induction in 2008 to the Texas Tennis Coaches Association Hall of Fame.

In addition to his numerous awards and honors, an annual tennis tournament in Beaumont was named in his honor and draws teams from all over the region.

A scholarship for high school senior tennis players was also set up to honor Ramos, in 2016, and Ramos has also been a leading light in the Tyler County community outside of the schools he has served, volunteering for a variety of causes, and serving with the Woodville Lions Club for many years.

In addition to all of his prowess on the court and in the classroom, the Mexican-born Ramos also became a U.S. citizen in 1970.

During the ribbon cutting ceremony at Colmesneil last Friday, Ramos said that although he might be retiring from coaching, he will still get out on the tennis courts as much as he can. 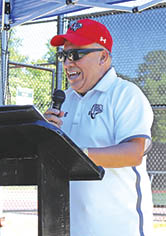 Ramos, during his remarks, had several friends from the tennis world come and speak about him, including former Lamar University tennis coach Ron Westbrook, who agreed that tennis is a lifelong sport.

Longtime CISD administrator Walter McAlpin, who is also retiring this year, introduced Ramos, and joked about his lack of experience in the game of tennis when he came to Colmesneil. McAlpin initially served as tennis coach, when the courts were located in front of a then-new high school addition, which faced FM 256.

Until recently, the teams were practicing in the old gym with a moveable net.

Prior to the ribbon cutting, Ramos addressed the recent tragedy in Uvalde, and said that it was important to reflect and pray in the face of such devastating events.