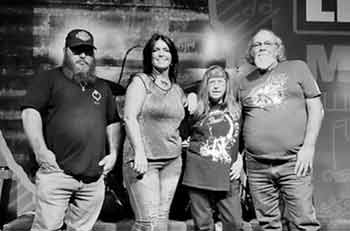 WOODVILLE – The Emporium Stage in downtown Woodville is bringing another live music event to the public this weekend. Regional blues-rockers Ina Dilemma will take the stage at 7 p.m. on Saturday, Oct. 2.

Doors open at 5:30 p.m., and tickets are $15 for general admission. All proceeds from the show will go toward the Emporium Stage and its efforts to continue bringing quality live entertainment to Woodville.

Singer/guitarist Kirsten Hardmant will open the show. Hardmant will start at 6:15 p.m. and has played around town at venues such as Doretta’s Lair and the Magnolia Bar and Grill as a solo act.

She draws from a large repertoire of classic singer-songwriter-type rock and soft rock songs, including covers of Tom Petty and James Taylor.

The band has been active for several years in the area, and plays a variety of tunes, from blues-rock standards like “Pride and Joy” to Fleetwood Mac’s “Gold Dust Woman.”

The show’s organizers are encouraging the public to get there early to get a good seat. The show is BYOB. 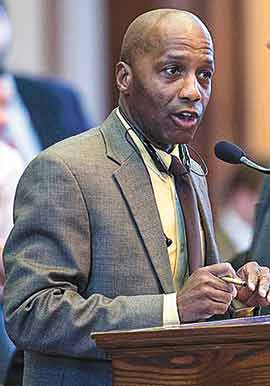 James WhiteBy Chris Edwards
This email address is being protected from spambots. You need JavaScript enabled to view it.

While filed the two bills, HB 93 and 94, last Tuesday, after the Texas Legislature’s third special session began. The text of the bill refers to the Pelosi Congressional Vaccination Doctrine Act, and would prohibit businesses and governmental entities in the state of Texas from requiring customers and employees from requiring vaccinations or documentation certifying vaccination status.

The text of the bill also states that businesses which require employees to provide proof of vaccination(s) will not be eligible to receive a grant or enter into a contract payable with state funding.

The accompanying bill, HB 94, relates to the establishment of a COVID-19 health information clearinghouse through the Texas Division of Emergency Management (TDEM).

TDEM would, under the bill, maintain a database of Coronavirus immunization information, including the total number of individuals who are vaccinated against the disease in Texas and for the public to be able to search the database for information.

The database would also include information pertaining to COVID-related deaths in the state, as well as hospitalization statistics.

The current special session, which began last Monday, Sept. 20, will expire on Oct. 19. 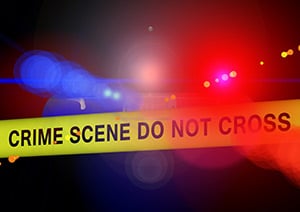 SPURGER – A murder that occurred in March near Spurger has investigators asking for the public’s help in solving the case.

The shooting death of Jamerion D. Mitchell, a 32-year-old Lufkin man, occurred at a party on the early morning of Sunday, March 21, at a residence known as Stittem Hill. According to Tyler County Sheriff Bryan Weatherford, investigators with the Tyler County Sheriff’s Office are working with the Texas Ranger to investigate Mitchell’s murder.

Weatherford said that law enforcement working on the case have interviewed “several potential witnesses and followed several leads.” One aspect of the crime that had investigators puzzled from the beginning is the number of people who were present at the party, and the lack of cooperation from anyone regarding the crime.

There were more than 100 individuals gathered at the residence, which was a trail ride party, and shortly after the initial investigation, Weatherford reached out to the public asking for anyone who might have information, including video recordings, photos of the trail ride or any social media information.

When the first deputies arrived on the scene of the crime, they observed several individuals standing over Mitchell, who had been shot multiple times in the chest and stomach area. He was pronounced dead at the scene.

One Woodville resident, Kendall Coleman, had been at the party before the incident. Coleman, who owns Coleman’s Family Mortuary, was called out to recover the body, and the gravity of the situation struck him. He made a public video expressing his shock over the event and calling for anyone with knowledge of the crime to come forward.

Investigators are still in search of any videos, photos or other lead-conducive information, and anyone who might have any of these items can contact either of the agencies investigating the crime or Crime Stoppers.

TCSO can be reached by phone at 409-283-2172, or by email at This email address is being protected from spambots. You need JavaScript enabled to view it.. The Texas Rangers, Jasper office can be reached at 409-384-5712, and Crime Stoppers can be reached by calling 936-639-TIPS. Tipsters calling in information to the Crime Stoppers hotline that leads to an arrest may be eligible for a cash reward, and tipsters may remain anonymous. 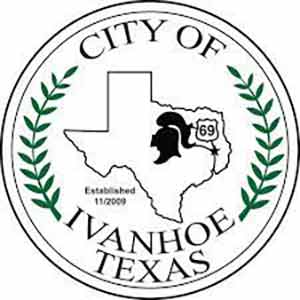 IVANHOE – In an emergency meeting of the Ivanhoe City Council, last Thursday, council voted on the city’s proposed tax rate for the coming fiscal year.

Mayor Cathy Bennett began the meeting, after calling it to order, by explaining that the proposed tax rate needed to be published in the newspaper prior to adopting the official rate, which will take place on Sept. 29. after a public hearing on the budget and tax rate.

Bennett explained that the proposed tax rate is 0.8322 cents per $100 of assessed valuation. This rate includes factoring in the over 65 exemption, and the estimated values of taxable property with this rate would decrease by $1 million from last year’s values, from $84 million to $83 million.

The proposed rate was unanimously approved by the council.

A regular council meeting followed the emergency-called meeting, and the council and Bennett heard from Victoria Dye, of LJA Engineering.

Dye spoke about bids received for road construction projects to be undertaken with funds from the bond the city received last year. Dye said two bids came in, one from Gulf Coast at a base bid of $556,754.68, which was the lowest.

The project was slated to include Sherwood Drive, Forest Drive West and Lakewood Drive. Dye said her firm had looked into using an oil-sand surfacing material for the project, which was included in Sherwood and Forest roadways, and traditional hot mix surfacing on Lakewood.

The alternate situation would be hot mix for all three roads, the contract would be more than $562K, Dye said.

Council voted to award the contract to Gulf Coast. Following the vote, Wayne Sweet, of Gulf Coast, spoke to council, and explained the differences between the types of road materials being considered.

The oil sand product, he said, is cheaper, and holds up well under light traffic loads. Regular asphalt, he said, is a more consistent product for higher-travelled roads.

Sweet said he anticipates the project starting in five or six weeks. 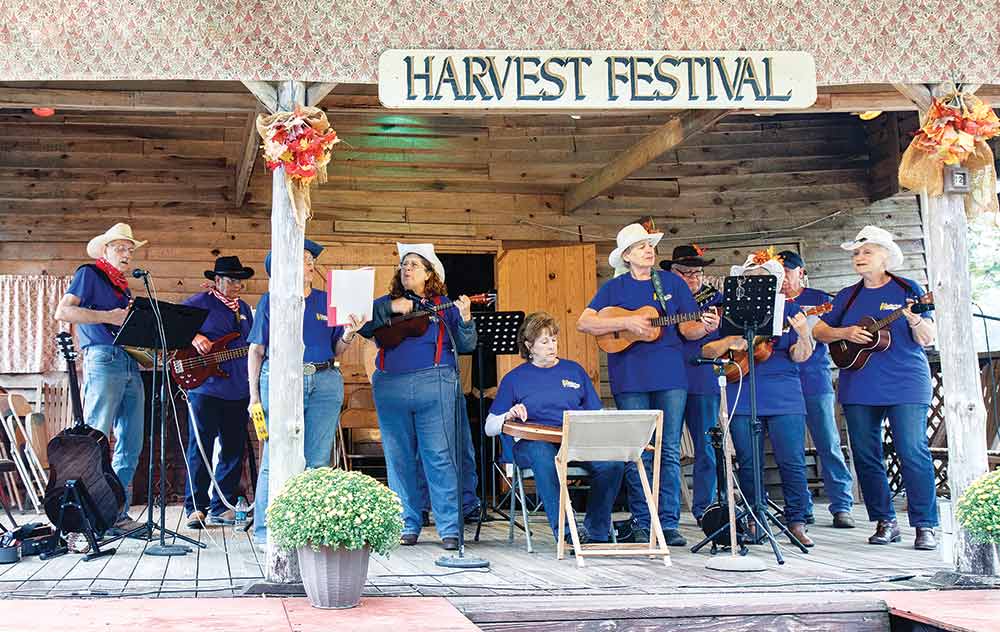 WOODVILLE – Following a forced hiatus due to the coronavirus, the Harvest Festival is returning to Heritage Village.

The festival will take place on Oct. 15-16, and this will mark year number 32 for the region’s premiere folk-life festival. Ofeira Gazzaway, the director of Heritage Village, said the festival is still in need of demonstrators and volunteers.

Volunteers, Gazzaway said, are essential to the Village’s (and the Harvest Festival’s) success and longevity.

For those who wish to participate in the festival as a vendor or demonstrator, they are welcome to do so if their product(s) are appropriate to the time period of 1840-1920, which is the span of time that the Village covers.

During Harvest Festival, participants dress in period costumes, use tools of the period and demonstrate skills that settlers used during the time period.

The festival always includes demonstrators of artisan skill, such as the blacksmith demonstrations and jewelry-making, as well as dance and music, and food vendors.

There will also be a photography contest, which will be staged a bit differently than in the past. This year, participants are to take their photos at the festival itself, and the adjudication of the contest will take place after the festival is concluded.

This year’s festival will start with “Kids’ Day,” which will feature schools bringing children to the village from 9 a.m. to 1:30 p.m. There will be a short version of the Runaway Scrape for the children. On day one of the festival, the Village is open until 3 p.m.

On Saturday, day two, the fun will begin at 9 a.m. and last until 5 p.m. Attendees will be able to tour the Gray House, as well.

Admission to the event is $6 for adults, $3 for children aged 5-11 and free for those four and under.

For information on volunteering or participating in the Harvest Festival, call 409-283-2272 or email This email address is being protected from spambots. You need JavaScript enabled to view it..