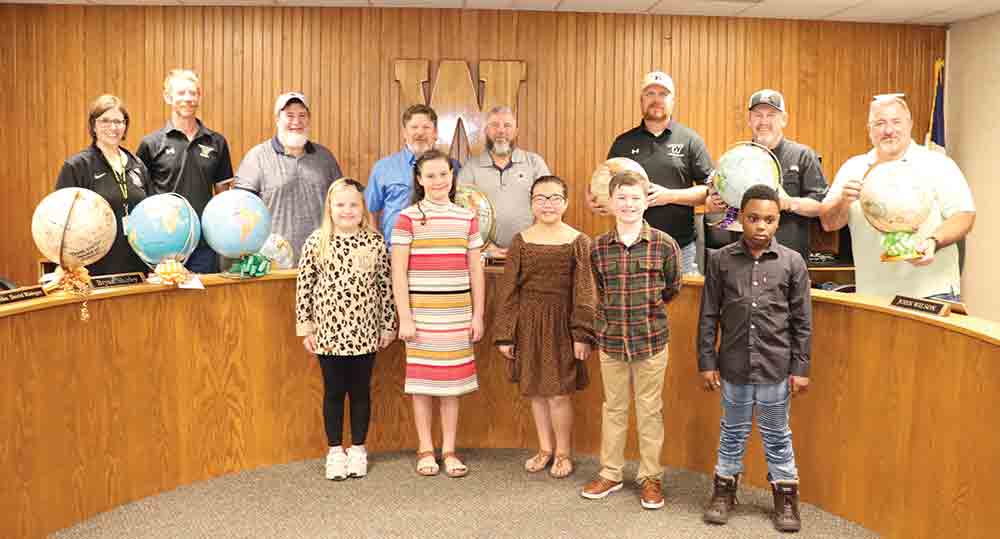 Woodville Elementary and Intermediate Gifted and Talented students presented the WISD Board of Trustees with customized globes as gifts for their leadership in moving the district forward. CHRIS EDWARDS | TCB

WOODVILLE – At its regular monthly meeting on Monday night, the Woodville ISD Board of Trustees discussed a future possibility of a four-day instructional week.

The approach, which has been adopted by some districts in the region, such as Colmesneil ISD and Jasper ISD, has been the subject of a discussion by the district’s advisory team and a subsequent survey distributed to faculty and staff, according to WISD Superintendent Lisa Meysembourg.

Meysembourg said that, overall, the results of the survey showed that 46% of respondents preferred, or would like to try, a four-day week, while 20% have no preference and the rest did not.

“We need some more information, and will be going out to the community,” Meysembourg said.

Meysembourg stressed the importance of gathering the community’s input, and that of businesspeople, as to how such a change might affect them.

The purpose of Monday night’s discussion was to gather the thoughts of the trustees, Meysembourg said. Many of the board members agreed that it was important to reach out to other districts that have adopted four-day weeks to gather information on how the change has worked for them.

Trustee Kris Fowler asked if a move to a four-day week would allow teachers to be able to do their best and emphasized that if such a change were instituted that it be carefully and strategically implemented. “I’d like to see it not rushed in to,” he said.

Prior to the regular agenda, the WISD Board conducted a public hearing to review and discuss the district’s 2021-22 FIRST rating results.

Assistant Superintendent/Finance Manager Cody Jarrott said the district received a mark of “Superior Achievement,” with an overall score of 98. A passing score, Jarrott noted, is 78.

The acronym, which stands for Financial Integrity Rating System of Texas is a system of accountability conducted by the state to ensure that public schools are held accountable for the quality of financial management practices.

Jarrott said it is getting “harder and harder to meet these scores,” and added that the district did very well.

WISD Board President Jimmy Tucker, on behalf of the board, commended Jarrott for an outstanding job in handling the district’s finances.

ESSER funds put to use

The ESSER funding is part of a federal program, approved by the Department of Education, as part of aid that came about during the pandemic. The funds were designed to help keep schools open, invest in infrastructure and provide emergency financial assistance for projects necessary to school districts, with funding available through Sept. 2024.

The trustees unanimously approved proposals for a district-wide security system; a district-wide communication system overhaul; a budget amendment for repair to the football field turf and the approval of the purchase of exercise equipment, all projects funded through the district’s ESSER allotment