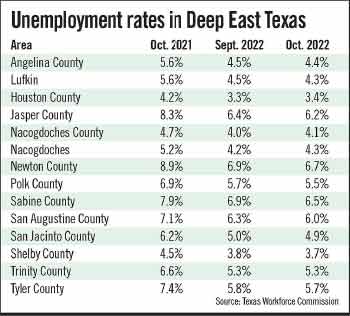 AUSTIN – According to figures released last week by the Texas Workforce Commission, the unemployment rate in Tyler County continues to fall, with October’s percentage of jobless residents at 5.7%.

That figure is down from 5.8% from the previous month, and a large reduction from the year-to-date figure of 7.4% from October 2021. Tyler County experienced an average of 8.5% unemployment during 2021.

Of the county’s labor force of 7,439 workers, 432 are unemployed. Tyler, and neighboring Polk counties are in the Top 50 of Texas counties with the highest unemployment rates, by a list compiled by the website Stacker.