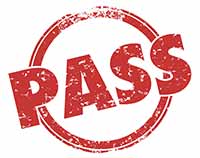 All of Tyler County’s five school districts made the passing mark, with Chester, Colmesneil, Spurger and Warren receiving “B” grades and Woodville ISD receiving a “C.”