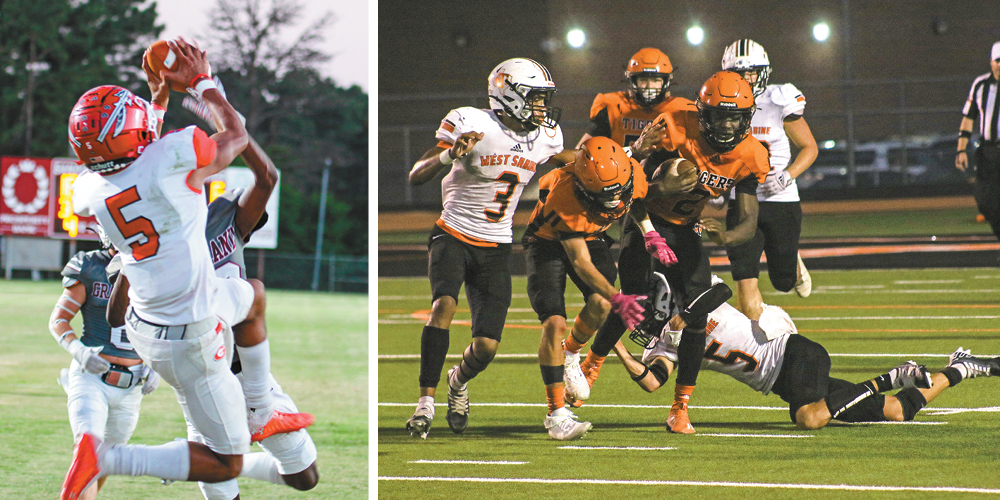 TRINITY — As the Tigers wrapped up non-district play, the halftime show included a tribute to all local veterans and first responders.

Also in attendance for brain aneurism awareness was Ethan Ramsey, who was the victim and survivor of a brain aneurism that kept him hospitalized for months and who is currently undergoing extensive physical therapy and rehab.

On the field, the Trinity Tigers welcomed the West Sabine Tigers to Tiger Stadium in what was called the “Battle of the Tigers.” One Tiger team dominated the game and unfortunately it was not the hometown team.

In what looked like an even matchup on film, the West Sabine Tigers took control of the game from the middle of the first quarter and never looked back. The Trinity Tigers never were able to get momentum in any phase of the game as they fell to 0-4 with a 50-0 loss.

A disappointed Coach Patrick Goodman addressed the team after the loss and explained that he had been hopeful of a better record after non-district play ended, but we are now entering the important phase of the season.

Each team is headed into district with a 0-0 record and better play and determination from each player can give the Tigers the wins needed to participate in the postseason.

Injuries and lack of disciplined play have hindered the Tigers in the non-district portion of the season, but Goodman said he is optimistic the Tigers can perform better when district play begins.

The Tigers will take the long trip to Hemphill Friday Night. Kickoff will be at 7 p.m.

The Eagles overpowered Tyler on Friday, blanking the Heat 54-0.

Head Coach Cody Moree said It was the team’s first shutout of the year.

On special teams, Kail Rogers made two successful onside kicks. Wade McMullen had 5 2-point and 1 1-point conversions, and Ricky Goodwin had one.

Offensively, Dakota Campbell rushed for one and threw for five touchdowns. Kameron Spencer and Ricky Goodwin each had one rushing TD. Touchdown passes were caught by Ryan Phillips, Hunter Davis, Bradyn Kaufman and Conner Kaufman.

The Indians lost to the Grapeland Sandies 44-26 on Thursday.

The game was moved from its normal time Friday due to issues with finding officials.

Top offense performers were quarterback Ian Utz, who went 12-21 for 186 yards for 4 TDs and tossing 2 interceptions.

Top rushers were Utz with 10 carries for 37 yards; Phoenix Bowman with 8 carries for 12 yards; and Darius McQueen with 6 carries for 28 yards.