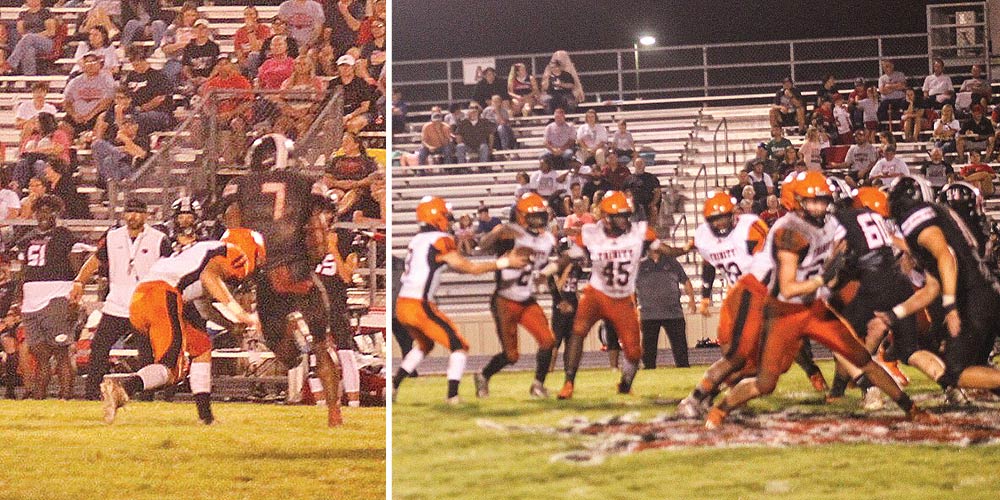 KIRBYVILLE — Coming off a 0-10 record last season, the Tigers were hopeful of getting the sting of defeat replaced with the taste of victory. Unfortunately, a 30-minute rain delay, a swamp of a field and a tough Wildcats team combined for a quick stop to the dreams of victory.

Trinity lost to the Wildcats 52-0 on Friday in Kirbyville.

The Tigers received the opening kickoff and a quick three plays and a punt gave the ball to the Wildcats. The Wildcats first possession ended just a quickly with a fumble recovered by the Tigers on the second snap.

Unfortunately for the Tigers that would be the only bright spot in the first half of play as the Wildcats scored on every following possession of the first half, including an interception returned for a touchdown.

The Tigers went into the locker room at halftime hoping to make adjustments to improve on a 38-0 deficit that included one defensive stop in the form of a recovered fumble, zero first downs, one pick six and one fumble.
The second half was more merciful on the Tigers as the game clock ran continuously and the Wildcats only had possession of the ball four times. The Tiger defense was able to force one fumble, one tackle for a loss, one fourth down stop late in the game and give up two more touchdowns.

The Tigers were able to make one first down in the game, with 2:26 remaining in the third, when Cole Hortman caught a pass from Jonah Gonzales.

For the duration of the game, the Tiger offense never crossed the 50-yard line and gave up one pick six interception, lost one fumble, completed one first down and one pass completion. The defense had 2 fumble recoveries, and one defensive stop, but gave up six touchdowns and 10 2-point conversions.

Opening the season with a 52-0 loss was not what the Tigers and coaching staff had hoped. While addressing the team, Coach Patrick Goodman expressed his disappointment with the team for their performance and work ethic during practices. He stressed that each player needs to be at practice each day and work to get better.
The Tigers will once again be on the road Friday night as they make the short trip to Groveton to take on the Indians and renew the historically heated rivalry. Kickoff is scheduled for 7:30 p.m.

Apple Springs
The Eagles christened their new stadium in grand style, outlasting the Trinity School of Texas Titans 51-6 on Friday.

Logan Nunley carried the ball 14 times for 179 yards and 4 touchdowns. Also contributing was Ricky Goodwin, who rushed for 71 yards and one TD; Ryan Phillips with 51 yards and a TD; and Kameron Spencer had a 17 yard reception for a TD.

Quarterback Dakota Campbell had one TD pass and another rushing. Linemen Bradyn Kaufman and Wade McMullen had 21 and 17 key blocks, respectively.

Defensively, the team recorded 6 stops in 7 series. Leading tacklers were Dawson Moore with 12 and Hunter Davis with 10. Ricky Goodwin and Logan Nunley each had 5 and Tanner Smith had 4.

Groveton
LOVELADY — The Groveton Indians fell in their season opener 28-7 to the Lovelady Lions.
Leading the offense for the Indians were David Ayala with 5 carries for 22 yards; Darius McQueen with 8 carries for 37 yards and 1 TD; and Ian Utz with 9 carries for 22 yards.
Defensivly, Logan Townsend had 8 tackles, Wyatt Snead 7, Chase Blair 6, Tanner Steubing 6 and Daiton Chandler with 3 tackles and an interception.