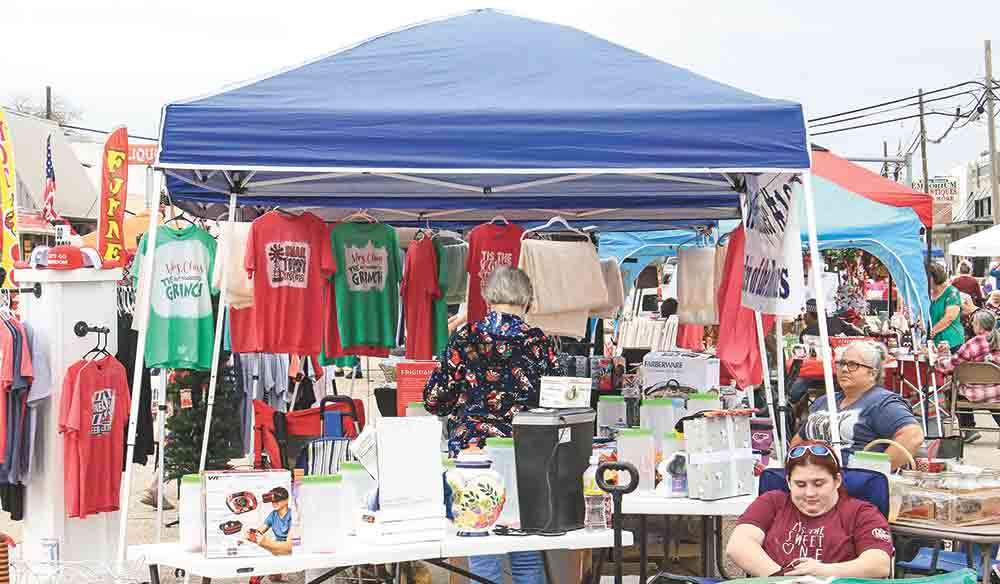 Many vendors showed up to sell their goodies at the Trinity Christmas at the Crossroads Countdown to Christmas extravaganza Saturday. Photo by Tony Farkas

I have survived another Countdown to Christmas Show. Christmas at the Crossroads begin for me twenty-five years ago when I moved to Trinity, Texas in June of 1997. I moved to Westwood Shores Subdivision for my husband to practice retirement, and in three years that it took him to retire, I had already joined the Trinity Chamber; helped secure an after-school program for children (called the Boys and Girls Club of Trinity); and helped re-organize the Trinity PTA volunteer group on all three campuses.

The movers and shakers of Trinity were from the best Trinity families, and believed it was their responsibility to carry on their family legacy with great teachers, workers and volunteers who shaped Trinity into the great place we reside in now. At the end of this article is my tribute to all the people who supported this event. Please thank them too.

At six o’clock in the morning we had a little rain, but the day turned out to be perfect even without the sunshine, and the show was awesome. We had visitors stopping through our city and they were very generous.

The vendors were very creative with their wares, and the different aromas of BBQ and hamburgers filled the air. The Stage was set for the wonderful array of entertainers, and we were privy to some of the best local talent in Trinity County. First was the Trinity Lions Club Singers, followed by the Trinity Tabernacle Pentecostal Church Choir, and then Kelly Hartsfield and her repertoire.

After Santa arrived and passed out bags of candy, Keren De Bose took the stage and sang songs from her new album. She and Kelly were both fantastic singers. Everyone was in awe at what talent we have here in Trinity, and it is a joy to know we are so blessed by these entertainers.

The vendors were very generous in donating door prizes, and we had drawings all day long until the parade started. Trinity County Crime Stoppers sponsored Santa Claus’s bags of candy and the children loved Santa in his beautiful beard and exquisite suit. Mark Cole has played the role of Santa Claus for many years for the Trinity Peninsula Chamber of Commerce and plays Santa for many other organizations as well.

I must tell you one of the vendors had a beautiful mannequin of the Grinch who Stole Christmas, and her friend JoAnn Kennedy said,” the grinch did not steal Christmas, because the Grinch was the was first thing to be sold at their booth.” (I wondered later if he came back later in the parade and tried to steal our Christmas again.)

Santa’s will reappear at the Martin Senior Citizen Center on Friday, Dec. 16, at noon to take free pictures for the “elder” children, and the Center will provide a Christmas Dinner for $10 per person. The Thanksgiving dinner was awesome, so, don’t miss you chance to eat another wonderful meal here at the Martin Center located at 400 Walker St.

The menu will consist of turkey, ham, dressing, gravy, sweet potatoes, several vegetables and green beans, all kinds of salads and desserts, and drinks. There will be door prizes, music, and lots of fun. If you want to sit or bring new friends, please call Brenda at (936) 594-2625 and reserve a table if you have more than two people in your party.

The Christmas at the Crossroad’s 6 p.m. lighted parade delighted the crowd with music and dancing. The THS Drill Team did a dance in front of the Judges stand and they were in step and perfect formation. The THS Band marched in the parade a head of the fire trucks and sounded great.

This year’s winners were presented a miniature State of Texas plaque announcing what they won that were handmade by Tyrone De Hass. They will be rewarded with Trophies as soon as they arrive from the Trophy Case in Huntsville. The winners were:

·First Place Most Traditional: The Grinch Who Stole Christmas presented by the Trinity County Crime Stoppers.

The Sam Houston State University’s Jazz Ensemble was a real hit before the parade, but next year we would like for them to play sooner and pay more again after the Tree Ceremony.

The Tree Lighting Ceremony was perfect, and Mayor Billy Goodwin was there to welcome the people. Clegg DeWalt blessed the season and gave us the reason for the season through his prayer. The tree was lit and then the winners of the parade were announced by Clegg and Billy, and then the event was declared officially over.

The list they announced to thank some wonderful people who without their help we could not have put this show on are listed below.

·All Around Electrical Services

•The Blanch K. Werner Public Library of Trinity is having holiday-themed story time all month. Tuesday, Dec. 13, the patrons, and children are being served cocoa and making snow. The snow will be made outside, and each person can take a bag home.

Afterwards, Paula Holcombe will read a story while they have more cocoa and cookies. Later in December the Library will have its annual Storytime Christmas party, so watch this space for details.

In December the Library will offer curbside assistance for anyone feeling under the weather. Just give them a call at (936) 594-2087, tell them what books you would like to check out, and they will bring them out to you. Also, in December they are having a DVD sale at two for $1.

The next issue I will report all the Churches’ cantata times and places, and places you can attend to receive toys for children and food supplies.

Thanks for your continued support for Julia’s Tidbits.