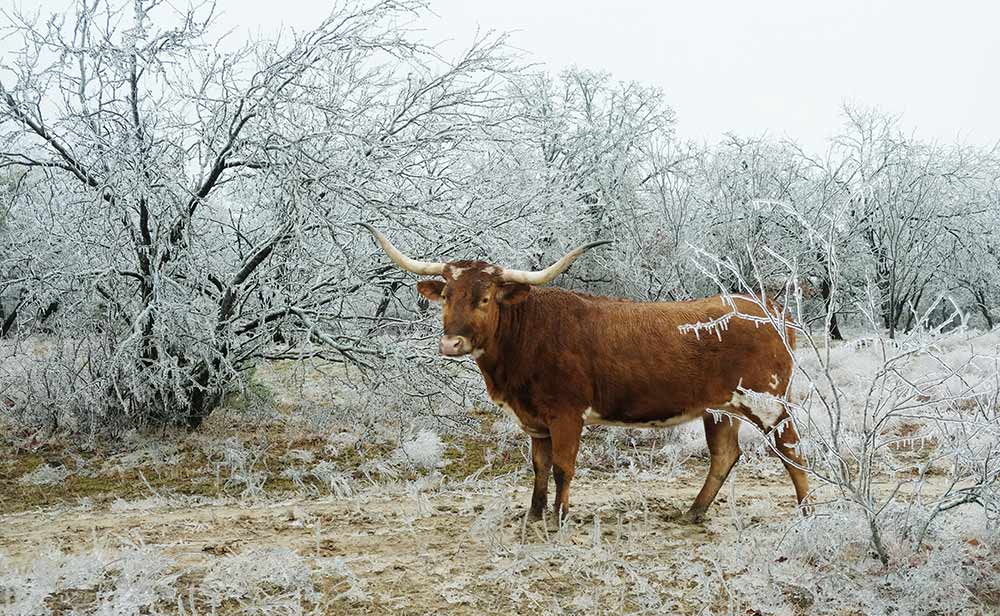 The Old Farmer’s Almanac is predicting January will bring significant snowfall to the state.

As Texas gets at least a temporary reprieve this week from the heat, with a nice round of rain blanketing much of the state, the Old Farmer’s Almanac is predicting January will bring significant snowfall to the state.

The periodical, founded in 1818, develops its extended forecast “using a 204-year-old mathematical formula focused on sunspot activity, planet positions and tidal actions of the moon.” The almanac’s website claims its forecasts are 80 to 85 percent accurate.

Since the secret formula was first developed by David Young, an astronomer and mathematician who was the almanac’s first editor, only seven people have been hired to develop the weather predictions.

A meteorologist for the National Weather Service interviewed by the Austin American-Statesman casts a skeptical eye on the almanac’s methods and predictions.

“There is little to no scientific evidence that sunspot activity and the position of planets have any impact on our weather and our climate,” Keith White said. “A lot of the statements they use in terms of what they expect over the course of a season are very broad and can be applied kind of subjectively by people.”

Neither the Almanac nor the weather service are predicting another Winter Storm Uri, which resulted in the deaths of at least 246 people in Texas in February 2021.

The Electric Reliability Council of Texas, which drew scathing criticism for the massive power blackouts during Uri, has a new chief executive officer. The hiring of Pablo Vegas was approved by the Public Utility Commission, which oversees ERCOT.

After Uri, most of ERCOT’s board resigned and its CEO was terminated. A number of reforms and protective measures have been implemented since Uri, though critics question whether the grid can withstand another storm of Uri’s magnitude.

The Texas Education Agency last week released the first A-F school accountability ratings for the first time since 2019, due to two years of the COVID-19 pandemic. The results show some improvement in grades, with 396 districts, or 33.1 percent, receiving an A rating. That was up from 301 getting the top grade in 2019.

Conversely, 16 districts got a failing grade, up from 14 in 2019. Among individual campuses, 2,356, or 27.9 percent, received the top grade, up from 1,750 in 2019. The number of campuses that received an F totaled 188, less than half the 402 schools that failed the accountability ratings in 2019. The ratings are based on three domains: student achievement, school progress, and closing the gaps.

Visit TXschools.gov to find grades for all campuses and districts. Users can search for schools using an address and compare schools as well.

Chuck Norris, the actor best known for “Walker, Texas Ranger,” has filmed a public service announcement to publicize the IWatchTexas community reporting system. The partnership between communities and law enforcement is designed to make it easier for the public to report suspicious activity, from school safety-related threats to criminal acts or terrorism.

IWatchTexas is not designed to report emergencies, which should still be reported by calling 911. It is one of several initiatives taken after the Uvalde school shooting in May, which killed 19 students and two teachers.

In the PSA, Norris concludes by saying, “Whether it’s criminal acts, terror threats, or someone wanting to harm children, if you see something, say something, and help keep communities in the great state of Texas safe.”

The state has added 736,700 jobs since July 2021, according to the Texas Workforce Commission. The jobless rate is now at 4.0 percent, its lowest reading since February 2020 — just before the pandemic shuttered businesses across the state.

“The decrease in the unemployment rate and growth in jobs is a testament to our innovative and resilient Texas employers,” said TWC Commissioner Aaron Demerson.

The most growth was in education and health services, which gained 14,300 jobs over the month. The lowest jobless rates in metropolitan statistical areas were recorded in Amarillo and Austin-Round Rock, both at 3.1 percent. The highest rate among MSAs at 8 percent was in McAllen-Edinburg-Mission.

With school underway and the Labor Day holiday approaching, the Texas Department of Transportation has launched its Drive Sober No Regrets campaign, with stepped-up law enforcement efforts to arrest drunk drivers.

The state saw more than 25,000 DUI-alcohol related traffic crashes last year, resulting in 1,100 fatalities and 2,560 serious injuries, according to TxDOT.

The number of COVID-19 cases during the past week in Texas dropped to 59,059, according to the Coronavirus Resource Center at Johns Hopkins University, a drop of 18.7 percent. The number of deaths reported stood at 223, up slightly from the previous week. The Texas Department of State Health Services reported 3,018 lab-confirmed COVID-19 hospitalizations as of Sunday, nearly even with last week’s count.