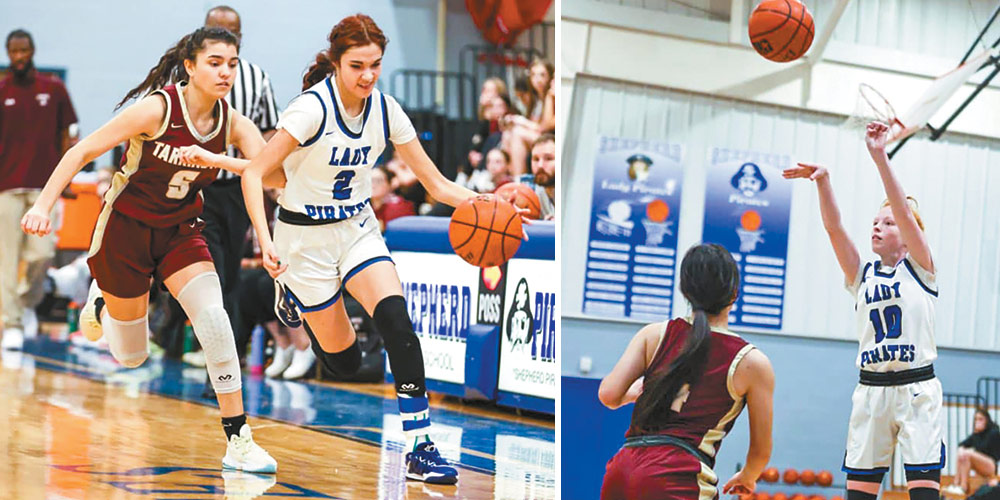 Lady Pirate Grace Ramos (No. 2) works around a Tarkington defender. Mckayden Nelson (No. 10) tosses up a jump shot. Courtesy photos

Despite the loss, Coldspring remains 2-1 in district play and 11-9 overall, and currently is ranked fourth in district.

The Pirates lost two district tilts last week, a 75-48 drubbing at the hands of Tarkington and a 66-51 loss to Crockett.

In the Tarkington game on Jan. 3, Jesse Valerie led scorers with 14, followed by Tristen Cullum with 12 and Payton Burton with 10. Braydon Mettlen crashed the boards for 9 rebounds.

Against Crockett on Friday, Valerie put up 16 points, followed by Cullum with 13. Cullum also led rebounds with 7.

The Lady Trojans were outclassed by Crockett on Jan. 3, losing 52-39 and dropping to 1-3 in district.

The Lady Pirates fell 52-17 to Crockett on Friday, leaving the team at 2-2 in district play.