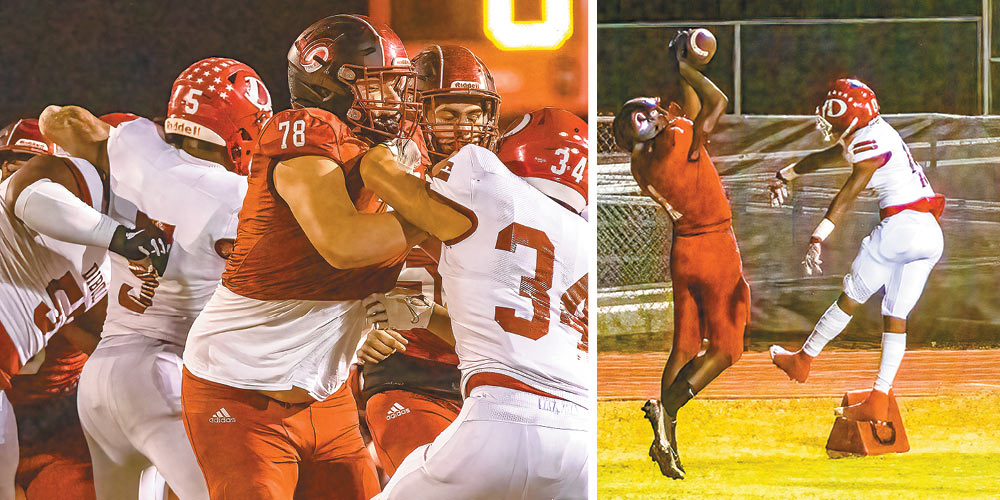 Malachi Piles (No. 78) blocks out the Jacks during the Diboll-Coldspring district game. Kelvin Harden Jr. grabs the first toss of the night and sets up the first TD for Coldspring. Photos by Larry Lamb

COLDSPRING — The Trojans improved their district record with a 20-19 win over Diboll on Friday.

Coldspring drew first blood by scoring first against the Diboll Lumberjacks; it did not take long, however, for the Jacks to find the end zone.

The score remained knotted at 6 until late in the second quarter, and with 27 seconds left on the clock that the Jacks posted another score.

The Trojans did not show aggression until their quarterback received a late hit out of bounds on the home side of the field, sending him out of the game. Hunter Mullins took over at quarterback, and the game momentum changed drastically.

The Trojans managed to post a quick TD during the last part of the fourth quarter, and the Lumberjacks were held scoreless to keep the squeaker win at home.

The Trojans had 246 offensive yards on 60 plays.

Monroe went 4-for-8 in the air for 58 yards, including a 30-yard reception by Harden.

The Trojans will board the busses and head up 150 to the Shepherd Pirate Stadium for the “Battle of San Jacinto” this week for the last of the district games.