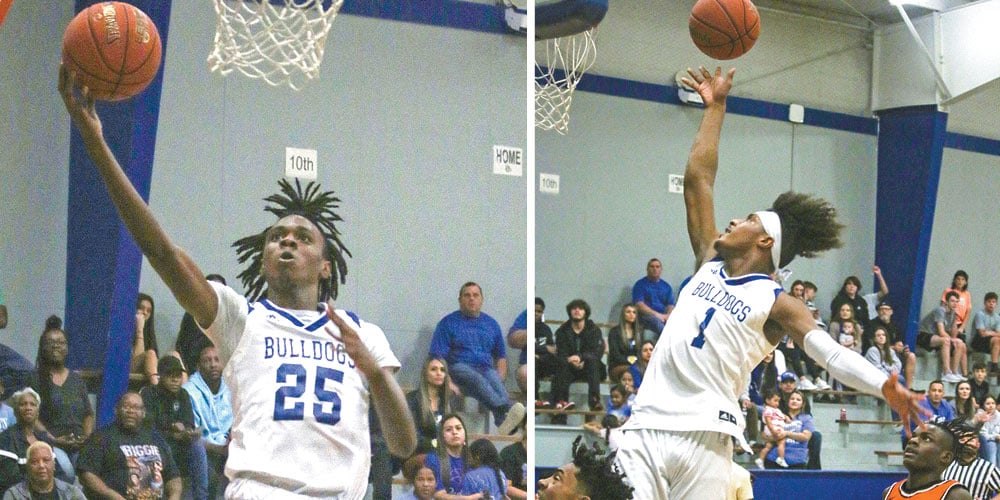 They are fast to the bucket on offense and like the ocean on defense with wave after wave. Corrigan-Camden basketball is not just good, they are undefeated and in first place through one round of district play. They are setting scoring records at the school this year and dominating many by putting up 100 points, or winning by margins like 95-9.

New head coach Greg Devers has poured gasoline on a program that began building a small fire over the past two years.

The Bulldogs did not seem to have it all together through one quarter Tuesday, but the final three were a showcase for the top team in 24-2A. They defeated West Sabine 95-44 to go 6-0 in district and 19-2 overall.

“The thing about it is, the last three or four games, we have been sluggish. We have actually either been tied or behind in the last four games (after the first quarter),” Devers said. “What our goal is, we are playing nine players every quarter and what we are trying to do is wear teams down. We start getting them in the second quarter like we did tonight where we went on a 31-point run. In the second half, we tend to blow them away, because most teams in our district don’t have the kind of depth that we do.”

West Sabine did not look like a team that had struggled to a 2-15 record early Tuesday. They contested shots, got to the rim, and kept up with the ‘Dogs for eight minutes, trailing by only one at 14-13.

A 31-12 second quarter extinguished any worries Bulldog fans had. Corrigan-Camden continued to score at a high rate, with 24 and 26 over the final two periods. Meanwhile, the Tigers were gassed. West Sabine was outscored by 50 points over the last three quarters.

Leading in the point column for the home team was Tony Cooper with 32, Tra Thomas with 25, Michael Kenney had 11 and Kam Wyatt added 10.

There are nine players on the team, and all nine get plenty of minutes for the Bulldogs.

“They are good,” Devers said of his bench. “That is going to pay off in the long run, because if we get into the playoffs and somebody gets in foul trouble, I have no problems putting somebody in that is on the bench.”

Corrigan-Camden has breezed through a round of district, but the coach that surpassed 400 wins in December has a plan to keep the team focused on its goals.

“One reason I have them focused is we have a big game this Friday against Timpson, the third-ranked team,” Devers said. “That has been our goal. After the Timpson game, we’ve got the second round, and then we are going to play a playoff preview. Hopefully, any problems that we have will show. Our half-court game needs to improve on defense. When we are not trapping, we need to play better defense in half-court man. It actually got a little bit better tonight.

“Other than the team I took to state at Coldspring, this team ranks up there with one of my fastest. I had some teams at Manvel that I can brag about, but this team gets after it. They all get along and that is the key. There is no selfish player on this team.”

After traveling to Timpson Friday, the Bulldogs are at Colmesneil for a Tuesday tip and return the following Friday to host Woden.