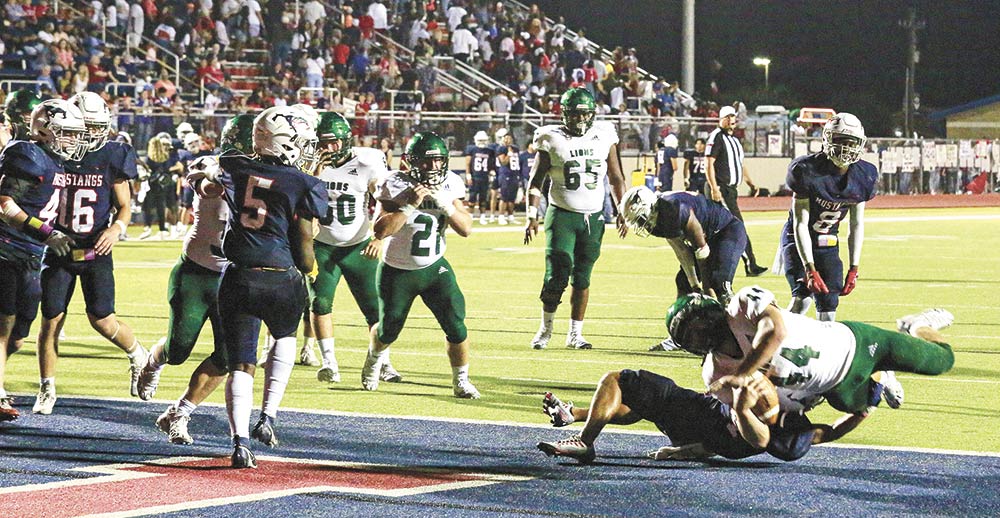 Connor Starr (44) scores a touchdown in the second half. Photos by Drew Dunson

The Lions rushed for 185 yards and threw for another 43, but the defense would top all performances Friday. The Mustangs accumulated just 102 total yards and had no answer for an attacking group that lived in their backfield.

Madisonville started the scoring with a 24-yard field goal after getting good field position on an interception in Lion territory. A 31-yard pass set them up with first-and-goal, but the Livingston defense would hold the home team to a short kick through the uprights.

Another turnover would produce the next points, but this time it was the Lions recovering a fumble on the Madisonville 15 yard line and driving five plays for a Jontavian McNeal 3-yard score.

“We came to play tonight. You can’t play high school defense better than that,” Livingston coach Finis Vanover said. “They had 17 yards at halftime and the staff and the kids went to work and they weren’t going to allow any more of that crazy scoring. We gave up a couple of runs, but they have some kids that can play too. Our kids played defense as passionately and soundly as you can. Our defensive backs covered like crazy in man coverage against two college-level athletes. We did a good job on special teams not letting them have anything.”

The best performance of the season comes just a day after what the coach called a “terrible practice,” where the team was kicked off the field midway through. The only negative was in 10 yellow flags thrown against the team in green.

“The drives were beautiful and then we would sputter. We’d have a big play and then it would get called back,” Vanover said. “I think we had seven in the first half that were killed on penalties and it’s just foolish. We missed an opportunity to just have a dominant game on both sides. We told them at the half that we’re not doing anything cute, we’re going big boy football. We told them that we didn’t think they could hold up to it. They couldn’t.”

A blocked punt near the end of the half put Madisonville on the Lion 5 yard line with just five seconds left. The pass defense would hold the Mustangs in their attempt for the end zone, batting down a pass on a slant pattern as time expired.

The Lions went into the locker room at the half up 7-3, holding Madisonville to just 17 yards of total offense for two quarters. Even the homecoming queen had better rushing stats than the Mustangs at halftime. They had negative 14 yards on seven attempts.

Livingston took their first possession of the second half for 60 yards in three plays, highlighted by a Conner Starr 49-yard run and finished on a McNeal 6-yard quarterback sneak. Both the offensive and defensive lines for the Lions were superior to their counterparts. The offensive line with Jonathon McNeal, Jace Morris, Evan Grimm, Eli Steagall and Bryce Stiegler helped the team win the time of possession battle.

The next Livingston possession also resulted in seven points. This time, a 12-play, 42-yard drive drained eight minutes of clock and ended with Starr in the end zone from three yards out. The Lions had to fight off several penalties near the goal line to eventually go up 21-3.

Madisonville made the game a bit closer when backup quarterback Jeramiah Burns ran for 38 yards to close the game to within 12, but the Lion defense stiffened from there.

Starr had a big game on both sides of the ball. He, along with Jatarius Randolph, Zaylon Bogany, Cameron Wright, Jarius Crew and Xavier Mendiola formed a dominant defensive front. The senior was also the leading rusher with 71 yards and a score.

“We were just really shutdown,” Starr said of the strong Lion defense. “Coach (Dalton) Murray put in a good game plan where we were just coming off the ball as a d-line and just put us in the best position to win and get some sacks and tackles for loss to make sure they don’t score. They weren’t stronger than us, and Coach Vanover conditioned us all offseason to get ready to be stronger than everybody else, and it showed. We played harder and stronger than everybody else out there. (Coach) put us in the best position to win and the team came together.

We said that we want to win and we are tired of losing. It was real fun.”

Vanover said it has been a while since he’s seen a Livingston team look as good as they did on Friday night.

“It is a different bunch and I couldn’t be more pleased with them. Our coaches kept them fresh and rotated them and had everybody zoned in. Everything matched what we have been doing for three weeks.”