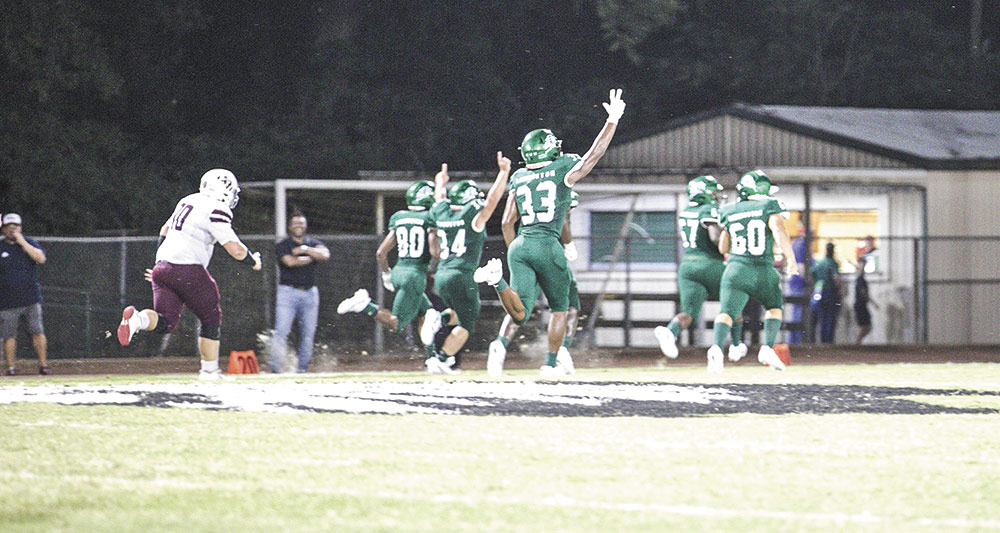 Zaylon Bogany (second from right) scoops a fumble and scores from 74 yards out. Courtesy photo

Livingston football has entered the win column, scoring on their final drive to beat Spring Legacy 48-47 for homecoming Friday at Lion Stadium.

The Lions found themselves down 47-42 in a game that they led most of the way. They took possession at their own 35-yard line with 5:27 remaining in regulation. They would march 10 plays down to the Spring Legacy 5-yard line.

Facing a fourth-and-one on the 11th play of the drive, quarterback Ta McNeal (137 rushing yards) took the snap and ducked his head into the line. He would receive a momentum boost from teammate Landon Leggett, who shoved him from behind.

When McNeal landed, the arms of officials went into the air, signaling the Lions had taken a one-point lead at 48-47.

After missing the two-point conversion, Livingston (1-3) would hang on for the final 23 seconds to capture their first win of the 2022 season.

“That tested everything we have in our souls,” an exhausted, but satisfied Finis Vanover said after the lengthy struggle. “We told them all along that this was the best two-week period we’ve had since I’ve been here. Last week, we lost and we didn’t get down, but we played good enough to win. We killed ourselves with some penalties, but we played good enough to win because we practiced that way. We came back Monday and had the best three consecutive days with not one problem or homecoming or the parade — and we had the best practices we’ve had in four years.

“We told them before we left the locker room that God rewards people who earn things and do things the right way. For two solid weeks, they have done nothing but earn the right to have a chance to win. If a group of young men ever deserved to win, those guys have done what it takes. These guys (pointing to Legacy) are explosive as heck. They have some cats that can go in a hurry. We said all along that we have to get a two-score lead on them. They got right back in it with those explosive players. We had to fight our way back and do it again.”

After falling behind 7-0, the Lions reeled off three consecutive touchdowns. McNeal ran in from a yard out, Trendon Williams (115 rushing yards) sprinted for 85 yards and the longest play of the season to this point, and Zaylon Bogany scooped a fumble and rumbled for 74 yards to put the Lions up 21-7.

McNeal would score once more for a total of three on the night, Chevy Peters caught a 20-yard strike for a score from McNeal, and Connor Starr took a handoff in for 14 yards, adding to the Lions’ scoring tally.

The Titans (1-3) are a very athletic team, but undisciplined to the point of sloppy at times. The home team was able to take full advantage by piling up 360 rushing yards.

“Our kids blocked them beautifully and the backs ran like crazy,” Vanover said. “Ta did a great job seeing things and keeping us rolling. I couldn’t be more pleased. We showed up tonight and I think folks are going to see a new team from henceforth.

“The two of us got in the ring in the last two rounds and nobody ducked. We lined up and took every punch and came right back and had a follow-up punch ourselves. We took it down to drive it and kept it in bounds and used our timeouts wisely.

They played magnificently. The defense made great plays and they got killed, but those guys are talented. Nobody got down and nobody turned. It is a new bunch and we saw it happening last week. There was no question on Wednesday that we were about to win this game. I told them then that it was going to come down to the last possession or we would win by 30.”