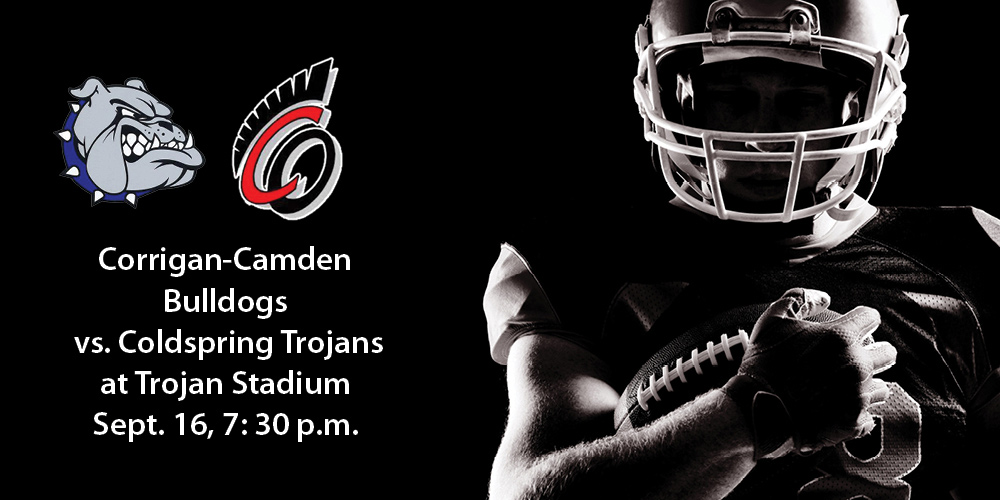 The (3-0) Corrigan-Camden Bulldogs go on the road to play the (2-1) Coldspring-Oakhurst Trojans in a non-district matchup this Friday.

After an early season win streak, the Bulldogs may have their hardest test so far, as they visit Coldspring for what is expected to be a physical four quarters on both sides.

Although head coach and former Bulldog Brett Ratliff remembers playing the nearby Trojans his senior year almost 15 years ago, he is prepared to face the same overall style of offense Coldspring is traditionally known for.

“[Coldspring] has not changed much as far as being physical, athletic and well coached.” said Ratliff. “They are a very good football team and that is why I wanted to play them. They run a ground-and-pound type offense that we need to see, especially when we try to get ready for [teams like] Centerville later on in the season.”

The Trojans, currently led by Coach Ken Stanley, are coming off 42-12 road loss versus the Hamshire-Fannett Longhorns last week.

Coldspring had a strong start to the season, first beating the Liberty Panthers 28-21 on the road, followed by a 34-7 victory at home over the Splendora Wildcats.

Over recent years, the Trojans have had overall success against teams that Corrigan is more familiar with, including Crockett, Diboll, Kountze and Woodville.

Last season, Coldspring finished with a 5-1 district record and lost a first-round playoff game 30-6 against the Anahuac Panthers.

“[Monroe] is kind of that dealer back there that knows how to hide the ball well.” Ratiliff said. “I also think he is their best overall player. He plays quarterback and he will also come in to play safety as well.”

Coldspring’s defense will include another key playmaker in senior end Chrishun McGowen, according to Ratliff.

“They will have one of the best defensive ends we will see this year in McGowen. He is talented and is a good-sized kid and gets to the ball quick.” said Ratliff. “He is a prototypical college player.”

Ratliff is counting on Friday’s matchup to be a test of will and conditioning for his now-matured varsity squad, relating it to a pair of fighters in a long sparring session.

“I amount these types of games to when you are training for boxing.” Ratliff said. “That is going to be us for 48 minutes. We are going to put our foot in the tire and see who can last the longest.”