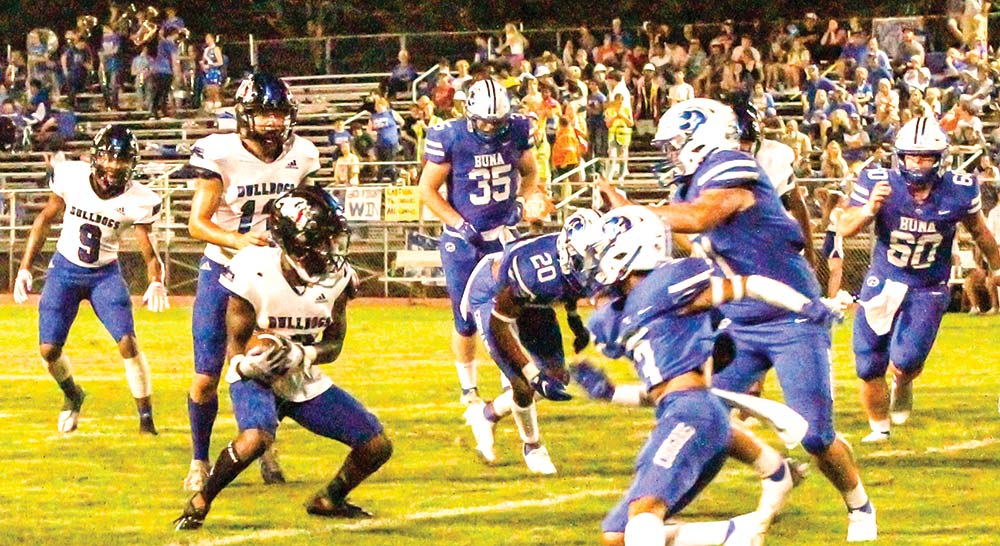 The Corrigan-Camden Bulldog controlled the early momentum Friday night and held on for a 28-21 week-one victory against the Buna Cougars.

Despite a late rally from the Cougars in the fourth, the Bulldogs established a decent halftime lead and finished the second half by managing time of possession and making the right plays on both sides down the stretch.

“Buna is a really good football team. I do not care what the record was last year,” said Bulldog head coach Brett Ratliff. “They got a lot of kids back. [Johnson] is a really dynamic running back. They are big, fast and strong in places.They gave us all we wanted at times…That could have demoralized us, but it did not. It just fired us up.”

Buna struck first on the opening possession with junior running back Jacob Johnson easily taking chucks of yardage most of the way. Sophomore running back would reach the end zone to finish the drive for a six-point lead. The extra two-point attempt was stopped by Corrigan.

Corrigan senior JaVarion Williams countered a holding call on the first Bulldog possession, stepping around several tackles to reach near the red zone. This set up a pass from senior back Morgan Rayburn to junior receiver Bayden Lawrence approach the goal line going into the second quarter.

Senior quarterback Christian Guzman finished with a short dive for a touchdown to take the 7-6 lead with the extra kick.
Later in the second, the Bulldogs capitilized on a sack fumble recovered by senior lineman Nate Blalock. Rayborn connected on another huge pass to senior back Anthoney Harrell to get near the red zone. Williams would find running room along the left side for a touchdown to extend the lead to eight points.

In the final moments of the half, Corrigan’s offense got another short field after a shanked punt by the Cougars. Harrell made a big first-down run, added on by personal fouls by the Cougar defense.

From inside the five, Wiliams would punch it in for another short touchdown run, making it a 21-6 halftime lead for the Bulldogs.

Corrigan would control time of possession for most of the third quarter and beyond. Also, be able to counter two late scores from Buna.

“I told the guys I wanted a long, hard and physical drive [to start the second half.] It banged us up a little bit too, but it took ten minutes off the clock and we got a touchdown to go up [three scores,]” Ratliff said. “We breathed a little too much after that…They popped two touchdowns in and put us in a bind. We just have to relax like we did at the end and finish it out.”