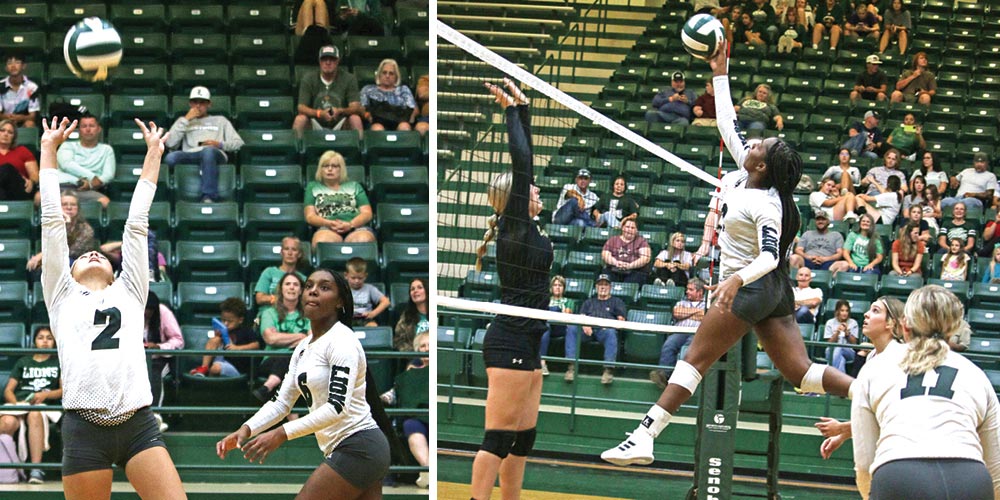 Kirbie Evans sets for a teammate. N’Ziya Washington gets up for the spike. Photos by Brian Besch

Lady Lion volleyball delivered a sweep at home in Tuesday’s spike action over the Lady Eagles from Woodville 25-14, 25-18 and 25-19.

Livingston led 6-0 in the first set, yet allowed Woodville to remain in the contest for a bit. The second was competitive throughout with several long volleys.

The final set was tied 6-6 when the Eagles went on a run. They led 15-8 at one point, before surrendering a 13-2 sequence from the Lady Lions.

“We’ve got a lot of new faces and we are really young, so we are still working out some of the kinks this early in the season,” Woodville coach Amanda Howard said. “We will definitely improve. Our tournaments last week when we played some 5A and 6A schools, we played really well. I would love for them to get their skill level back to where it needs to be. I am trying to get us better for district, so that we are playing all of the tougher teams in the beginning of the season.”

Woodville has four wins so far this season, including a triumph over district foe Hemphill.

“I graduated seven seniors last year and five of them were starters. We are starting completely over. They look good, so we will get better. We played Huntington in our playoff game last year, so district is going to be competitive. Central Heights I’ve heard is the one to beat. I haven’t been able to see them play in person, but Huntington and Diboll both look really good.”

For the Lady Lions, Coach Heather Mosser has a work in progress. She is awaiting the return of a few players and has some playing a different position for that reason.

“Our starting middle hasn’t played at all and was out before we even started the season. Braylee Garrett should be back next week. That should change our dynamic up a little bit – I hope for the better – because I have some people that are playing out of position. It is pretty evident at times.”

Mosser referenced a competitive district when talking of the work early in the season. She does not believe her team is currently at the level necessary to compete.

“Anybody that we play this year is going to be very challenging. It is not going to be an easy road. That is good and bad. It is good for us to know that we have to compete at that level. Kirbie Evans is really leading on the court and hustling her butt off. I have her playing as a setter, because if I take her off the court, it falls apart a bit. That is big for her, because she was not always a go-to player, especially last year. I feel like this year she has really stepped it up.

The coach also praised the talents of N’Ziya Washington, who she called “a force” in the middle.

“We are just working on her volleyball technique. She is super athletic, but we just have to get her to where she is more volleyball-minded. I think that is the majority of my team. We have athletes out here, they are just not super volleyball-minded. Bailey Yantes and Ava Hartsell are both my left side. They are on when they are on. When they are off, we really struggle. I am looking for more consistency, but it is early in the season.”