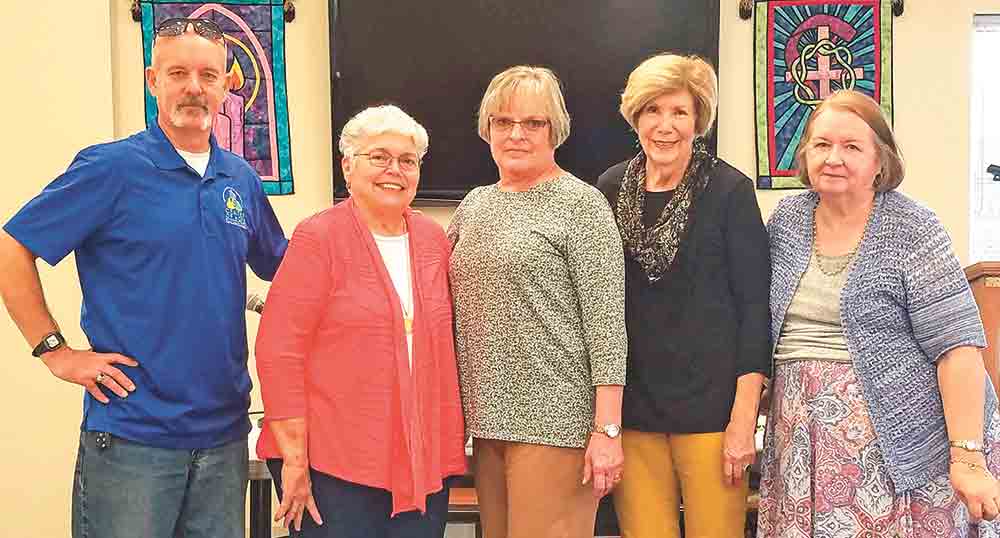 The Polk County Chapter of the American Association of University Women (AAUW) recently heard a program about the ministries offered by Center of Hope, as well as its recent merging with Empty Stocking Program and Emergency Health Board. (l-r) Mike Fortney, Virginia Key, Chris Potthoff, Genny Watkins and Peggy Wooten. Photo by Emily Banks Wooten

Michael Fortney, Peggy Wooten and Chris Potthoff presented a program explaining the merging of Polk County Emergency Health Board with Center of Hope to the Polk County Chapter of the American Association of University Women (AAUW) during the chapter’s regular meeting Monday.

Fortney started by giving an overview of what Center of Hope is doing before segueing into the transition. Fortney said he moved to Polk County about five years ago after 39 years in the Air Force. He said he had been here five or six weeks before Hurricane Harvey happened. He said his philosophy upon moving to a new place is to “find out where God’s already doing work and join them.”

“We have seen the numbers absolutely skyrocket. The average number of people we see daily is in the mid-70s,” he said.

Fortney said Center of Hope is considered a platinum-level food bank and through its partnership with the Southeast Texas Food Bank is able to receive food for 18 cents a pound.

He said the Center’s other ministries began evolving after Hurricane Harvey and then the tornado, starting with disaster response.

“FEMA came in and did an assessment and we did not meet the threshold to receive federal funding so volunteers came together and we began doing home repairs for those that did not have insurance,” he said.

“Another ministry that has evolved over the last five years is the cancer support group. Right now there are 70 active clients. What does that look like? There are people that were putting off life-saving treatments because they couldn’t afford parking or something was wrong with their car and they couldn’t make it to Houston,” he said, adding that they help with gasoline, parking, occasional overnight stays.

Fortney said the Center also has a bus ministry with a bus that was donated by Brazos Transit.

“We can help address other needs. Our counselors are trained to plug them (the clients) in to other ministries,” he said.

“Campaign 300 is a separate non-profit but is under the umbrella of Center of Hope. They help families going through financial crises. It could be an automobile emergency, but typically is utilities,” he said.

Fortney then talked about two new ministries. One is Christmas of Hope Empty Stocking Program. He said Center of Hope was approached last fall and asked if they would consider taking over the Empty Stocking Fund. He said that Brad Butler is over it.

“Right around 600 kids were blessed throughout that ministry to the tune of about 5,500 gifts,” he said.

Fortney said that around spring of last year Peggy Wooten reached out and said the Emergency Health Board seemed to fit with what the Center was doing and asked if they would consider taking it on.

“It was unanimous. We said let’s bring the prescription ministry under our wing,” Fortney said.

“I thought it was a very good transition. I think it went very well and it was such a blessing that Center of Hope was willing to take it,” Wooten said.

In closing, Fortney said that if anyone wants to help Center of Hope, they are always needing money and volunteers. Contributions may be mailed to Post Office Box 1973, Livingston, Texas 77351.