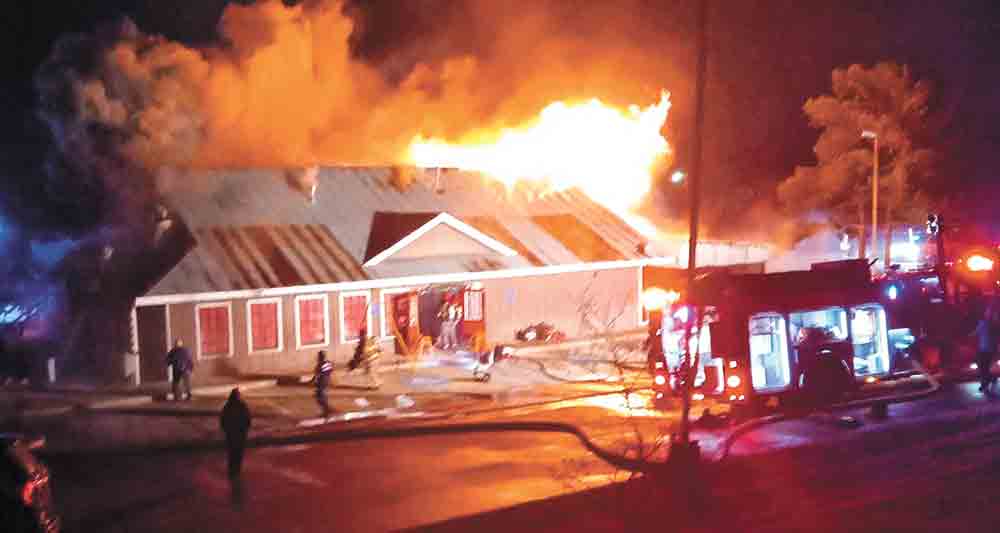 Forty-three firefighters from five area volunteer fire departments responded to a fire at The Mason Jar Bar & Grill 2 located at 200 Southpoint Dr. in Livingston at 10:41 p.m. Dec. 28. Although there were no injuries, the restaurant was a total loss. The cause of the fire is undetermined but is still under investigation. Photo by Jessica Corwin

Local volunteer fire departments have been busy with many calls over the last two weeks.

“There was on older farm-type house. There was a power outage and the occupants left. They were notified the power was back on, so they returned and found the house on fire. Shortly after the power was restored the fire was started and was quickly involved. It spread and got to some hay and a pasture and was a total loss,” LVFD Chief Corky Cochran said.

LVFD responded to a house fire on Milliken Drive in Thunder Mountain Subdivision at 7:36 p.m. on Dec. 23.

“It was a wood-frame house and the owner reported they’d had an electrical issue prior. They were gone down the street and came back and it was well-involved. They had two dogs that did not survive,” Cochran said.

Two trucks and 18 firefighters responded, in addition to the Livingston Police Department, the City of Livingston Electrical Department and EMS.

“It was an outbuilding and storage shed. We’re not sure how it started but they did have a heat lamp with eight puppies. The back part was totally destroyed and an attached shed was heavily damaged. The eight puppies did not survive,” Cochran said.

A call was received at 8:07 a.m. on Dec. 27 of a structure fire at 452 Powell Lane. Cochran said it was a fully involved one-story frame house that was heavily damaged. Livingston had two trucks and 13 firefighters respond. Scenic Loop VFD had one truck and four firefighters respond. Also responding were the Polk County Sheriff’s Office, Sam Houston Electric Cooperative and EMS. Cochran said the cause is unknown.

Firefighters from Livingston and Holiday Lake Estates VFDs assisted Goodrich VFD with a pasture fire on Moffett Road at 10:52 a.m. on Dec. 27, with each department bringing a brush truck.

Two trucks and 10 firefighters from LVFD responded to a major head-on collision at 1:41 p.m. on Dec. 27 on Hwy. 146 near Hermes Fireworks.

“There was no entrapment but some serious injuries. We assisted with traffic control and EMS,” Cochran said, adding that the person who caused the collision was on the run from a previous accident by Melbo’s. Other’s assisting included Livingston Police Department, Polk County Sheriff’s Office and EMS.

“It was after hours and the property-owners were there and heard an alarm and saw a haze of smoke. They went to the back of the building and encountered fire and called 911,” Cochran said.

“We arrived at the scene immediately and the first on scene advised there was heavy fire showing on the east end of the building. We began an interior attack and had been there about five minutes in the kitchen area when the ceiling started coming down. We backed into the restaurant area and tried to pull the rest of the ceiling down but as they were backing out, the ceiling structure was coming down,” Cochran said.

“It was a solid wood ceiling, so we had to leave the building and go to a different mode. As we were leaving the building, we had to leave a nozzle, fire hose and a ladder. We later were able to find the nozzle. The hose burned up and I’m not sure about the ladder,” Cochran said.

“It started on the outside of the building and it appears the fire may have been burning for some time. It had an A-frame attic and we discovered over three-fourths of the entire attic was engulfed. The cause of fire is undetermined but it’s still under investigation trying to determine cause,” Cochran said, adding that there were no injuries and that it was a total loss.

LVFD assisted Goodrich VFD with a house fire in Shiloh Ridge on Gettysburg at 7:35 a.m. on Dec. 29, sending an engine, a tanker and four firefighters.

Two trucks and six firefighters from LVFD responded to a vehicle fire at the Shell station at Hwy. 190 and FM 2457 on Dec. 30.

LVFD also worked a major accident at Melbo’s on Dec. 30 where a vehicle ran under a travel trailer. There was no entrapment so they assisted with traffic control and EMS. One truck and seven firefighters responded.