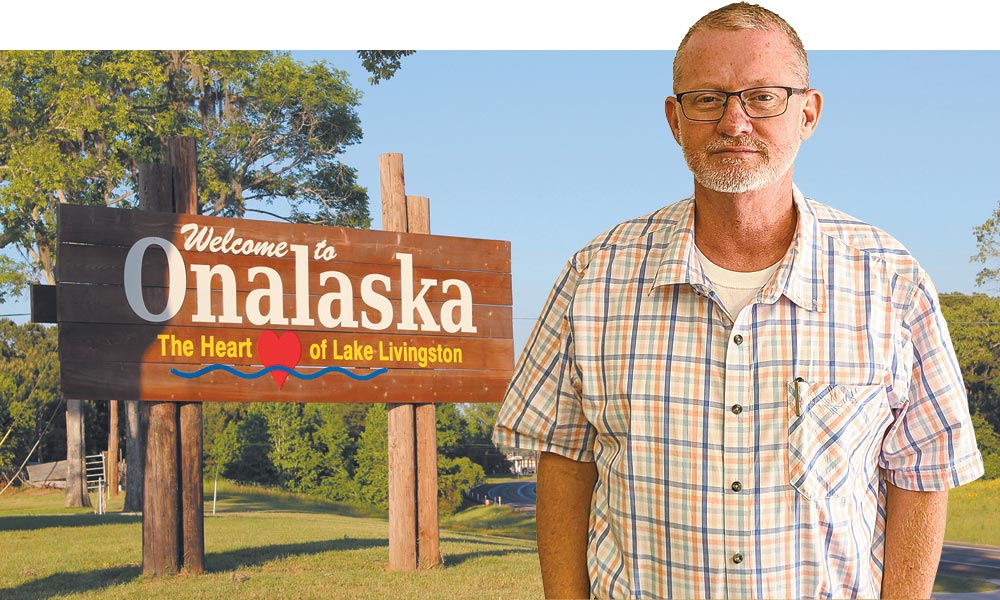 “When you have been here 50 years, you are kind of invested in your city, especially being a small town.”
— Onalaska Mayor James W. Arnett

Onalaska elected one of its own in May when James W. Arnett won the bid for mayor. That may not sound like a big deal in the majority of East Texas, but for a town that has seen a steady climb in population and so many move-ins, having someone who knows the town could have advantages.

The polls would say that is the case. Defeating Paul Laverty and Bart Goldsmith, Arnett convincingly took more than 64% of the vote.

“Even being on city council for close to 15 years, it is still a different learning curve,” Arnett said of his first few months. “Most of the time, you don’t know the ins and outs of the daily stuff, so you have to get up to speed on things that have been in the works that you might not be privy to being on council.”

Arnett grew up in Onalaska, not too far from city hall. About 15 years ago, Arnett said he got into council for a desire to help his community.

“When you have been here 50 years, you are kind of invested in your city, especially being a small town,” he said. “It has changed a lot. It is like Lake Conroe; you see the property values shooting way up because of supply and demand. Lake Conroe has sold out, so a lot of people are moving here because it is more of a rural city. We are starting to get to that point to where it’s not so rural anymore.”

The fingerprints of Arnett’s family can be seen throughout Onalaska. His father helped build the roads in the Canyon Park subdivision and helped in construction on one of the bridges before Arnett was born.

“The stories that I would hear from my great-grandmother — she kind of raised us — is they used to live in good farmland down there (where the lake is now). Her family used to work for the sawmill, because the sawmill used to be the biggest thing around here and bigger than anywhere else, from what I understand.

“You have seen the growth. You have to kind of embrace it the right way the best you can with city codes and things like that. Somebody asked me the other day about the population when I was a kid. It seems like I remember seeing a sign that said 300, 400 or 500 back then. We always had Smith Store and restaurant here, and up there where the donut shop is, there used to be a store there. When you would go out of town, there used to be a marina and restaurant. We didn’t have red lights and had a four-way stop sign. About 8 or 9 p.m., everything would shut down. Over there in Bridgeview, we used to go over there when we were kids and catch nutria rats and things like that and sell the pelts for $2 or $3. You can’t do any of that anymore. You could go fishing anywhere too, just pull up and put your pole out.It is totally different (now).”

Arnett said once the high school came in, change came about at a quicker rate.

“I want to say it was $13 or $14 million building the high school out here. As soon as they got finished with it, we had an influx and it was too small. Right now, they are looking at having to build another building at the high school. The elementary school here is just brimming and overfull. As each graduating class comes through, it keeps getting bigger and bigger. You can gauge it from there, the families that are moving in and population growth.”

He feels the city has gotten behind on its roadwork and infrastructure, and one of Arnett’s main goals while mayor is to play catch up on that issue. Prices to complete road work have soared, and issues that needed to be taken care of first — like recovery after the tornado — jumped to the front of the line. Onalaska was able to recover quickly from that deadly storm of April 2020, Arnett says, through the community supporting each other. Yet, one of the lingering effects that council is currently tackling are the houses that were left behind.

“I am pretty big on clean up. We actually just cleaned up nine abatement houses. It is a three- or four-month process. You send them the letters and follow the steps before you can do it, but we had nine on the books. We kind of went over budget on that, but that was expected. We actually have four that are left on the books that is going to have to wait until the next budget. You can’t really plan for (damage from a tornado). Luckily, the state came in and helped us clean up. There were debris contracts already in place. It was just millions and millions of dollars.”

The city is currently looking into grants to help financially with infrastructure that cannot be supported with city funds. A full-time maintenance worker has been hired and a difference can be seen in the right of ways and at the city park. On the right day, Arnett himself can be found helping clean the park. A long-range plan is to construct another restroom at the park.

The pet population has become another concern. The city has partnered with the SPCA and plans are for spay and neuter clinics, as well as free vaccine days. The hope is to set a September date in the near future.

The mayor said he sees a much different look to Onalaska in 10 years. Much of the area that is now woodland, he expects to be growth, if development keeps on its current trajectory.

“You hear about a developer wanting to do this and that, and if it comes to fruition, you will see a population growth that is more than the rest of the county. We are seeing a lot of residential, but it is a little bit of everything. There are some subdivisions that I hear about that will be developed with a little bit bigger tracks of land. There has never been growth around where I live, but going out toward the high school is experiencing growth and everything is selling even at today’s prices.

“I hear talk of a hotel possibly, and it is something that we really want. It kind of trickles back to fishing tournaments and different things that could be lured in for tourism money and just a weekend getaway. Since Covid, people are coming here for weekend getaways. Just me driving around and from what I understand, the trailer parks are always full and some of them are full-timers, as we call them, but there are a lot of those just for the weekend.”

The Enterprise learned from County Appraiser Chad Hill that property in Polk County has reached peak demand, with developers selling neighborhood plots before they can be planned. Arnett says it is no different in his area.

“They don’t have utilities or anything like that and if they hear that it is going to be developed, they want to buy it from you. There was one at the Trinity County line like that and they sold every lot in there. It ranged from five to 10 acres and they are steadily building houses out there now.

“It would be nice if we could attract a big industry-type business and something that sustains 100 or 200 jobs. That would be such a beneficial deal out here. We’ve kind of looked around, but it is hard to attract some business types.”

Arnett said the lake is the obvious attraction to Onalaska, but feels many are moving out of the cities to the area for the laid back and rural lifestyle. He related stories that it is still the type of town that people wave and talk to their neighbors, one where you know most everyone in the neighborhood.