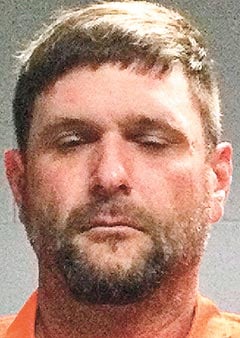 A former detective with the Trinity County Sheriff's Office, Polk County Sheriff's Office and Polk County District Attorney's Office has been charged with theft.
On Wednesday, the Onalaska Police Department was dispatched to the Dollar General Market in reference to a theft. Once arriving, the complainant stated a male subject left the store and did not pay for merchandise. Upon watching security footage, law enforcement immediately identified the male subject as Christopher Lima.
The complainant stated Lima appeared to have used his card to buy the items he scanned, but did not finish the transaction. After Lima left the store, the complainant was able to run the transaction again, which showed the card used had insufficient funds.
Upon watching security footage further, it was determined Lima had "skip scanned" some pizzas, did not scan a 12-pack of Dr. Pepper, and a large gray rug on the bottom of the basket was not scanned as well. While Lima was appearing to use his debit/credit card, he told a "very young juvenile boy" to leave the store with the shopping cart. Soon after, Lima left the store as well.
A summary of the stolen items, according to the Onalaska police department, also include a box of sleep aid, one pack of paper towels, one package of dog food, a bottle of mustard, a bottle of men's spray, a six-pack of gatorade, a 12-pack of Mountain Dew, two packages of top sirloin, one package of ground beef patties and two packages of popcorn. The total came to just under $152.
Lima was terminated from his position with the Trinity County Sheriff's Office in September of 2021 after a joint investigation with the Texas Rangers.
He was arrested on a charge of conspiracy to commit possession of a controlled substance, a Class A misdemeanor.
Trinity County Sheriff Woody Wallace said he received a complaint from a resident of Walker County that witnessed something peculiar involving a deputy sheriff, and an investigation was launched.