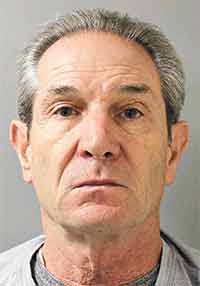 A Houston man who was repeatedly arrested for forging deeds to sell property that he did not own, across counties that included Harris, Polk and San Jacinto, has been sentenced to 10 years in prison, Harris County District Attorney Kim Ogg recently announced.

“People need to know that scams like this exist, and the scammers often target the elderly,” Ogg said. “And it’s important that these predators know that there are real consequences, including giving back all the money and prison time.”

David Bryan Scheffler, 61, was sentenced to 10 years by visiting state District Judge Randy Roll after Harris County prosecutors showed that Scheffler had swindled people in fraudulent real estate sales involving at least five properties across Southeast Texas, including Polk County and San Jacinto County, while he was on probation for the same crime in Harris County.

Scheffler, who had previously been on probation for theft by check of more than $1,500, was arrested in 2012 for forging deeds to sell property that did not belong to him amounting to more than $242,000, a first-degree felony punishable by a maximum of life in prison.

Scheffler agreed to pay back the money in 2014 and was sentenced to 10 years of probation. Instead of stopping his scams, he simply moved his criminal operation north where he began forging deeds to fraudulently sell property in at least two rural counties in East Texas.

He was arrested in Polk County in 2020 for forgery of a financial instrument and was brought back to Houston where the Harris County District Attorney’s Office worked to get his probation revoked and see that he was sentenced to prison.

“He would sell a property to an unsuspecting buyer without contacting the true owner and sometimes filed forged deeds in an effort to represent the estates of the deceased true owners,” Turner said. “He was not going to stop victimizing the elderly and unsuspecting public until he was held accountable.”

Precautions that property owners can take to ensure they are not being victimized include:

Checking appraisal district records online at least once a year to make sure all properties are still in their names.

Receiving a tax bill once a year. If they don’t, that is a red flag.