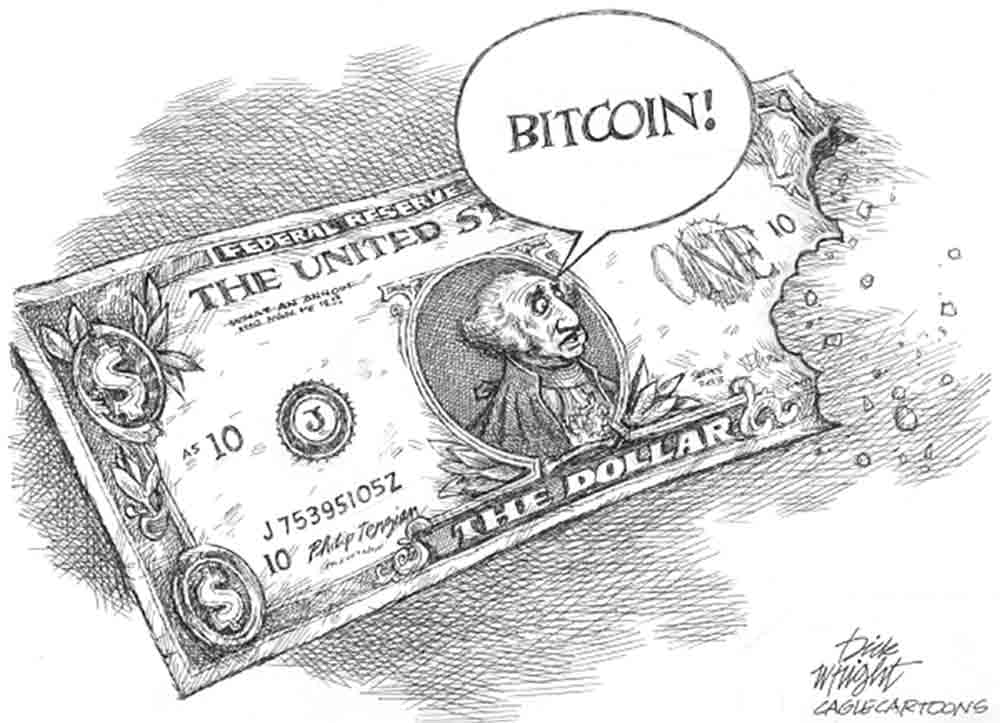 We’re all going to have to adapt to the way the Internet has changed global commerce and banking eventually. We can hold out a while longer by continuing to insist on paper billing and writing checks and using cash instead of debit cards or smartphones to make transactions.

Sooner or later though, the companies we do business with are going to force us into the 21st century.

As this is happening in other parts of the industrialized world, the United States is stuck in neutral. Money is still a store of value and a medium of exchange but while Americans still use $10 and $20, the rest of the world (especially China) is on the fast track to zeroes and ones.

Cryptocurrency – “crypto” for short – is the future of global finance.

To the extent most people know anything about it, they see crypto as something that exists only in cyberspace. It’s for geeks to worry about, not normal people. That’s wrong. It’s a private mechanism for exchange that is fungible and can be used to purchase anything from legal goods to items considered extremely illicit, so long as the buyer and seller can come to terms.

Sometimes that means trading crypto, which goes by many names besides Bitcoin, for real money. Yet for centuries people have used things besides paper and coins like rare gems, precious metals, and other commodities when engaged in transactions. Crypto falls into that category, too.

The reason America is so far behind the rest of the economically developed world is the absence of clear guidelines from the government. The uncertainty that’s created has left the U.S. industry at the mercy of regulators who can’t make up their minds about what crypto is and what rules should apply.

The U.S. Securities and Exchange Commission, led by Chairman Gary Gensler, is taking a punitive approach. It wants to force companies in the cryptocurrency business to submit to an as-yet undisclosed, improvised set of rules, ostensibly for the protection of investors. The Commodity Futures Trading Commission, which also wants jurisdiction over crypto, believes a light regulatory touch is required so the American crypto baby survives through its infancy.

The SEC’s approach is the wrong one, the consequences of which are illustrated by a case now being heard in the courts brought by the SEC against Ripple, a software company that uses the digital token XRP to expedite international money transfers.

The agency alleges that Ripple has been selling unregistered securities for distribution. It argues that XRP is a security based on the Howey Test, an 80-year-old legal doctrine that uses a four-pronged test to determine what constitutes an investment contract.

To drive its point home, the SEC made the charges retroactive to transactions going back seven years. That’s a signal to the rest of the industry to get in line or face the consequences. In its suit, the agency is essentially arguing it is not accountable for its failure to issue reliable guidance over nearly a decade. That’s not supposed to matter. Even worse, the lawsuit caused the value of XRP to crash for hundreds of thousands of people who were using it – many of whom never heard of Ripple.

Abrupt changes in regulation and the law can, as they have in this case, wreak havoc on the markets. Businesses are supposed to be able to look to the law to know what to do and depend on it to function consistently. Ripple and other holders of XRP are now being punished economically because the SEC changed its position on how the token should be treated.

If that kind of action is going to be taken, it should be done through legislation. The United States Supreme Court has been clear on that of late. Regulatory agencies don’t get to expand their work into new areas just because the person in charge, Chairman Gensler, thinks it would be a good, even logical move.

He doesn’t get to decide. The courts shouldn’t, either. It’s up to Congress to tell the SEC what to do here.

The outcome of this case could have far-reaching consequences for the entire fin-tech industry. If Gensler and the other Democrats on the SEC can reach so far beyond the bounds of their directive when it comes to crypto, what is stopping them from going after any industry they want?

Copyright 2022 Peter Roff distributed by Cagle Cartoons newspaper syndicate. Peter Roff is a media fellow at the Trans-Atlantic Leadership Network, a former columnist for U.S. News and World Report, and senior political writer for United Press International. Contact Roff at This email address is being protected from spambots. You need JavaScript enabled to view it., and follow him on Twitter @TheRoffDraft.