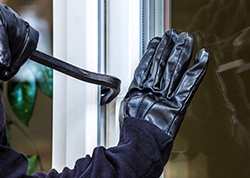 COLMESNEIL – Law enforcement is looking to the public for help in solving a recent burglary.

On the early morning of Saturday, April 9, two suspects smashed their way into Murray’s Quick Stop in Colmesneil and absconded with the cash register.

According to Tyler County Sheriff Bryan Weatherford, the suspects got away with some cash, but left behind video evidence.

Surveillance footage at the store showed their car, which is a silver, late-model Nissan Altima. What is notable about the car, according to a Crime Stoppers bulletin, is that it is missing its front bumper and grill, which, according to the bulletin, will make it easy to spot.

The two suspects, who are a white male and a white female, were wearing hoodies in the surveillance footage.

The Tyler County Sheriff’s Office has posted the video footage on its Facebook page.

If anyone can identify the burglars, they can submit a tip at 639TIPS.com, or tipsters can use the Crime Stoppers app, or call (936) 639-TIPS. Tips and calls directly to Crime Stoppers are anonymous and reward eligible.

With Crime Stoppers, the entire process, from tip to reward, is handled without identifying the tipster.