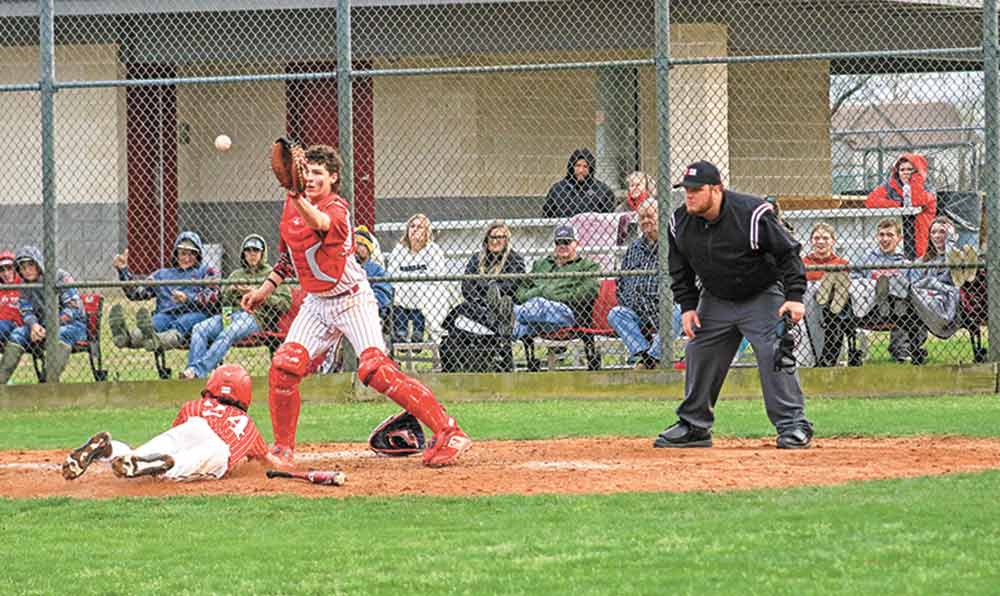 Groveton Indian Ashton Dain beats the throw for the score.

CENTERVILLE — In the 2A portion of district play, the Centerville Bulldogs lost two games over the course of the week.

On Friday, Centerville lost to Alto 13-0.

The Bulldogs managed only two hits in the loss.

On March 22, the Bulldogs lost to the Groveton Indians 10-5.

While Centerville opened the game with a 3-run first inning, Groveton answered back with 7 runs in the second and three in the third to nail the win.

For Centerville, Brayden Watson led hitters, going 3-for-4 with one run scored; and Logan Whittlesey went 2-for-4 with 2 runs scored. Jacob Rojas also scored twice for the Bulldogs.

Ayden Self and Jerry White shared pitching duties, with White being rocked for 10 runs on 9 hits. Self allowed only 2 hits and tossed 7 strikeouts.

For Groveton, Carson Antley led hitters, going 3-for-4 with 1 run scored, and James Williams and Kaleb Coots each scored twice.

Williams struck out 10 and Coots 8 as they traded mound duties.

The Indians’ second game, against Apple Springs on March 23, was tallied as a 15-0 win for Groveton.

The Lady Tigers fell to Onalaska 21-2 on Friday, leaving the team 0-5 in district.

Head Coach Chris Sexton said the Lady Indians are 3-1 in district play, as last week they beat Douglass 16-9 and Wells 10-0.

Against Wells, Megan Luce went 2-for-2 at the plate with 1 run scored, and Lexi Easterling drove in three runs with her 4 at-bats.

Shelby Arnold had a no-hitter and struck out 2 on the mound.

Against Douglass, Easterling went 4-for-5 at the plate and scored a run, while Bailee Reed and Luce each scored three runs. Luce also added a homer to bring her annual stats up to 6.