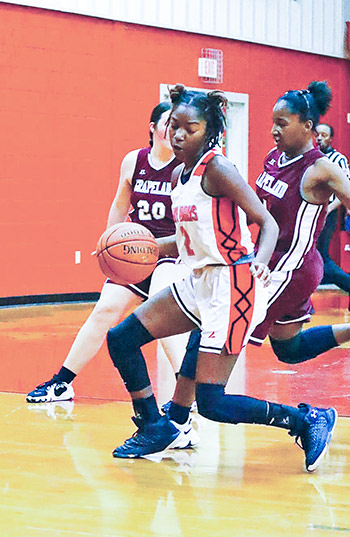 Lady Indian Bre McQueen (No. 2) looks for room during Groveton’s win over Grapeland on Dec. 17.Special to the
News-Standard

CENTERVILLE — The Eagles hosted Oakwood on Dec. 17 to open district play and  ended up on the right side of a 70-43 game.

Coach Greg Hollis said Centerville jumped out to an early lead, but Oakwood closed out the first half strong, erasing a 9-point lead with 2 minutes to go to tie it up at 25-25 at halftime.

The Bulldogs pulled way ahead in the third quarter outscoring Oakwood 30-10 to bring it to 55-35 going into the fourth. A tough, physical second half led to four Oakwood players fouling out, leading to a final score of 70-43.

Hollis said it was a breakout game for both junior Ayden Self, who had 22 points, and senior Devin Capps, who had 20 points. The two helped propel Centerville to a 1-0 district record.

The Bulldogs face cross county rival Apple Springs on the road on Jan. 4 to resume district play after the break.

The Lady Indians downed the Grapeland Lady Sandies to move to 1-1 in district on Dec. 17.