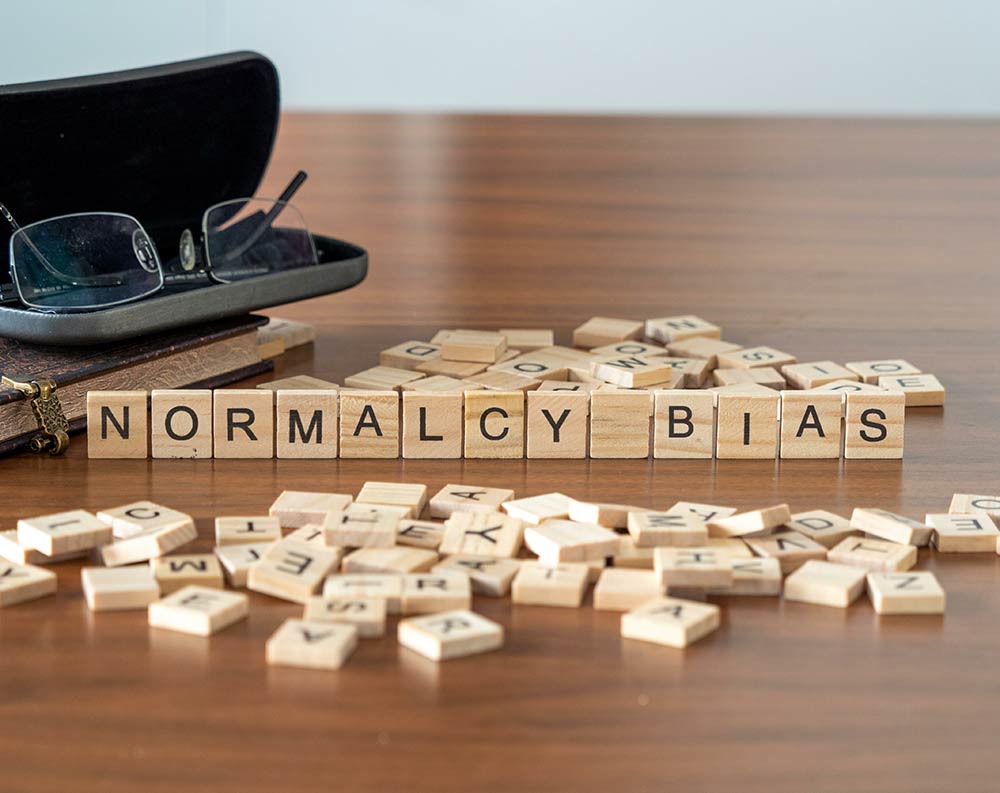 Normalcy bias is a cognitive bias where a person minimizes or ignores warnings based on an internal bias that probably has no factual basis. Normalcy bias isn’t a new psychological phenomenon. Some people might know it by a saying you may have heard your grandparents use, “like an ostrich with their head in the sand.” Whatever term you want to use, normalcy bias is real, and it can be a threat to our very lives, depending on how we deal with it.

The tendency to disregard or minimalize threats of disaster is not a matter of fear. It’s more of a denial of the situational facts combined with a resistance to make a decision about those facts. Psychologists have suggested that normalcy bias is an underlying mental state that inhibits a person’s ability to consider the possibility of catastrophe because it has never happened to them before. In other words, everything will always be “normal,” and nothing will interfere with this “normality.”

Normalcy bias is amplified in times and populations where people or groups have lived with a minimal level of discomfort and resistance. The more minor this discomfort, the higher the level of normalcy bias. Most people will ignore or minimize threats of disaster specifically as far as it affects them personally, usually out of some conscious or unconscious idea that:

Surely nothing bad can happen to ME.

“They” won’t let anything bad happen to me.

If something bad DOES happen, it won’t be that bad (after all, this is ME we are talking about)

If something terrible happens, it won’t last long, and things will return to “normal.”

Even if bad things happen and it does last a long time, someone will save me, protect me, or make it all stop, and eventually, I will have my happy life back the way I like it.

If bad things happen and last a long time and things DON’T go back to “normal,” the new normal will be better than what I have now.

Normalcy bias is caused in part by the way the brain processes new data. Research suggests that it takes 8–10 seconds to process new information even when the brain is calm. Stress slows the process even more. When the brain can’t find an acceptable reaction to a situation, it fixates on a “default” solution that may or may not be correct.

This cognitive bias has been described as one of the most dangerous biases we have. “Normalcy bias flows into the brain no matter the scale of the problem,” journalist David McRaney has written. “It will appear whether you have days and plenty of warning or are blindsided with only seconds between life and death.”

Normalcy bias causes bad decision-making and amplifies the effect of disasters (natural and unnatural). This bias causes people to panic when danger or suffering occurs because they have not had the ability or capacity to consider disadvantageous outcomes.

The most obvious example of the normalcy bias is found during emergency or disaster situations. Statistics say that about 70% of people experience normalcy bias at these times. It can cause people to drastically underestimate the effects of the disaster. The bias creates a “cognitive dissonance” or conflict that the brain must work to eliminate. You see this often in weather-related situations such as tornadoes, hurricanes, or through periods of extreme heat or cold. People believe they’ll be safe despite warnings from radio, television, or even information from neighbors, giving them reasons to think there is a risk. Some manage to eliminate the “cognitive dissonance” by refusing to believe these warnings, thus, in their minds, maintaining the normalcy bias. Add to this another bias called “misplaced optimism,” and you’re almost guaranteed a disastrous outcome.

Often, normalcy bias goes hand-in-hand with analysis paralysis. This “paralysis” occurs when a person has a deep fear of making the wrong decision or is so obsessed with making a perfect decision that their decision is delayed. Sometimes a person is so deluged with options that they can’t choose one out of the many. And sometimes it’s just a matter of over-complicating the process, or they’re so engrossed in imagining the outcome that the moment passes, and it’s too late to make a decision.

In 79 AD, in what is considered one of history’s worst natural disasters, Mount Vesuvius erupted, burying the Roman city of Pompeii and its 16,000 inhabitants. If the residents had evacuated the city instead of watching the volcano erupt for hours until it was too late, lives might have been saved. The Pompeii tragedy is one of the earliest examples of disastrous results from people’s inaction due to normalcy bias and analysis paralysis.

Normalcy bias affects us in everyday situations. If something minor seems wrong in your neighborhood, office, or home, how often do we ask people around us what’s happening? Or how many of us have heard a suspicious noise nearby, paused for a moment, and then thought, “I’m sure it’s nothing,” and gone back to what we were doing? The problem comes when, even when it is obviously something, people tend to remain in denial.

So can anything be done to combat normalcy bias?

The answer sounds trite but simply put, it’s a matter of awareness and training. As with most behavioral changes, it begins with that “aha” moment. To paraphrase Albert Einstein, “Problems cannot be solved at the same level of awareness that created them.”

This is why local fire departments encourage fire drills at home, businesses, and schools. It’s why there are dozens of tv shows and YouTube videos that focus on survival tips. It’s the reason for active shooter training classes, tornado drills in schools, and city emergency planning. All these are attempts to teach us to react differently when faced with unfamiliar circumstances and disasters.

We must be open to the idea that just maybe our judgment isn’t always the best. By changing our perspective, we could make better decisions in emergency situations. And the next time you are faced with a “warning,” whether it be about a weather event or something that might affect your livelihood or your ability to provide for your family, take a moment and consider your reaction. Don’t dismiss it just because “it’s never happened to me before.” And don’t fail to react because you think someone will be your “knight in shining armor” and rescue you. The responsibility is on us as individuals to learn how to overcome normalcy bias and be prepared for what may lie ahead.

Jan White is the community editor of the Houston County Courier