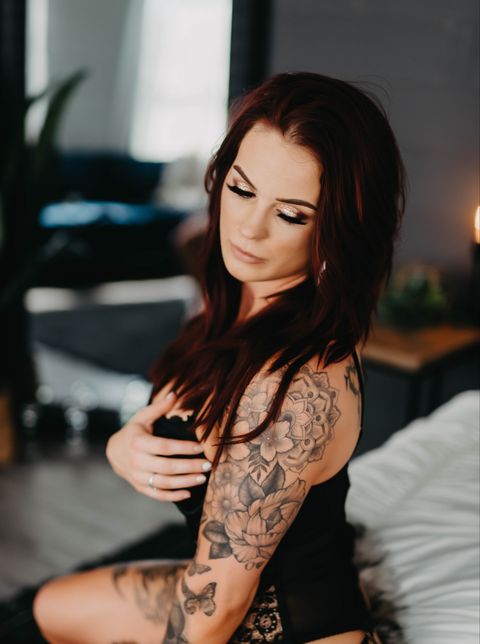 TRINITY — A Trinity County girl is hoping to grace the cover of a magazine that focuses on the art of tattoos.

Destiny Sigford has made the Top 15 in her group, even claiming the top spot, and hopes by Thursday to make the Top 5 and enter the quarterfinals of the Inked Cover Girl competition.

“The only difference is you don't have to reapply (tattoos) every day,” she said.

Sigford decided to enter the competition for several reasons, but most importantly because she said she has been her own worst enemy.

“I have stood in my own way most of my life,” she said. “If I think there’s even the slightest chance I might fail at something or disappoint my kids or my family, I let those doubts keep me from trying. I am trying to approach opportunities like this with a different mindset. At the end of the day, I have nothing to lose and everything to gain.”

Sigford attended school in Trinity off and on growing up, and eventually her family purchased property near the county line a few years back.

“I studied nursing at TVCC in Palestine and Angelina College in Lufkin,” she said. “Nursing was never my dream career though so when I was offered a job as a field clerk for an oil and gas company in South Texas a month after I turned 18, I decided to take it.”

Still, the journey wasn’t easy, which led to some personal struggles.

“I struggled with a reliable vehicle and was living in government housing,” Sigford said. “Fast forward 10 years later, and I have moved over from the contractor side of things to inspection. I still reside in Trinity technically, but I rarely get to go home. I love my job, but everything is so unpredictable in this field and I'm tired. My girls are tired of living out of an RV and switching schools constantly.”

After struggling with depression and self-acceptance, Sigford started a fitness journey; that, combined with her love for tattoos, became a good way to celebrate her transformation.

“I feel like if I won, it would send a powerful message to other women or struggling mothers like me to go after their dreams,” she said. “Don’t be a victim to your own doubts. It doesn't matter if you are the underdog or the deck is stacked against you; if it could change your life and you have nothing to lose by trying, go for it.”

Aside from facing personal challenges, the competition itself will be tough for “just your everyday small-town gal from Texas.”

“I’m going up against women who are popular influencers on Instagram or already modeling for other companies and have a huge following across multiple social media platforms,” she said.

Sigford said that if she won the competition, the money would let her go back to college to be a civil rights attorney, or perhaps taking a course at Texas Laser Institute to get certified in micro-blading and shading and possibly opening up a small business.

“I hope that I could make enough money doing that to get me through law school,” she said. “I'm going to need all the support I can get, and every vote is going to matter as the competition progresses.

“I never expected the amount of support I have gotten since public voting started on Jan. 18,” Sigford said. “Even if I don't take anything else away from this, it will still have been worth it to me.”

According to the Inked website, thousands of models registered for their chance to take home a $25,000 grand prize and be featured on the cover of the tattoo lifestyle magazine.

To vote for a model, individuals with a valid Facebook account may use that account to vote once every 24 hours for free, as well as purchase additional votes for $1 each. A portion of the proceeds will go to the MusiCares Foundation, which helps musicians in health or financial crises.

Voting for the Top 5 runs Feb. 4-11, followed by voting for group winners, which runs from Feb. 11-18. Group winners advance to the quarterfinals; that voting runs Feb. 19-25; semifinals run from Feb. 26-March 4; and finals voting starts March 5 and ends March 11.

To vote for Destiny, or to find out about her standings, visit https://cover.inkedmag.com/2021/destiny-sigford.