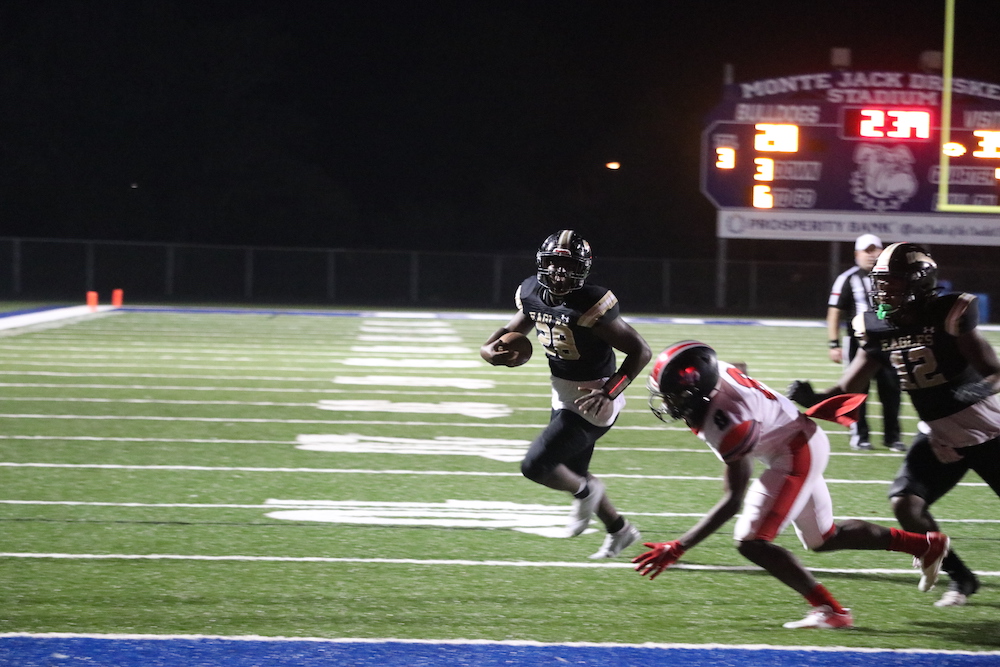 COURTESY PHOTO The Trojans’ season came to an end last Thursday with a 41-28 playoff loss to Woodville.

CROCKETT – Ken Stanley had a hunch that the Coldspring-Oakhurst football team would have its hands full with Woodville last Thursday.

The head coach of the Trojans proved to be right. The Eagles used a balanced offensive attack and took advantage of a handful of Coldspring turnovers as they soared past the Trojans, 41-28, in a Class 3A-Division I bi-district contest at Monte Jack Driskell Stadium in Crockett.

“It was one of those tough nights where once we would get something going, we couldn’t get a stop or something wouldn’t go our way,” Stanley said. “It is what it is. We have to make plays and they made more than we did.”

Coldspring finished the season 8-3. Woodville (8-2) advanced to the area round where it faces Columbus at 7 p.m. Friday at Merrill Green Stadium in Bryan.

Last week’s playoff contest was a role reversal from two years ago albeit with the same end result. In 2018, the Eagles were the champions of District 12-3A-DI and defeated the Trojans, 34-7, in the bi-district round.

Coldspring was the fourth-place team out of 11-3A-DI and operated out of the spread offensively. Woodville ran the double-wing offense in 2018.

This season, the Trojans ran the double-wing and won 9-3A-DI, while the Eagles operate out of the spread and were the No. 4 seed out of 10-3A-DI. However, Woodville was in a three-way tie for second with Anahuac and Buna, but was the No. 4 seed because of a points tiebreaker.

“We knew they were pretty good and we had a pretty good game plan going in, but we didn’t anticipate a three-and-out or fumbling the ball,” Stanley said. “We were doing what we wanted to do, we were running the ball and moving the chains, but when we put the ball on the ground, we had to get in the spread and we were able to get some big plays out of that.”

A three-and-out and a lost fumble on Coldspring’s first two offensive drives led to a pair of Darrius Bean-to-Jaylen Kibble touchdown passes that put the Eagles up 13-0 midway through the first quarter. A second lost fumble on the Trojans’ third drive had Woodville smelling blood and gunning for a bigger lead, but Luke Monroe intercepted a Bean pass in the endzone on the opening play of the second quarter to give Coldspring possession at its own 20-yard line.

The Trojans needed just six plays to get on the scoreboard. Contavious Parker-Harden received a pitch from quarterback Duke Lawniczak, cut to his right and ran through a hole made by the offensive line for a 61-yard touchdown run that cut the Eagles’ lead to 13-7.

But Woodville answered. Bean connected with Jacory Hyder for a touchdown pass and Pop Prejean added the two-point conversion run to increase the Eagles’ lead to 21-7. Coldspring drove to the Woodville 8 as time expired on the first half behind Lawniczak completing passes to Tavaress Chambers and Dante Eldridge.

After blocking a punt on the opening drive of the third quarter, the Trojans set up shop at the Eagles’ 27. Lawniczak connected with Parker-Harden for 18 yards before the senior running back had an 8-yard run to the 1, the drive-capping 1-yard score and the two-point conversion run to trim the Coldspring deficit to 21-15.

The Trojans appeared to have caught a huge break when Bean threw his second interception of the night. But a fumble during the interception return was recovered by Woodville, and the Eagles responded with the first of Prejean’s three touchdown runs to increase their lead to 28-15.

Woodville struck again following a Coldspring interception as Prejean added a second touchdown run to give the Eagles their biggest lead of the night, 35-15, midway through the third quarter. Lawniczak scored on a 27-yard run to trim the Trojans’ deficit to 35-22.

Following a Woodville punt early in the fourth quarter, Lawniczak threw a pass that was deflected twice before being hauled in by Eldridge in the end zone for a 37-yard touchdown that pulled Coldspring within seven, 35-28, with less than nine minutes in the contest. But Prejean took over from there.

The Woodville junior ran the ball 10 times on the 12-play drive, including the drive-capping 7-yard touchdown run. Prejean ran for 138 yards in the second half.

“They kept moving the chains, picking up first downs and scoring,” Stanley said of Woodville. “Tip your hat to them.”

Parker-Harden ran for 155 yards and two touchdowns, while Lawniczak completed six passes for 122 yards and a score, while rushing for a touchdown. Eldridge caught two passes for 54 yards and a touchdown, while Greg Terry ran for 48 yards and caught a 35-yard pass.

“We had 10 seniors and they all played,” Stanley said. “They’re good kids and we’re going to miss them. We hope to get some of them to sign.”

Eldridge, Lawniczak, Parker-Harden and Terry were four of the 10 seniors who suited up on the gridiron for Coldspring for the last time. The others were Bobby Bishop, Joseph Lemon, Matt Martinez, Caleb Monroe, Reagan Roberts and Trevor Vaughn.