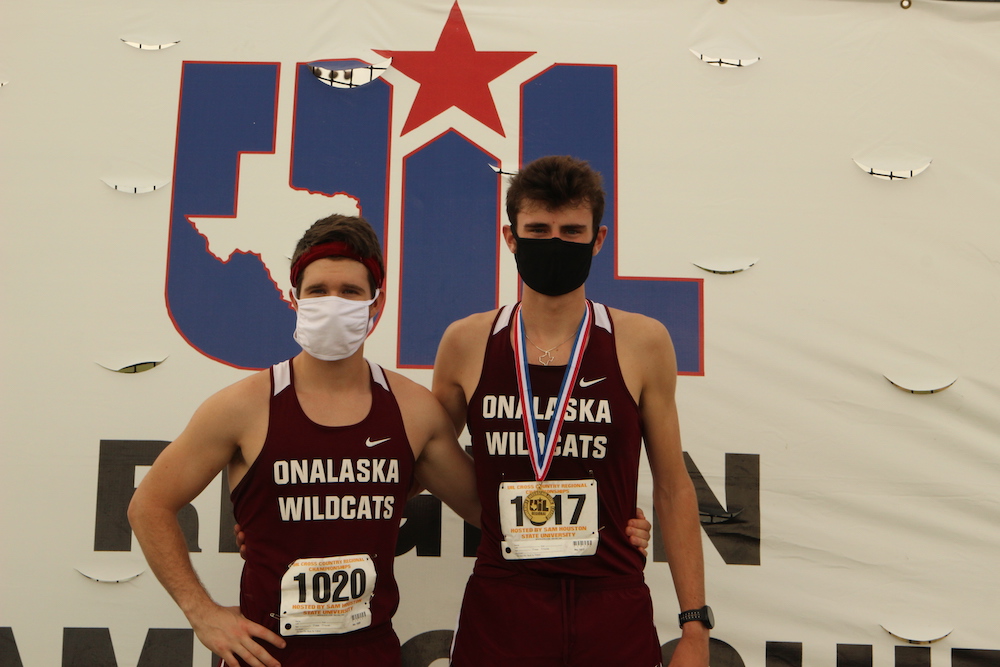 LARRY LAMB I HCC Onalaska seniors Brady Neuman (left) and William Boyce will compete in the Class 3A cross country meet Monday afternoon in Round Rock. Boyce is aiming for the state championship, while Neuman, the front-runner for OHS’s Class of 2021 Valedictorian, is aiming for his personal-best time.

ONALASKA – William Boyce and Brady Neuman have a few things in common.

They’re both members of Onalaska High School’s Class of 2021, the OHS cross country program, OHS track and field program, and OHS FFA, to name a few. Speaking of cross country, both Boyce and Neuman will represent OHS at the state cross country meet Monday afternoon in Round Rock.

Boyce and Neuman each want to be at the top of their field, but this is where things begin to differ. Boyce wants to be the top male runner in Class 3A and has plans on winning Monday’s race, but Neuman wants to be the top student in OHS’s 2021 senior class.

“I’m currently ranked in the top of the class,” Neuman said.

Neuman plans to go to Texas A&M and major in biomedical and become a physician. During district FFA competition on Nov. 12, Neuman and his ag issues team finished first and his public relations team finished second.

Boyce also finished third in job interview at the district FFA competition. Onalaska finished second overall in district FFA, and the top two finishers in each category advanced to the area competition which took place Thursday.

Neuman also won the FFA wildfire competition last month for the third year in a row. He earned a belt buckle and scholarship money.

“This is my second trip to state,” Neuman said. “Last year we went as a team. If we hadn’t qualified as a team, I actually wouldn’t have advanced. I knew I had to run for my life this year if I was going to make it to state.”

The Onalaska boys cross country team won its seventh consecutive district championship in October as well. Boyce and Neuman were the top finishers for the Wildcats in both the region and district meets.

Boyce has one goal in mind Monday afternoon – first place. He is a three-time district champion and two-time region champion individually, and won both titles this year.

“When I look at the Round Rock course, I think of Texas as a whole,” Boyce said. “There’s all sorts of terrain on that course. Each region has different soil textures. With Austin being smack-dab in the middle of Texas, I feel like you have all of Texas in one spot. The course itself has hills, sand, rocks, holes, ditches, everything. It’s definitely an all-terrain course and it represents Texas terrain.”

Boyce plans to attend college on a track and field or cross country scholarship. He wants to become a teacher and coach with plans to enter into administration.

Boyce believes the courses he and his teammates ran on in district (Anderson) and regional (Huntsville) will have him ready for Old Settler’s Park’s course in Round Rock. He also has it in his mind that he will be the first one to cross the finish line.

“I have to have self-motivation and go in there like I know I’m going to win,” Boyce said. “If I go in there thinking I’m going to lose, I’ve already beaten myself. I feel like cross country as a whole is a mindset game. You have to push yourself to your limits.”