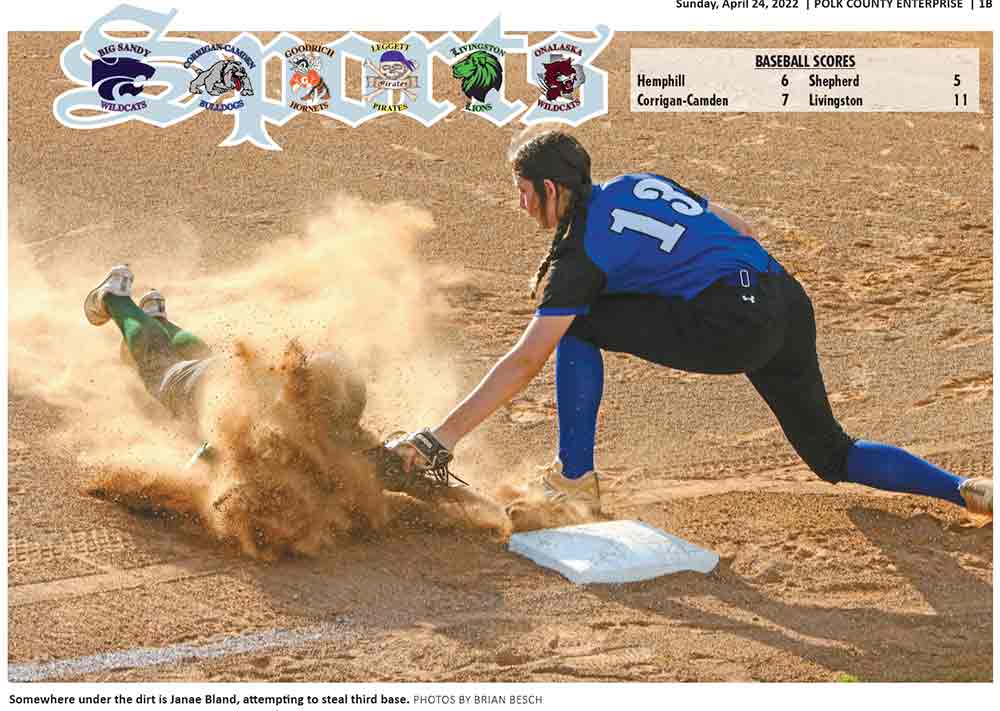 Lady Lion softball waited until the final inning to score, providing a dramatic 2-1 win over Shepherd Friday night in Livingston.

In the bottom of the seventh, Shelby Dickerson tripled when the ball bounced past Lady Pirate outfielders. With one out, Bailey Bass grounded into a fielder’s choice, but an errant throw allowed Dickerson to score and Bass to reach safely and tie the contest at 1-1.

“She’s a freshman and I pulled her up halfway through the season on varsity,” Livingston coach Heather Mosser said of Dickerson, who entered the game in the fifth inning. “She came through in a big way. It’s awesome for her and it is a great look to the future. I was playing her both ways this year because there are some teams we have played that don’t have a J.V. team. The last time we played Shepherd, I think she fielded every ball that was hit to her and she never wavered. She comes in clutch at the plate at times, so the future is bright for her.”

A wild pitch then permitted Bass to third base. Janae Bland hit a pop up to left field, where no one could make a play. Bass scored easily and the Lady Lions celebrated the win.

“I’ve seen these kids play all year. I’ve learned not to give up on them, and I never do,” Mosser said. “It was a little rough at times, but I figured it would fall at some point. It did. We kept playing and we kept our heads up and just kept working.”

Both teams threatened in a few different innings, but only Shepherd could reach home plate until late, doing so once in the third inning. Brooklynn McCumber tripled and Kaylee Barlow brought her in with an RBI-single to make it a 1-0 game.

Allison Lytle started the game in the circle for the Lady Lions and went 4.1 innings, giving up just one run. She struck out four and gave up just three hits. However, she ran into trouble in the top of the fifth. With two runners in scoring position, Jaycee Knighton came on in relief and did not allow a run, keeping the game at 1-0. She was impressive over 2.2 innings, allowing just one Shepherd baserunner on a walk while striking out five.

“Both of my pitchers can throw, it is just up to my defense whether we are going to make a play,” the coach said. “That has been a struggle for us, which is why as soon as we got into a little bit of trouble, I felt like it was time to mae a change. At the same time, our offense has to play too. I really have faith in that, but we are really going to have to buckle down and make sure every aspect of our game is tight moving forward.”

Shepherd hurler Barlow threw 6.1 impressive innings, taking an undeserved loss. She struck out six and walked just one, scattering seven hits. Only one of the two Livingston runs was earned.

The Lady Lions will now prepare for a play-in game versus Hardin-Jefferson at a neutral site to decide the final postseason slot in District 21-4A.

“We split with Hardin-Jefferson on the season and we have the same record right now, so we are tied with them for fourth. Monday, we will play at Splendora at 5:30 p.m. for that fourth seed. We beat them 4-0 in the beginning of the year and then in our second game, they beat us 13-12 in the seventh. I think that we are the better team. Of course, I am always going to say that, but we have to play. We are definitely going to have to play better than we did tonight, for sure.”