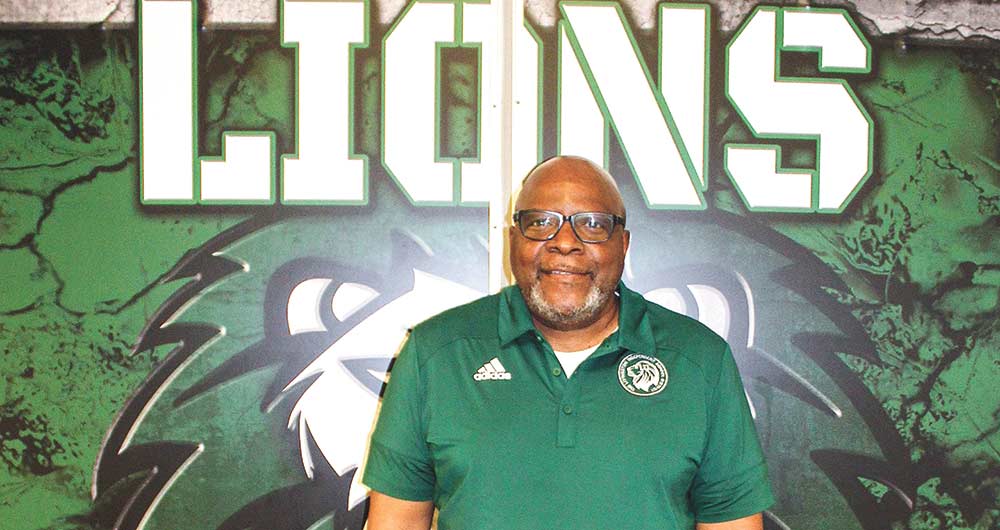 Phillips has already done some homework on his new team over the past week, studying game film from the 2019-20 Lion season.

Livingston - One of the perks of coaching in Texas for decades is the acquaintances, connections and friends made through the profession. Livingston Athletic Director Finis Vanover has once again used those to hire Brazosport High School head coach Calvin Phillips to hold the same position for the Lions.

Earlier in the week, Kohl Neel took the La Porte head coaching job, leaving Livingston with a void. A phone call started the wheels in motion to bring Phillips to Polk County.

“He had a lot to do with it,” Phillips said from DeWalt Field House Thursday. “I have coached with him before at Angleton and got into the playoffs there when he was athletic director. He was a big piece of the puzzle.”

The coach has been at Cleveland, Columbia, Wharton, West Columbia, Stafford, Brazoswood, Angleton, Dickinson and Brazosport since 1978. It was at Angleton, where Vanover was then the athletic director, that the two last coached together.

Thursday, he met a few of the students he will soon coach on the hardwood.

“Today was the first chance to see some of the players. There was only about six there that were varsity players from last year. There is height, but they are small. We have a lot of stuff to do in the next few months, but there are some pieces there. The biggest thing is now trying to get the communication and dialogue with everybody. Everybody needs to get to know each other and see what everybody’s expectations are. I can smile a little bit, knowing that you have something to work with. I’ve never had a lot of height where I have been head coach.”

The new coach said he has spent the past week studying game films from the 2019-20 season. Assistant coaches Stephen Seaback and Robert Rogers are back on the staff to help ease the transition.

“Coach Seaback has sent me some film on Hudl and I have been watching some games. The pieces are there, it will just be the kids buying into my philosophy. Then, I get to see them a few weeks before school starts and hopefully, we can have some communication. It is going to be a challenge, but I’ve been in it for a while, so I know you just need time to make things work. Coach Seaback and coach Rogers have communicated with me about the kids and the liabilities and assets with the kids.”

Phillips said the Lions will open it up and run a lot this season.

“More pressure man (on defense) and I like transition,” the coach said. “I haven’t got a chance to see all the kids, but there are a lot of bigs out there that are 6-foot-6 and 6-foot-7. There is a little skill there. I haven’t seen any guards, but I like man-to-man pressure and try to get out and run a little bit. I can’t really say until you see all the personnel, but I think we might be able to see some things like that.”

In his previous stops, Phillips said his squads have been long-range shooting teams.

Phillips recalls coaching in the area through his first years in Cleveland 1978-80, but does not have many connections to Livingston.

“The only thing I know is Lake Livingston,” he said with a laugh. “I don’t know much about the community or that type of thing, but the days that I’ve been up here, the welcoming party has been pretty good. I’m looking forward to it.”

Getting a late start by joining the school in July should not have the same impact as usual, with most extracurriculars suspended for months.

“Everybody is kind of behind a little bit, but it gives us some extra time. Everybody can sit down as a staff and evaluate some things and what I want to do. I don’t have to rush. We want to make sure that it’s right and that the kids are going to be comfortable with what we’re doing. It kind of throws a little wrinkle in the situation, but just like anything, you have to adjust on the run. That is kind of what we’re going to do.”

The new hire is already out building relationships and preparing to improve upon a program that has reached the playoffs the past couple of years. He is happy to be in the community and looking for support.

“I’m going to try to be as visible as possible with the parents in the program and kind of let them know who I am. I don’t want to just see them when things are going bad. I want to make sure I establish a rapport with them.”