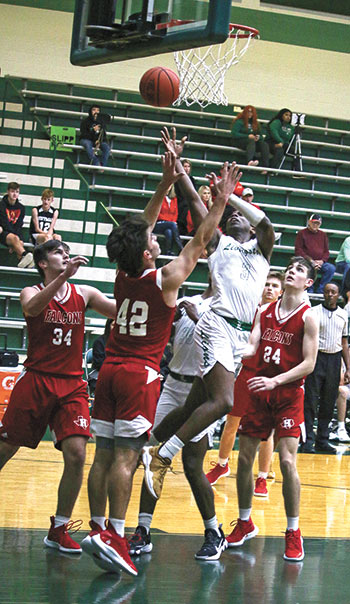 Jacob Byrd shoots in traffic near the basket.By Brian Besch

The game didn’t start as the Lions would have liked, collecting five fouls in the first two minutes after the tip. Yet, they stayed aggressive on defense holding the Falcons to 19 points in the first half. The Lions scored 17 and 16 in the first two quarters, respectively.

“The guys played real well. I don't know what has happened,” Livingston coach Calvin Phillips said. “When we first started off, I

told these guys that we d dn't have the talent level that we had last year. But I told them that they had heart and that if they played with effort, I guaranteed that they would win some ball games. That is what has happened. These guys – the chemistry is there and they are more together. That is what is making a difference.”

The Lions created fast breaks off steals, found the open man under the bucket, and beat defenders off the dribble. Huffman was a flustered team at times that could not get into a consistent offensive rhythm versus the green swarm.

“We are beating people on just basic stuff – boxing out, playing good defense, moving your feet and active hands,” Phillips said. “That is what is getting us in right now. We hit shots, but our shots are coming off of layups and steals. We hit a couple of threes, but it is just being competitive. They are believing in each other and playing well together.”

After playing to a 9-9 draw in the third period, the Lions outscored Huffman 17-15 in the fourth, making it three of four quarters they would do so.

William Dault had 15 points for the Lions in the win, Jonathan McNeal had a dozen and Jayden Randolph had 10. Ridge Thomas led the Falcons

The Lions are now 3-0 in district play, tied with league favorite Hardin-Jefferson. A quick road trip to Shepherd Friday is next on the schedule. Livingston then returns home Tuesday for a match withSplendora.