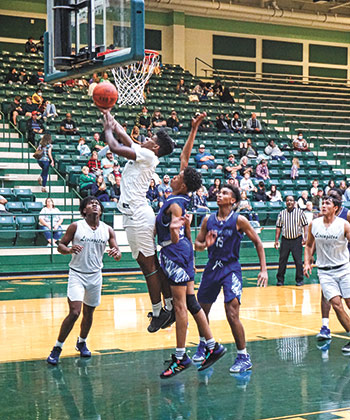 Jayden Randolph gets his shot under the rim.By Brian Besch

Livingston hoops controlled the second half of Friday night’s contest to come away with a convincing 61-38 victory over Aldine in LionGymnasium.

The Mustangs are a bigger school, both in physical stature and enrollment, but Livingston shut the Class 6A team down in the third and fourth quarters, outscoring them a combined 35-7 in the half.

“That is the best that we have played all year,” Livingston coach Calvin Phillips said. “If we had played that way against some other teams, we would be undefeated. Last year, I told you that they were going to be better, because they are going to play more together. That is what they are doing right now.”

It took a few minutes for the home team to match Aldine’s intensity, as the Mustangs came out and took an early lead on four long-distance jumpers. A change from zone to man defense helped the Lions, but they would trail 31-26 going into halftime.

The Lions would go on a 23-2 run from halftime into the early minutes of the fourth quarter, taking the lead for good. Defensive intensity picked up in the second  alf, as well as rebounding on both ends.

“If you come to a practice, you can see the rebounding drills that we do. It is like football,” Phillips said. “We put the dummies out there, and they hit those dummies and box them out. Those drills now are coming into play.”

With a comfortable advantage, the Lions were able to slow the pace and work in a half-court offense effectively. Each player shared the ball, passes were sharp and outside shots began to fall.

“We’ve got to do it and not make mistakes. We also have to find the open man. That is what they did good tonight. I don’t know how many points we got on that, but we had a lot of people open that kept their heads up.”

William Dault led the Lions with 21 points; he had five makes from behind the arc. Jontavian McNeal had 15 points, Jordan Bush had 10, and Julian Gardner added nine.

The coach said some of the athletes coming over from football are starting to develop in the winter sport.

“They play together. They talked to each other on the floor and that makes a lot of difference. We had a good practice yesterday and they were focused. I didn’t know how they were going to come out, but sure enough, it all transitioned into tonight. I’m ecstatic because I justdidn’t expect that type of play. Not against Aldine, because Aldine plays against Beaumont United and other big schools. They’ve got some athletes, but we were scrappy.”

Next week, district play begins, as the Lions will host Liberty on Friday.