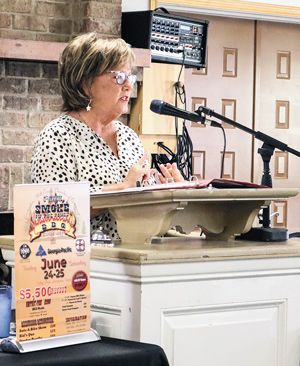 Debbie Mayes speaks at the Livingston-Polk County Chamber of Commerce quarterly membership meeting.By Emily Banks Wooten
This email address is being protected from spambots. You need JavaScript enabled to view it.

Debbie Mayes, executive director of the Polk County Commerce Center, was the guest speaker for the quarterly membership meeting of the Livingston-Polk County Chamber of Commerce Tuesday at the Cho-Yeh Camp & Conference Center.

Thanking the chamber for inviting her to speak about the Polk County Commerce Center, Mayes said she’s been walking those halls for nine years now and that she is the only fulltime employee, but that she is blessed with some “as needed” employees that help her clean and reposition tables and chairs.

“Many people are confused as to who I work for so if you’re one of those people I’d like to explain. The Polk County Commerce Center is a county-owned building, but I do not work for the county. I work for the Polk County Higher Education & Technology Foundation Board of Directors. Those directors are Andy Evans, Garvey Jackson, Judge Sydney Murphy, Shelly Bush Sitton, Connie Slocomb, Dr. Brent Hawkins, Bill Wiggins and Martha Watson,” Mayes said. “This nonprofit foundation was created to assist in providing educational opportunities in Polk County. They’re supportive of Angelina College Polk County Center and the education opportunities they offer.

“Most of these board members have served faithfully for the entire nine years. They are all volunteers and do a great job. The next time you run into one of them, how about giving them a pat on the back for their dedication to serving our community through their volunteer service on this board,” Mayes said.

“Also during the pandemic, the Polk County judicial system used the commerce center seven times for the grand jury, jury selections and one trial. The commerce center was large enough to accommodate the social distancing guidelines that were in place at that time. We were paid through the county for all these events and what a blessing that was. The global pandemic in 2020 was devastating to the Polk County Commerce Center. When you’re an event center and nobody can have events, you suffer financially. There were more than 25 events cancelled in 2020,” Mayes said.

“My board was able to take advantage of a government loan that offered a low interest rate and a long-term payment plan to help us navigate through the crisis. Things really began to look up in 2021. I worked 49 events in 2021, and so far in 2022, I’ve worked or booked 45 events and have seven events booked for 2023,” Mayes said.

“We host a variety of events–gun shows, spa shows, weddings, quinceaneras, proms, graduations, Christmas parties and all manner of celebrations. First Baptist Church held their Easter service at the Polk County Commerce Center last year. We were honored to serve the Alabama-Coushatta Tribe of Texas in being the venue for the funeral of their chief, Herbert Johnson, last August. The Polk County Commerce Center hosts a variety of organizations’ fundraisers and serve many businesses during the Christmas season for their company parties,” Mayes said.

“With our ability to seat 1,200 concert-style, we’ve offered several Grammy Award-winning country artists, such as Ricky Skaggs, Marty Stuart, Asleep at the Wheel, Neal McCoy and through a private donor, Mickey Gilley. This October 8 through the generous donation of The Smith Family Foundation and Robert Smith, we’re bringing Grammy Award-winner Marty Stuart back. This is a Polk County Commerce Center fundraiser sponsored by The Smith Family Foundation,” Mayes said.

“People are hungry for live entertainment and hopefully they’ll come out and enjoy the beautiful music of Marty Stuart and help support their local community center. In the past, 90% of the people attending these concerts were out-of-towners which is great, because it’s a great promoter of tourism to our wonderful city and county. But if the local community would support these concerts as well, we’d have a full house and an even more financially successful fundraiser,” Mayes said.

“We’re thrilled that the Livingston Community Concert Association has selected the commerce center as their venue for all their concerts. I visited with a group that plans to hold a Comic-Con at the commerce center in the fall of 2023. It’s interesting work in that I meet so many people, with dreams of lots of interesting events. One of the people attending the Neal McCoy concert is a famous supporting actor and his name is Glen Morshower. He’s famous for his acting in “The Resident,” “Bloodline,” “Transformers: Dark of the Moon” and “Blackhawk Down.” He was there to meet Neal McCoy simply because he was a fan. I met a famous entertainer from Switzerland at the Marty Stuart concert. He had flown into Houston and driven up because it was his birthday and he wanted to spend it at a Marty Stuart concert,” Mayes said.

“Also at the Marty Stuart concert I met Reid Gettys, a member of the Houston Cougars basketball team during the Phi Slama Jama days from 1982-1984. They were famous for slam dunking and their explosive fast breaking style of play. Hakeem Olajuwon and Clyde Drexler were also a part of that team. Reid Gettys has a home on Lake Livingston and his wife is a huge Marty Stuart fan. He’ll be back in October and if you’re there, you won’t have any trouble spotting him. He’ll be the tallest man in the room,” Mayes said.

“Back to interesting people that I’ve met while working at the commerce center—one of the nicest people I ever met was Bob Phillips, the Texas Country Reporter. He had so many good stories. He’s a good listener and was very interested in our city and county. He asked lots of good questions. We had such fun hosting an event for locals to watch Laci Kaye Booth live during one of the final episodes of American Idol. There were lots of folks there to support and vote for one of our own,” Mayes said.

“I don’t know what we did before the Polk County Commerce Center was built. There was no place for large groups to gather. We all need to support our local community center because a lot of community is supported there. If you have an upcoming event and don’t know where to have it, give me a call. Call me and let me help you with customized pricing for your special event. It’s a great job and a privilege to serve my community there. See you at the next event,” Mayes said.

“We appreciate you being here today and we want you to know that we are here for you. Call us for anything. There’s no question you can ask that we haven’t heard before. Please call anytime,” Chamber CEO Yvonne King said, reminding everyone that the chamber’s mission statement is “… to enhance the success of business, tourism and civic interests of Polk County and to promote the quality of life for all citizens.”

Ambassador President David Burns apprised everyone of several upcoming events. These include ribbon cuttings at Coats Livingston Jewelers at 11 a.m. on Friday, at First Community Financial Group at 1:30 p.m. on April 20 and at Today’s Dental at 11 a.m. on April 22.

He reminded everyone of the 3rd annual Smoke in the Pines barbecue cookoff, auto and bike show and kids cookoff June 25 at Pedigo Park. The next Power Hour with the Chamber is slated for 8-9 a.m. April 5 at The Bull Shack. The next learning luncheon is slated for April 19 and Jody Morse of Livingston Fitness Center will be the speaker. The next quarterly membership luncheon is June 28 and Courtney Comstock with the Polk County Office of Emergency Management will be the guest speaker.