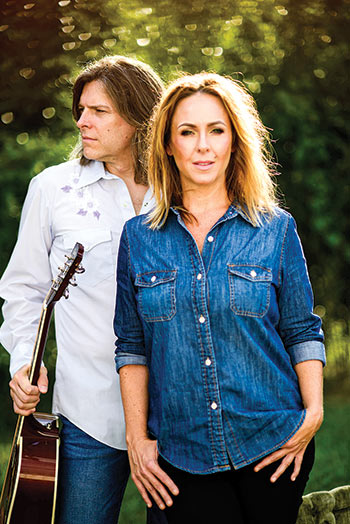 Livingston Community Concerts will present Seals & Crofts 2, where members will experience the music of 70’s rock duo Seals and Crofts in a whole new way. The concert is slated for 7:30 p.m. Monday at the Polk County Commerce Center, located at 1017 U.S. 59 Loop North in Livingston.

Memberships in the Livingston Community Concert Association may be purchased for as little as $50 per person and family rates are also available. Membership will allow one to attend all concerts per season.

For additional information go to www.livingstoncommunityconcert.org or contact Sally Frasier at 936-967-0219.

Community Concert members will enjoy the hits “Summer Breeze,” “Diamond Girl,” and “We May Never Pass This Way (Again),” as Seals and Crofts 2 recreate those hits “artfully re-imagined with a reverent nod to the past.” Seals & Crofts 2 consists of Brady Seals, a cousin to James “Jim” Seals, and Lua Crofts, the daughter of Darrell “Dash” Crofts.

Brady Seals is related to multiple music industry icons including Jimmy Seals of Seals and Crofts and Dan Seals of England Dan & John Ford Coley. Over the course of his career, Brady has sold over 11 million albums and is probably best known for his tenure in the 1990s as keyboardist and co-lead singer in the Grammy-nominated group Little Texas. He co-wrote three consecutive number one songs for the band “What Might Have Been,” “God Blessed Texas,” and “My Love,” winning him ASCAP’s Triple Play award.

Seals pursued a solo career in 1996, collaborating with Rodney Crowell to co-produce his Warner Brothers album, The Truth. That album featured a duet with Wynonna Judd. A self-titled CD followed in 1998 with guest appearances by Vince Gill, Ricky Skaggs, Timothy B. Schmidt of Eagles fame, Bela Fleck and Max Carl from .38 Special.

Seals returned to his band roots and formed Hot Apple Pie in 2002. The band quickly made history when they became the highest-selling debut country group in the Neilson

Vocalist Lua Crofts has roots with 70s rock legends. She is the daughter of Dash Crofts of the 1970s duo Seals & Crofts. Hailing from Los Angeles, center of the rock industry, by age 7 she accompanied both her parents on a song which would later be featured on a children’s album. She became “… an in-demand session singer throughout the 90s and early 2000s in the Los Angeles area, singing background vocals on many popular R&B albums for artists …” She toured with Brady Seals for his ’97 solo album tour, “The Truth” and during that tour, Lua and Brady began working together musically.

She currently resides in Nashville Tennessee with her husband and children. She continues to do studio session work and both sings and tours with the popular Nashville Gospel Choir, Eric Dozier and Friends.