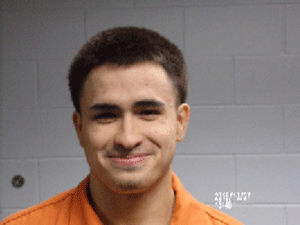 A sentencing hearing was held June 3 in the 258h Judicial District before the Honorable Judge Travis E. Kitchens Jr. for Eli Binnion, 22, of Livingston in Cause Nos. 26,265, sexual assault of a child, and 26,266, aggravated assault causing serious bodily injury. Binnion pleaded guilty to the offenses on March 14, 2019, and has been in the Polk County Jail since that time.

The sexual assault of a child offense allegedly occurred on July 2, 2018, at the Hampton Inn in the 200 block of Commerce Lane. Binnion was 19 at the time and the alleged victim was 14. The aggravated assault causing serious bodily injury stems from an incident that occurred on September 2, 2018, while Binnion was incarcerated in the Polk County Jail in which he allegedly punched a jailer more than once with a clenched fist and fractured his jaw.

On the charge of sexual assault of a child, Binnion was placed on deferred adjudication probation for 10 years with multiple conditions, including serving an additional 180 days in the Polk County Jail and registering as a sex offender. As for the charge of aggravated assault causing serious bodily injury, Binnion received a sentence of three years confinement in the Institutional Division of the Texas Department of Criminal Justice. Having already served 991 days in the Polk County Jail pending disposition of the case, this sentence will be completed in approximately three months.

According to a press release from Polk County Criminal District Attorney William Lee Hon, the State, through Assistant District Attorney Rachel Ellsworth, stated its opposition to the Court’s decision to place the defendant on deferred adjudication probation.

Recent national publicity about the sentencing has resulted in numerous death threats for Kitchens, his family and staff, as well as a multitude of threatening emails being received by his staff.

“There have been some threats, blind threats I’ll call them, sent to the county’s webpage,” Polk County Sheriff Byron Lyons said. “We’ve made our security staff aware of what’s going on, as well as the clerks’ offices and others who work closely with the judge and his staff.”

According to Michael L. Davis, Binnion’s defense attorney, the State, in writing, waived its right to a jury trial in the case at the time Binnion pleaded guilty in March of 2019.

“This is significant because if the State had truly wished to prevent Mr. Binnion from receiving deferred adjudication, the State could have legally barred such an option by refusing to waive their right to a jury trial,” Davis said.

“On June 3, 2021 Judge Travis Kitchens presided over the sentencing hearing, where the State was legally entitled to call any number of witnesses, including the victim or the victim’s family, that the State wanted Judge Kitchens to consider in rendering a sentence. Probation Officer Mary Beth Barker was the only witness that the State elected to call to testify for Mr. Binnion’s sentencing,” Davis said.

“Ms. Barker, the State’s only witness, made recommendations to the Court regarding terms and conditions of deferred adjudication. Polk County District Attorney Lee Hon was present at the hearing and, as reflected in the transcripts, at no time prior to the judge pronouncing his ruling did the State ever recommend prison time, for 15 years or any other number, or oppose adjudication. Only after the ruling was final did Assistant District Attorney Rachel Ellsworth state for the record that the State was opposed to deferred adjudication,” Davis said.

“Ms. Ellsworth further advised the victim’s family was notified of the hearing and did not wish to participate. First Assistant District Attorney Beverly Armstrong stated to the Court that the victim and family were no longer responding to their office,” Davis said, adding, “No judge could ever legally bar a victim from being heard at a sentencing hearing and any suggestion that such occurred in this case is unequivocally false. The State and the Defense were given the opportunity to present any witnesses they deemed appropriate.”

“While Judge Kitchens has only been elected since 2019, District Attorney Lee Hon and his office have handled cases such as this since 2007. Since 2016 alone, some very brief research confirms at least 19 cases wherein a defendant charged with a sex-related offense received deferred adjudication from different judges over the years, including former Judge Kaycee Jones and former Judge Ernie McClendon. The Polk County District Attorney’s Office, led by Lee Hon, was at the helm of them all. In at least 17 of those cases, the Polk County District Attorney recommended deferred adjudication probation to the Court as the desired sentence,” Davis said.

“I make this point to say, in sum, that the sentence assessed Mr. Binnion is by no means a light sentence and should not be construed as such. In addition, it has been my experience that in these types of cases, deferred adjudication is not uncommon, particularly when one considers the emotional toll that a public trial will have on any victim and especially, young and minor victims,” Davis said.

“Mr. Binnion’s movements, decisions and activities will be supervised and scrutinized closely by the judicial system for the next 10 years. Put another way – Mr. Binnion’s supervision will not end until he is 32 years old. His probation in this case cannot be shortened for any reason and there are many terms and conditions recommended by probation, and ordered by Judge Kitchens, with which he must comply for the next 10 years,” Davis said.

Some, but not all of those conditions include:

“Any misstep or mistake by Mr. Binnion on the terms of probation can result in his arrest and being brought back to Court for a hearing by a judge – not a jury – for a potential prison sentence of up to 20 years,” Davis said.