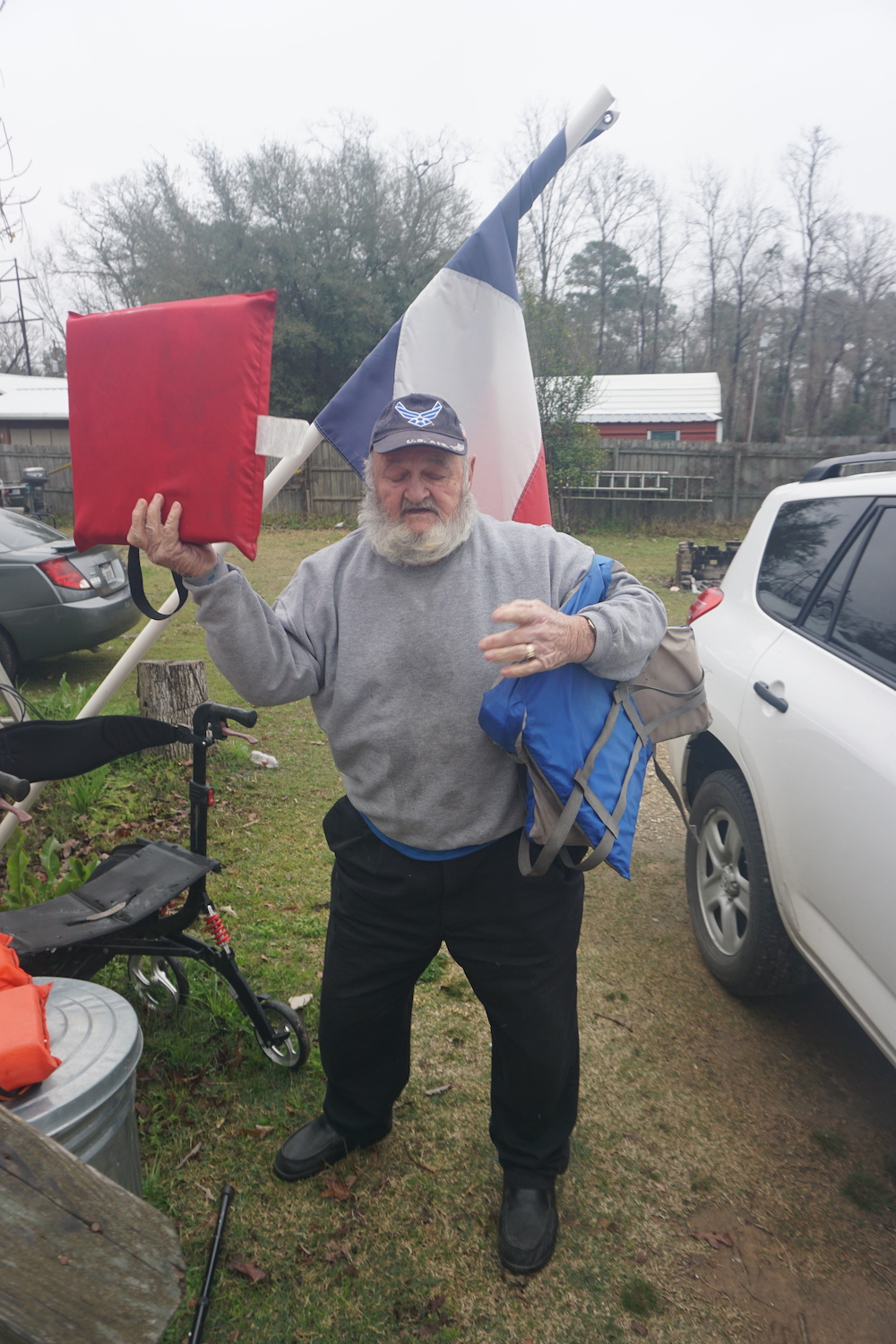 JASON CHLAPEK I PCE Jim Sides poses with the throw cushion and life vest that saved his life when his boat capsized on Feb. 3 while he was fishing on Lake Livingston.

On Feb. 3, Sides went fishing just as he did numerous times during his 78 years of life. But on this day, Sides’ fishing trip in Lake Livingston could’ve been his last.

The boat that Sides was fishing in three weeks ago sank, which forced him to grab the throw cushion and the life vest that were in it. More than three hours later, someone came to Sides’ rescue.

“I was in a horrible situation,” Sides said. “After having someone help me put the boat in the water, I went over to fish. I fished for about an hour or an hour-and-a-half then I noticed there was some water by my foot. I didn’t think much of it, but then I noticed there was more water. Then I started to wonder what was going on. I looked back and I had about a pencil stream of water coming into the boat from right underneath the motor.”

As it turns out, a bolt had been taken out of the boat and the hole wasn’t plugged. Sides purchased the boat a month earlier.

“I just bought this boat and I couldn’t get the motor to run,” he said. “I finally got the motor to running (on Feb. 3). The previous owner guaranteed me that there were no leaks and I took him at his word. I fished all my life and I had water get in the boat. I start the boat, pull the plug out, water runs out and I take off.”

But something different happened when Sides followed the start-boat protocol.

“I started the boat up and I took off, but all of the water came to the back of the boat,” he said. “Then the boat came down. I attempted to put on a life preserver, but I couldn’t get it to fasten around me. I was able to get my left arm through it and get it around my neck. I grabbed my throw cushion and got out of the boat as it was going down. I did not want to go down with the boat. Whenever I would hang on to the sides of the boat, it would sink. I worked my way to the front of the boat, but there were no other boats in the lake.”

Being 300 yards from either the Trinity County or Polk County shores of the lake, Sides was in the water for more than three hours. That’s when his Air Force training kicked in.

“I trained in the Arctic Circle when I was in the Air Force and I learned there not to do too much so I wouldn’t cramp,” Sides said. “I started hollering and waving my throw cushion.”

But there were no boats or people around. Sides started to prepare for the worst.

“I was getting blown up the lake because of the wind current,” he said. “I looked at my watch and noticed that I was about to get dark. I thought I was going to die. I asked the Lord not to take me, but then I saw a boat coming.”

Sides then picked up his throw cushion and waved it as the boat approached. As it turns out, the boat was coming for him.

“The man in the boat, Derek Rosenthal, had been contacted by another man, Bill Sory, who heard me screaming when he took his dog outside to use the bathroom,” Sides said. “Bill called everybody he knew who had a boat.”

Once the boat arrived, the obstacle was getting Sides in the boat. As exhaustion took over, the Air Force Veteran was unable to get into the boat by himself.

“Rosenthal threw a rope around me and pulled me around his pontoon boat. The boat had a ladder and I was able to get my knees on the ladder and Rosenthal pulled me up until I could reach the handrails then he pulled me belly-first onto his boat. I couldn’t stand up because my legs gave out and I was exhausted. Rosenthal then tied a rope onto my boat and took it back around his boat.”

Sides said if it had been another 30 minutes, he would’ve been dead. He’s very grateful for Rosenthal and Sory.

“If Bill Sory hadn’t taken his dog out to use the bathroom, I wouldn’t be here because there was no way I could’ve stayed alive,” Sides said. “I almost froze to death. I don’t know how it didn’t kill me. That water was cold. I had hypothermia. I wasn’t going to drown, but hypothermia would’ve killed me.”

Once Rosenthal and Sides reached the shore, there were two more people waiting for Sides with blankets. Despite pleas from the people who saved him, Sides refused to go to the hospital.

“I was shaking horribly and they begged me to go to the hospital,” he said. “But I wanted to go home. My car was parked by the boat ramp and Bill helped me get in his truck. The seat had a warmer and it felt so good. I talked him into taking me to my car and he followed me home and helped me get in the house.”

Once Sides returned home, he thought he was going to “scare the devil” out of his wife. While he didn’t say whether or not he actually did scare her, Sides was helped into the shower.

“When Bill helped me get in the house, I went straight to the shower and my wife turned the hot water on,” he said. “I sat there for a half-hour letting the hot water run on me. I found out later that there were two helicopters looking for me. You can’t imagine what it’s like being in that water. I knew I wasn’t going to drown and I’m a good swimmer, but hypothermia was kicking my butt. I was completely exhausted and I couldn’t get warm. I thank the Lord that he let me survive one more time. I’ve had a lot of missed calls in my life.”

Sides also said it’s going to be a while until he goes back on the lake.

“I’m not going back in the water until it gets warmer,” he said. “When I do go, I’ll make sure I have my life preserver on.”

He’ll be ready to go fishing then.