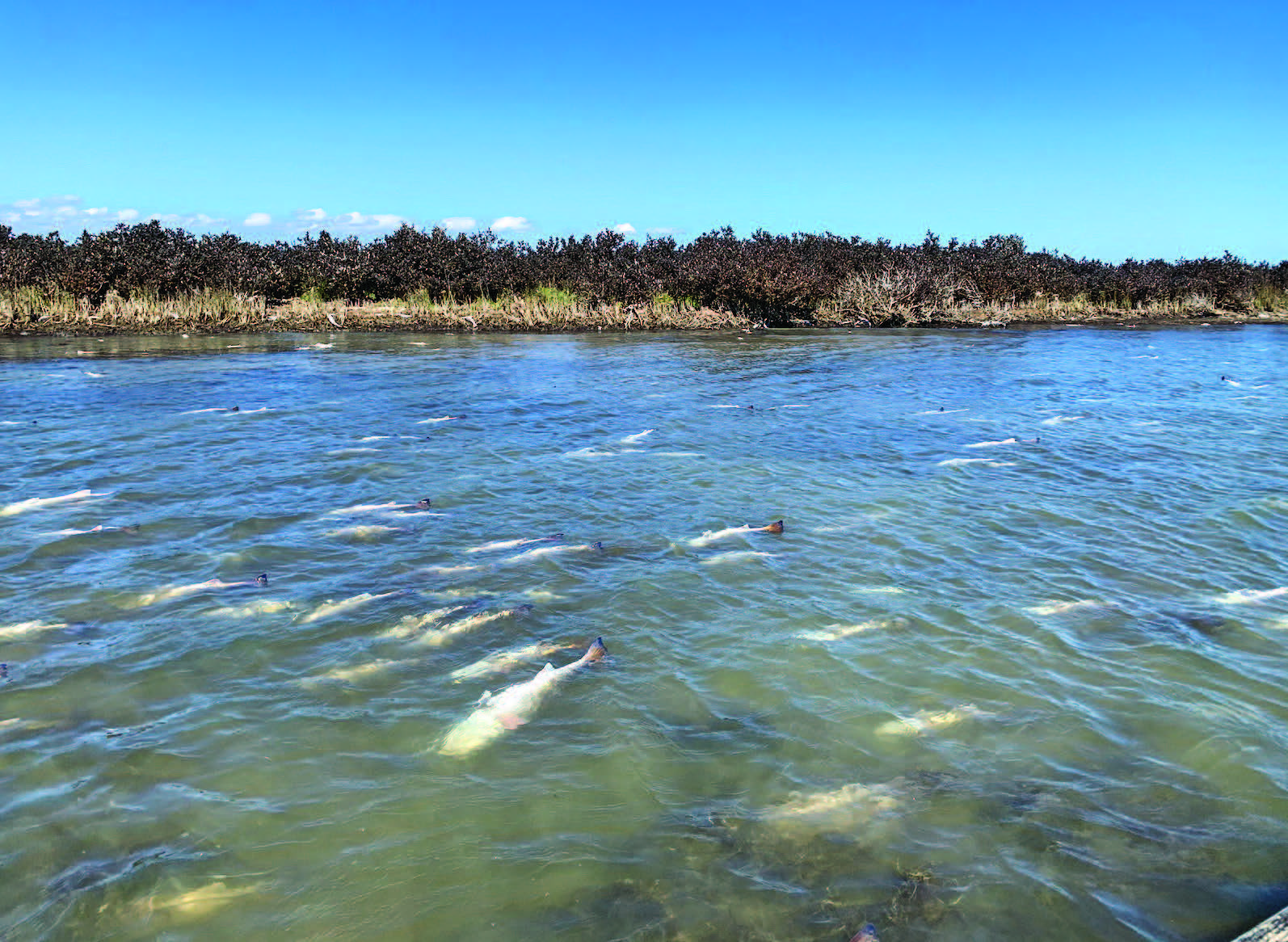 The polar vortex that pummeled the south in February with snow, ice and record low temperatures caught lots of people off guard and wreaked havoc on life as we know it. Many who lived through Winter Storm Uri will forever remember it as a chaotic week when Texas froze over and all sorts of trouble came in the wake.

The state’s power grid choked, leaving millions to fend off the ruthless cold in the dark without heat for days.
Limbs snapped and trees toppled, taking power lines with them. Pipes burst, flooding countless homes and businesses. Roofs collapsed and ceilings caved in. Lakes and ponds froze over.

At Lake O’ The Pines and Toledo Bend reservoirs, sections of two popular marinas sank under the weight of ice and snow.
Excessive demands for gasoline caused long lines at pumps.

Grocery store shelves were stripped bare and many fast food hubs ran short of meat for tacos and buns for burgers.
For many, finding clean water to drink and warm water to bathe became a challenge.

To make matters worse, all of this hardship and more fell on top of a lingering pandemic that refuses to go away.
Texas’ fisheries, wildlife and habitat took some hits in the winter storm, too. It’s still too early in the game to know the full extent of the damage done in the outdoor world, but some of the early reports indicate it isn’t pretty.

A panel of Texas Parks and Wildlife Department experts offered some thoughts on the situation thus far:

White-tailed deer program leader Alan Cain doesn’t foresee any significant losses with white-tailed deer with the exception of a few older animals.
“Obviously, some mortality of the very old deer or those deer in poor body condition is to be expected — this is just nature, survival of the fittest,” Cain said.

Cain pointed to possible damage to native habitat in some regions as a more pressing concern. He said some brush species in South Texas that had green leaves before the freeze are now parched or brown.

“We’re also seeing some impact on the winter weeds which are critical for deer this time of year and into the early spring,” he said. “There are still some green patches of burclover, but we’re also seeing lots of it burned from the freeze. I’m hopeful the moisture from the snow and ice soaked up in the soil we’ll see a good start to the spring green up as temperatures warm.”

Exotic animals didn’t fare near as well in the winter blast. Axis deer and black buck antelope were among the hardest hit. “Many of the exotics don’t do well with extended periods of extreme cold,” Cain said. “I’ve heard reports of axis deer seeking shelter in barns on some ranches in the Hill Country, which is completely unexpected. This just shows how desperate some of the axis deer were to find shelter from the weather. I suspect it will be several weeks before we know the full impact on the exotics.”

Sadly, widespread fish kills occurred along the Texas Coast when frigid air chilled water temperatures into the mid-40s in shallow bay systems. Reports of dead fish and cold-stunned sea turtles began coming in as early as Valentine’s Day. Quantification of the impacts are still ongoing, according to a Feb. 23 TPWD news release.

Biologists and game wardens have documented mortalities along the entire coastline, but TPWD says it appears that bays south of Galveston were the hardest hit. Early assessments indicate the majority of fish impacted were non-recreational species, but game fish including spotted sea trout, red drum, sheepshead, grey snapper, snook, black drum and tarpon were also impacted. Experts will know more as gill net sampling and angler creel surveys get underway this spring. Freshwater sport fish aren’t near as susceptible to mortality in freeze events because they can usually find refuge in deeper water. However, shad populations that provide vital forage for game fish aren’t always so lucky, according to TPWD fisheries biologist Brian Van Zee of Waco.
Van Zee said threadfin shad die-offs have been reported at lakes Texoma, Lavon and Graham.

“It’s not that uncommon, especially at Lake Texoma,” he said. “Luckily, shad populations rebuild quickly. Once it warms up they’ll starting spawning like crazy.” Van Zee added the game wardens at Lake Falcon in South Texas scooped up numerous tilapia that perished in the cold.

Wild turkeys are big, hardy birds. Likewise, TPWD wild turkey program leader Jason Hardin isn’t expecting to see any major impacts from the big freeze.
“Most of our turkeys should be fine,” he said. “They should have had enough fat and energy reserves to survive. That said, any birds that were in bad shape (malnourished, injured, or sick) going into this event would have a harder time and would be more susceptible to predators. This undoubtedly depleted fat reserves, so there could be an impact going into the nesting season with reduced reproductive effort, but if we can stay warm and green from now until spring they should have a chance to replenish their reserves.”

Texas bobwhites just can’t catch a break. The verdict is still out as to how hard the iconic game birds may have been hit by the cold blast, according to Robert Perez, upland game bird program leader.

“Our Texas quail species do have adaptations to get through tough weather,” he said. “With the right escape cover available, the covey formation does an excellent job of heat retention. However, the snowfall seems to penetrate even good escape cover, so coveys may have been pushed and possibly weakened.”

Perez added that icing events lasting beyond 3-4 days can spell trouble for the dapper game birds. “Bobwhite and scaled quail are only weak scratchers, so they are not really adapted to having to dig through ice,” he said. “Once the body fat reserve is gone birds have been found whole/frozen after prolonged ice periods in the Texas Panhandle and Oklahoma. I have not gotten any reports of that so far with this winter storm, but it is possible.”

TPWD’s webless migratory program leader Owen Fitzsimmons said there have been reports of mortalities among white-winged doves, pelagic offshore species and various songbirds, but he isn’t expecting the impacts to be significant. He believes any dove losses will be quickly offset with a decent breeding season.

“Birds need to consume a lot of food to generate heat and stay warm in sustained cold weather,” he said. “It only takes a day or two without food to kill a bird in extremely cold temperatures. The bad part was that all the snow and ice made finding seeds/insects impossible, so that’s why some birds didn’t make it.”

The big freeze may have helped in the state’s ongoing battle against giant salvinia. The invasive plant is present in more than two dozen Texas reservoirs and several rivers, according to John Findiesen, TPWD’s aquatic habitat enhancement team leader.

“I’m not completely sure what the long-term impacts will be, but short term looks good,” he said. “We had a cold weather event in January 2018 that was was not as severe as this one and had a shorter duration, but it still wiped out 98 percent of the salvinia in the state. Giant salvinia covered nearly 6,000 acres of Caddo Lake prior to the 2018 event. We found less than 50 acres of salvinia in our initial post-event survey in 2018.”

Unfortunately, the plant has knack for bouncing back. “This event will definitely help reduce salvinia coverage again, but I don’t know how long it will be before we see it floating again on area lakes,” Findiesen said. “Even if it all dies in Texas, it could easily be brought from somewhere else by trailer, boat or other equipment.”