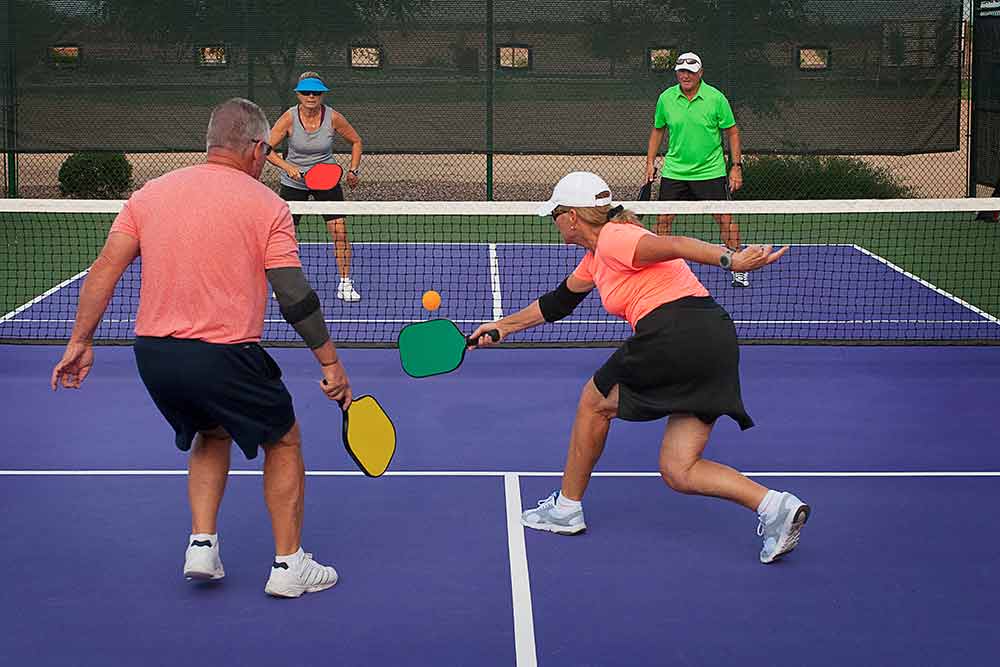 According to Britannica Online, pickleball was invented in the summer of 1965 by a group of neighbors on Bainbridge Island in Washington State. The story goes that the group wanted to play a game of badminton, but they lacked a complete set of equipment. They brainstormed and came up with their own game that combined ping-pong paddles, a whiffle ball, and an old badminton net lowered to the height of a tennis net.

Some accounts claim that the name ‘pickleball’ was inspired by ‘pickle boat’ – a rowing game where boating crews trade members and race together for fun at the end of a competition, a sort of ‘fruit basket turnover,’ if you will. Others say the sport took its name from a neighbor’s dog, Pickles.

But no matter where the name came from, pickleball has suddenly become the fastest-growing sport in America over the past four years, with nearly five million people playing the game.

Pickleball is now included in many school physical education classes. And one of the International Federation of Pickleball (IFP) goals is to see it recognized as a sport in the Olympic Games. Several major pickleball tournaments are held annually. Top competitions in the United States include the USA Pickleball National Championships and the U.S. Open Pickleball Championships. The IFP’s premier event is the Bainbridge Cup tournament, named for the birthplace of the sport, and in 2022, pickleball was adopted as the official sport of Washington State.

Most players of the game say that pickleball can be learned relatively quickly, and fans say that it’s perfect for young and old alike. Unlike tennis, pickleball doesn’t really require any special equipment or clothing, and these days pickleball courts can be found at most public parks. And here are several fun facts - 33% of the core players are over 65 years of age, and around 1.2 million pickleball players are college graduates. Seattle, Washington, has three courts for every 20,000 residents, but Naples, Florida, is called the Capital of Pickleball.

While the popularity of pickleball has exploded in the last few years, it still has a long way to go to compete with other sports like tennis. But based on its current growth rate and projections, pickleball is destined to increase in popularity. And maybe someday, just like the unlikely game of ‘curling,’ the IFP’s dream will be fulfilled, and pickleball will become an Olympic sport.