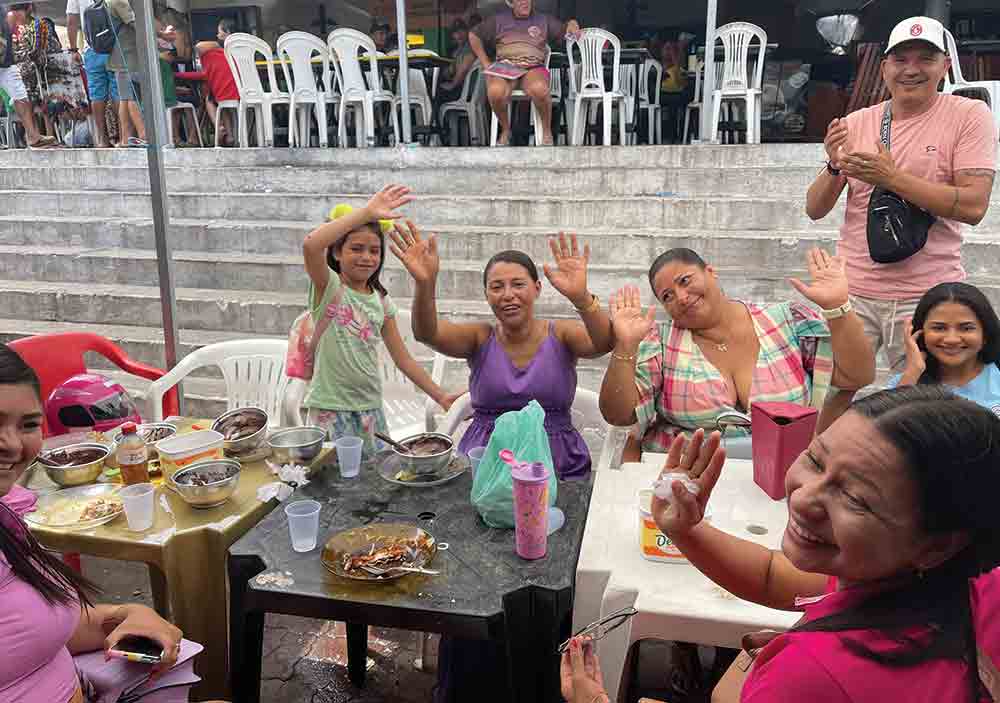 An example of some festive, hospitable locals in South America. All photos by Maureen Peltier

Returning from a recent cruise around the shimmering coast of Brazil, I have been reminded of the value and benefit of observation - just seeing.

Over a period of two weeks, we cruised the mostly calm deep blue waters of the Atlantic Ocean during peaceful days at sea and embarked on various excursions to the islands of French Guiana, the mouth of the Amazon, and three different coastal cities, concluding the trip in the gorgeous Rio de Janeiro.

For many years I have daily filled the pages of many a journal with words; on this trip, I filled a journal, though not with words.

The reason this journal was not filled with sentences and paragraphs that spilled out of my early morning brain; I can attribute to a course in nature journaling I took with Doretta Remy at her Lair across from the courthouse.  Nature journaling is all about observation. Charles Darwin, as well as Meriwether Lewis and William Clark, are the quintessential journalists of nature we all know. Their copious notes were inscribed on thick, rough paper bound in rougher cowhide; daily they scribbled down where they went and what they were seeing.  Today we call that “metadata” and, metadata, plus the addition of the author’s drawings and sketches, is an important part of the pages that fill a good nature journal.

I kept metadata on my travels, too. The metadata of early explorers was nothing compared to mine, not that I was that great.  With the flick of a wrist and a few clicks on my phone, on most days on this trip, I had access to real time data - date, time, location (longitude, latitude, elevation), and atmospheric and oceanic conditions (cloud cover, wind direction and speed, plus temperature). Thank you, Weatherbug and other apps.

French Guiana was the first stop. We anchored off the coast to visit Devil’s Island, the place where as recently as 1957 French prisoners were sent to languish and die.

Onshore, one of the first things that caught my eye was a bright yellow flash in the heavy forest near the old dirty dark brick ruins of one of the prisons. A beautiful Tropical Kingbird.  l made notes - latitude 5.29 degrees North.  Longitude 53.1 West.  12:29 p.m. with the temperature about 82 degrees Fahrenheit.  It was a clear bright day with a slight breeze.  That pretty bird was about 9 inches tall with a wingspan of 14.5 inches.   It only weighed between 1 and 1 ½ ounces.  I won’t bore you with the scientific name, classification, genus or family. (I later caught sight of a cute little Capuchin monkey but decided it would be too hard to sketch, so he didn’t get memorialized.)

Latitude and longitude had never meant much to me before I got back to the ship and started the first page in my nature journal and sketch of the Tropical Kingbird.  I had been a good student and I knew that I needed to record that metadata!  Wow! We were getting and closer to the equator – so that’s what those “latitude” numbers meant. They were real.

We crossed the Equator later that day as we made our way further south.

It’s a big deal to cross the Equator on a ship for the first time; consequently, the ship’s crew had an entertaining ceremony to mark the occasion.  Guests who wished to participate were invited by the tall white bearded King of the Norse to take a bracing plunge into an icy pool and swig some very strong alcohol, all to the sound of loud music, beating drums and clapping by the spectators.

We next headed south to Belim, the first European city on the Amazon, at latitude 1.4563 South. The Amazon basin covers about 35 percent of South America and it doesn’t trickle into the Atlantic Ocean.  It surges past Belim and turns the pretty blue Atlantic for miles out from the coast to muddy looking fresh water.  From the balcony of our room on the ship I observed a long line of skyscrapers, home to over a million and a half residents.   The distant skyscrapers and the brown water of the coast were my journal sketch for that day. Ninety degrees Fahrenheit and altitude 10 meters, etc.

Days at sea and in harbors always brought some new and not so new birds, like the huge Magnificent Frigatebird, the Masked Booby and little silver Flying Fish. The Frigatebird soars so high and is so big!  Its wingspan is over 6 feet.  The Masked Booby is a beautiful black and white seabird. The black feathery “mask” around its eyes actually acts like sunglasses to protect its eyes because it stays at sea in the bright sun for a good part of its life.  From our room, any time day or night, we often saw the Flying Fish, using their special fins to gracefully leap out of the water to avoid bigger predators under the water.  Unfortunately for the poor Flying Fish, they often become a meal for those big pesty birds up above them in the air.  Worse than that, they become an aquatic pawn when a Booby nabs one in its beak and the bigger Frigatebird swoops in from above to steal the Flying Fish from the Booby.

Keeping a nature journal certainly raised my awareness of everything.  Likewise, being in the southern hemisphere brought up unique feelings, as did the sights and sounds of Rio and observations of people along the way.

Stay tuned for the next chapter.