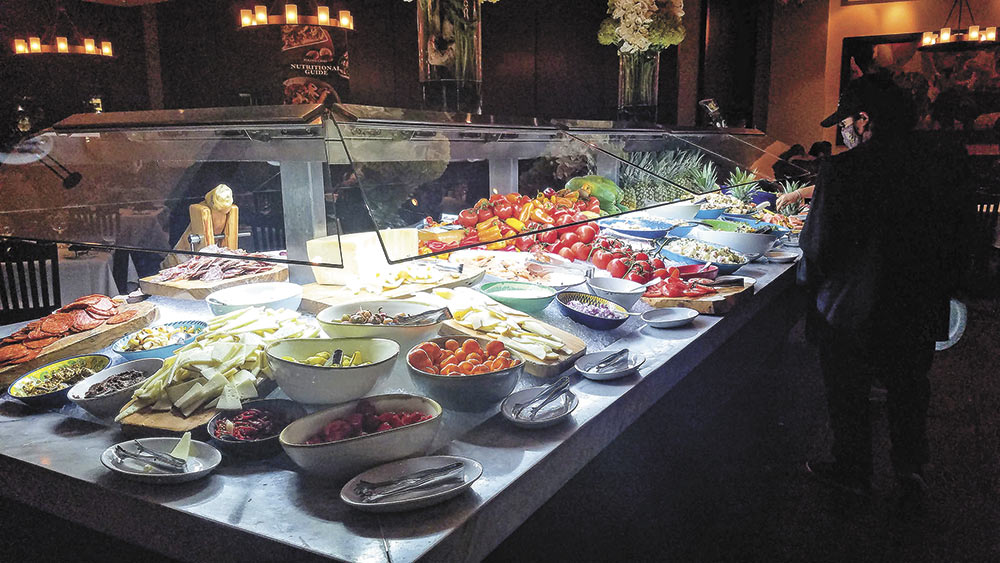 Hubby recently went on a three-night business trip to San Antonio to attend a conference. Daughter and I have always enjoyed San Antonio so we rearranged our schedules so that we could tag along with him.

Our first night there, Daughter enjoyed Chick-fil-A via DoorDash in the hotel room while Hubby and I joined his colleagues (Richard, Will and Kim) at Fogo de Chão, a Brazilian steakhouse. Although we’d heard good things, this was our first trip to Fogo and we thoroughly enjoyed it. We opted for what is considered a Fogo tradition, “The Churrasco Experience,” which includes continuous tableside service of signature cuts of fire-roasted meat, as well as unlimited trips to the extensive, upscale salad bar. Let me just say that it was a carnivore’s dream and days later, still seems a little decadent as I type this. There was filet mignon, bone-in ribeye, bottom sirloin, pork, prime part of top sirloin, bacon-wrapped chicken and steak, lamb chops, pork ribs, beef ribs and spicy pork sausage, with cheese bread, crispy polenta, mashed potatoes and caramelized bananas on the side.

What I earlier referred to as an extensive, upscale salad bar, the folks at Fogo call “the Market Table & Feijoada Bar.” It quite possibly may have been one of the most beautiful arrays of food I’ve ever seen. There were seasonal salads and soups, exotic vegetables, imported cheeses, smoked salmon, cured meats and more. Had I not been so enticed by all the meats, I could have easily made a meal of this alone.

The following day while Hubby was in class, Daughter and I enjoyed lunch at Hard Rock Cafe on the RiverWalk. She had never been to the rock ‘n’ roll-themed chain and was interested in checking it out. I failed to take pictures but we did have a good lunch. She ordered a jalapeno popper burger that was big and beautiful. I ordered bruschetta which consisted of balsamic-marinated Roma tomatoes and fresh basil topped with Romano cheese, served with toasted artisan bread drizzled with basil oil and a side of shaved Parmesan cheese.

The following day, Daughter and I went to Dave & Buster’s at the River Center for lunch, another place she’d never been. She enjoyed classic Buffalo wings and I selected the Korean sticky ribs which were five pork ribs with a spicy Korean barbecue sauce and toasted sesame seeds. I’d never eaten Korean sticky ribs before, but these were amazing, just absolutely delicious.

Our final night in San Antonio, Daughter again enjoyed Chick-fil-A via DoorDash in the hotel while Hubby and I joined his colleagues at Morton’s The Steakhouse for another amazing meal. We started with appetizers of jumbo shrimp cocktail, ahi tuna crisps and roma tomato, mozzarella and basil on crostini followed by a green salad topped with eggs, blue cheese and an anchovy. As Hubby’s not a fan of the anchovy, I got to have his. For our entree, we each enjoyed an eight-ounce filet mignon accompanied by sauteed garlic green beans and sour cream mashed potatoes. Dessert was cheesecake and key lime pie.

Usually, our trips to San Antonio conclude with a nice brunch at Mi Tierra in the Historic Market Square prior to heading home. However, as there was an hour wait to get seated at Mi Tierra, we opted to go next door to La Margarita Mexican Restaurant & Oyster Bar instead. Coincidentally, we all selected enchiladas albeit each a little different. Daughter had beef enchiladas, Hubby had chicken enchiladas verdes with a tangy tomatillo sauce and I chose chicken enchiladas covered with a mole sauce. Well sated and tummies full, we made our way to I-10 to head for the piney woods.