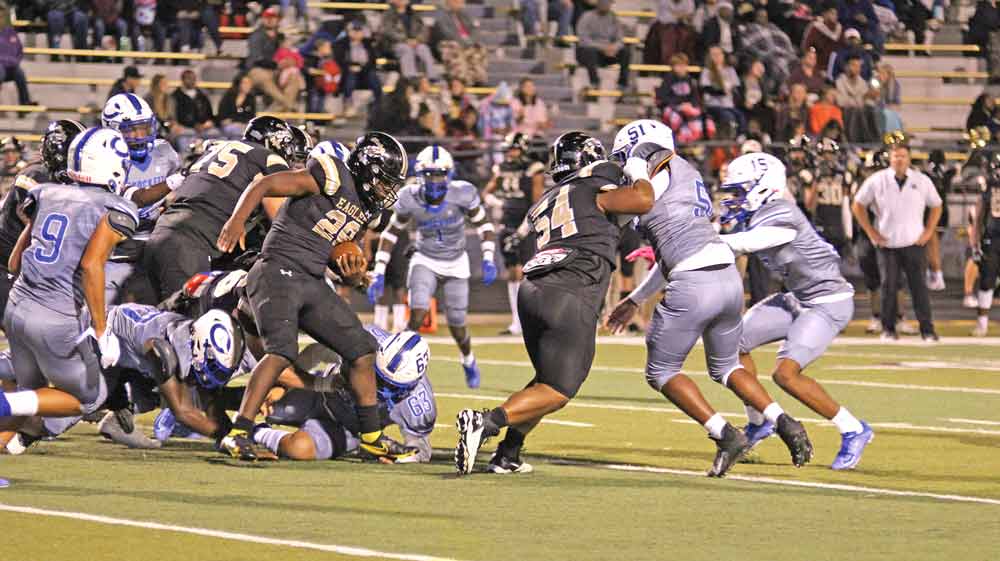 LUFKIN –  The Woodville Eagles turned in a dominating performance on both sides of the ball to upend the Crockett Bulldogs, 41-6, in the bi-district round of the Class 3A DI playoffs Thursday night in Abe Martin Stadium.

The playoff road gets much tougher for the Eagles with an area round matchup against No. 5 ranked Lorena looming Thursday night at 7 o’clock in Madisonville’s Mustang Stadium. Lorena (9-2) beat Hitchcock (5-6) 53-28 in the first round.

The Eagles (7-3) received the opening kickoff and set the tone early by driving 51 yards on 10 plays to take a 7-0 lead. Senior running back Pop Prejean scored on a 2-yard blast and kicker Cole Standley added the extra point with 9:02 left in the first quarter.

Crockett intercepted a pass on Woodville’s second possession but was unable to pick up a first down. After a punt pinned the Eagles back at their own 9-yard line, Woodville drove down the field on hard running by Prejean and a 15-yard pass to Jaylin Kibble. Quarterback Jack Fowler connected with Raylon Williams on a 44-yard TD strike and Standley tacked on the PAT for a 14-0 lead with 3:06 left in the opening quarter.

Prejean made two more trips to the end zone before half time to put the Eagles up 28-0.

After the Eagle defense forced Crockett’s fourth punt of the game, Prejean escaped outside and rambled 55 yards to cap a 76-yard drive. Standley’s kick made it 21-0 with 4:28 left in the half.

A 13-yard quarterback sack at the 3-yard line forced the Bulldogs to punt from their own end zone. Punter Tony Cruz managed to get off a good kick under heavy pressure and the Eagles took over at Crockett’s 38. Three plays later, Prejean bulled his way into the end zone from 1 yard out with :48 before halftime.

Crockett’s biggest offensive play of the half came on the last play when quarterback Jadyn Collins hooked up with Crowley Pierce on a 31-yard toss to the Eagle 25.

After halftime, Pierce energized the Bulldogs when he returned the kickoff to the Eagle 34. Crockett senior running back Keshun Easterling put Crockett on the scoreboard with a 27-yarder but the Eagles blocked the extra point and the score stood at 28-6 with 10:18 in the third.

Midway through the quarter Woodville took over on downs at the Crockett 39 and scored on a 9-yard pass to Jaylin Kibble. Standley kicked his fifth extra point to put the Eagles up 35-6 with 3:47 on the clock.

The two teams exchanged punts the rest of the night.

Late in the game, the Eagles returned a punt to midfield and completed a 25-yard pass to Lloyd Evans at the 14-yard line. Kameron Wyatt scored on the next play with :18 left to make it 41-6. After a delay penalty on a two-point conversion, the quarterback took a knee in the backfield.