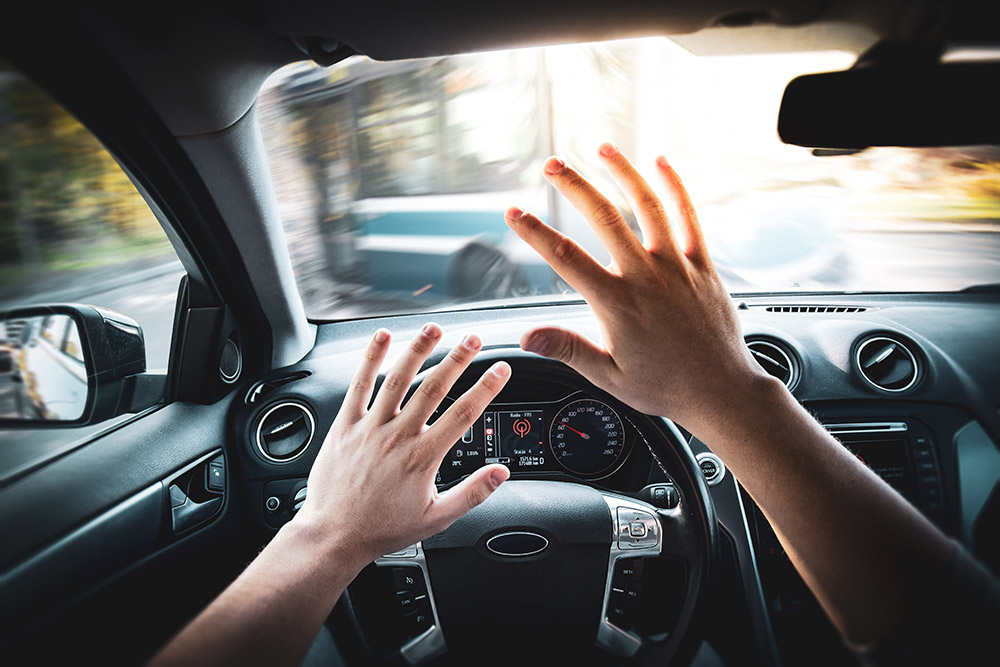 " I jerked my head up to see an oncoming vehicle that had crossed three lanes and was headed straight for the front of our car."

I was digging through my purse for my phone as my husband and I were headed into town for dinner a few weeks ago. I heard him yell and felt the car began to swerve.

I jerked my head up to see an oncoming vehicle that had crossed three lanes and was headed straight for the front of our car. My husband swerved sharply onto the shoulder and hit the curb where we came to a stop. The car barely missed us. The driver behind us swerved his vehicle to the center turn lane to avoid a crash. The driver behind him had no time to react and the out-of-control car hit him head-on.

The impact was deafening. Metal and dirt flew into the air as cars began stopping in all directions. I called 911 as we pulled into a nearby parking lot. I quickly went to the crumpled vehicles in hopes of helping someone. Other people were already trying to get the two driver’s doors open.

As I circled the SUV, I heard the driver who crossed the roadway begin to scream in pain.

He was crushed between the dash and the front seat and all I could see was the back of his head. As I looked in the back seat, I could see the headrest of a child safety seat in the floorboard covered with debris. We tried to get the wedged door open but could not. Welater discovered from family members who arrived on the scene that the driver had just dropped off a child that had been sitting in that seat.

The other driver who was hit was conscious, but in shock, eyes wide as saucers and never uttering a sound. I could hear the sirens in the distance. I felt as life flight helicopters left the scene with both drivers that the crash would result in at least one fatality. Their injuries were critical.

As we gave our witness statements to law enforcement, I learned the couple behind us who swerved into the turn lane has ties to TxDOT. The driver has recently retired from the Beaumont District. He knew safety protocol at the scene of a crash, and he and his wife worked to also help and gave witness statements to law enforcement. I put out alerts on our TxDOT social media pages so motorists would be aware of the lengthy delays as law enforcement began directing the long lines of traffic into the turning lane to get around the crash. It was more than two hours before the scene would be cleared.

I have been at the site of many crashes in my years as a news reporter, but it is very different when you are involved or witness one as it happens. It disturbed me so that I couldn’t get to sleep that night, knowing the heartache those two families must have felt and how easily my family could have been feeling that heartache. I said a thankful prayer that we were safe, and that my husband had been so alert behind the wheel.

TxDOT has determined that most traffic fatalities occur because of speeding, driving distracted, or driving under the influence. You never know what is going on inside the vehicles around you. Never take for granted that the driver you are looking at in the vehicle coming toward you is as alert as you are.

Most of us look away from the roadway for a second when we drive. Whether it’s to glance at something along the roadside, take in the scenery, or look down in the car for one reason or another. But in that second that we look away, any of us could be involved in a serious crash. One that could take a life.

I have looked back on this experience over the past three weeks and what sticks out most in my mind is how fast it happened. All within just a couple of seconds. There was no time to think about putting a phone down, buckle a seatbelt, or tell that person next to you that you love them.

I pass this crash site daily. The black marks are still on the roadway, and tiny bits of glass are along the shoulder and in the nearby grass, reflecting against the sun. A disaster can strike in the blink of an eye, and it can change a life. Please remember to keep your hands on the wheel, your seatbelt buckled, and the phone put away. Because life passes us by in a split second and this close call was just a little too close.