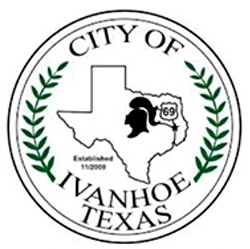 IVANHOE – In the most recent regular meeting of the Ivanhoe City Council, Ivanhoe Mayor Cathy Bennett began the regular agenda with a report on the city’s certified estimates of taxable value for the current year’s levy.

The estimates, from county appraiser David Luther, represent the same value as the previous year, Bennett said. There have been no re-evaluations of properties done, and the estimated values for properties across the city amount to $84,995,604.

Bennett said the interesting note of this year’s estimates came from Luther’s comments on the estimates. Luther, who has been doing appraisals for 40 years, stated that he had “never squirmed and worried so much” about providing estimates.

Luther, who was unable to attend the meeting, cited in a provided statement uncertainty with the real estate market, soaring land prices and “unbelievable” housing market activity as reasons for his nervousness with appraisals.

The next presentation on the agenda for the Thursday, May 19 meeting, was a report from the city’s delinquent tax attorney James Guest, of Linebarger, Goggan, Blair and Sampson, LLP.

The report covered the city’s delinquent tax actions from the period of Sept. 1, 2020 through August 1, 2021. Guest said the firm mails out letters on every delinquent account for Ivanhoe property owners, five times a year. Last year the firm sent out a little more than 4,000 letters, Guest said.

The fees for the process, Guest said, are at zero cost to the city, but paid for by delinquent taxpayers.

Guest said a lot of help is available for delinquent taxpayers, and said that the Texas Department of Housing and Community Affairs has partnered with Linebarger, Goggan, Blair and Sampson to provide information about federal grant assistance for taxpayers.

Guest said the firm has sent out letters containing the information and offered help to guide anyone through the process who might need the help.

Guest said it has been difficult to have hearings on some properties subject to tax litigation. “The district judge will not sign tax warrants. I have approached him several times,” Guest said.

He mentioned a “hot topic” property on Lakeview, which the firm is trying to obtain a judgment on to take to a tax sale.

Guest said Bennett stays on top of the firm’s actions; working overtime to make sure the movements are conducted with regard to the properties in question.

Overall, Guest said there has been an uptick in collections over the period his reportage covered.

Haney has been serving with Rader in the city’s court system, and gave her notice to be effective May 31. Bennett said the city was talking with Pct. 1 Justice of the Peace Trisher Ford about working with the city court, and will look toward an agreement for Ford to work with Rader.

Haney said that if the city had any need for her to continue to serve, she would, until a replacement can be found.