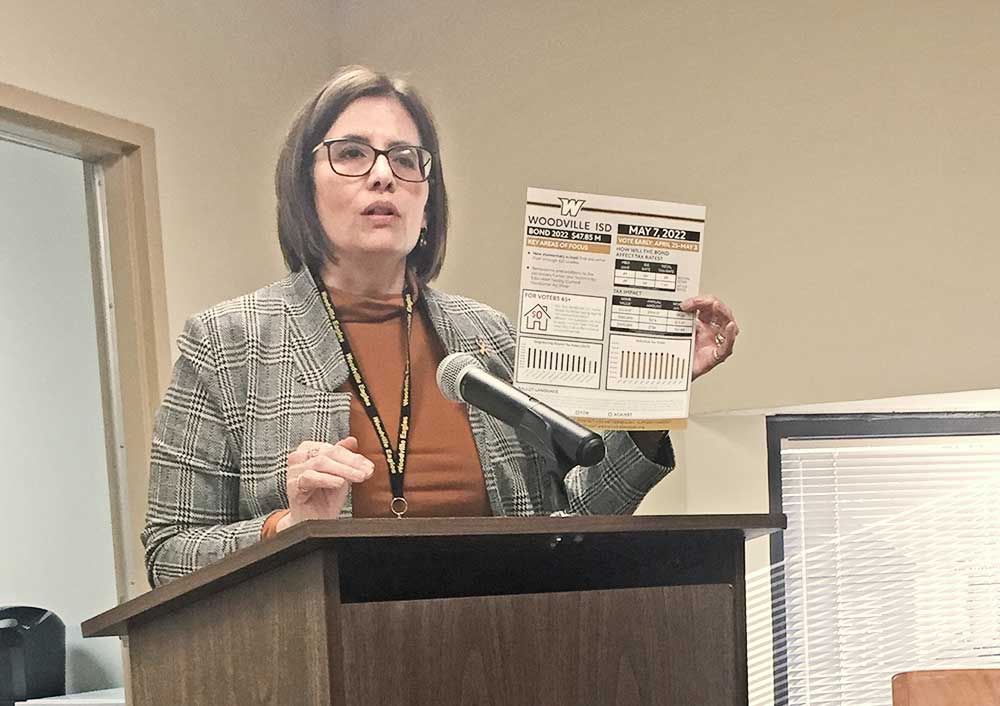 Meysembourg spoke to the council during its regular monthly meeting on Monday evening during the portion of the meeting allotted for public comment.

WISD is bringing a bond election to the voters on May 7. The district is looking for a $47.85 million bond to build a new building for Pre-K through fifth grade students, as well as renovations and additions to the WISD vocational-ag shop.

Meysembourg has presented a series of town-hall meetings for WISD taxpayers, with one scheduled for March 28 at the elementary school campus. She presented an informational flyer to Mayor Paula Jones, the councilmembers and those in attendance, which specified how the bond will affect tax rates.

At present, the M&O (maintenance and operation) rate for the levy on WISD taxpayers stands at $0.89 per $100 of assessed values and would remain the same after the bond. There is no I&S (interest and sinking) rate, but the bond would bring that to $0.46, which would bring the total tax rate to $1.35 per $100 of values, which is an estimate based on market conditions.

Meysembourg explained in her presentation that if voters approve the bond, the tax rates for WISD taxpayers would still be among the lowest in the region.

Among its slate of regular agenda items, the council approved a resolution for the city to approve the Woodville Housing Authority’s wavier of payments in lieu of property taxes.

WHA, as city administrator Mandy Risinger explained, is HUD-funded, and exempt from paying city taxes, however, each year, the entity makes a payment to the city “as a show of good faith to support the community,” Risinger said.

The payments vary depending on the occupancy of the housing complex.

Council approved a contract between the city and David J. Waxman, Inc., for the firm to act as a grant administrator for the procurement of a CDBG grant to repave Temple Street.

Lesley Waxman, of the Waxman firm, spoke to the council, and thanked them for approving their services. Aside from approving Waxman’s services as a grant administrator, two other agenda items dealt with the CDBG grant. Waxman spoke about a resolution by the city to adopt civil rights plans and policies pertaining to the CDBG grant program.

Councilmember Herbert Branch inquired about the language of the civil rights plans and policies and said that in his experience of the city utilizing grant writers, he’d never seen such a policy. Risinger explained that it was a policy stating that the city would operate fairly in its practices with regard to the grant procurement, which is already a factor in all of its transactions, but the name had changed.

That resolution, along with a third, to designate signatories for contractual documents and fund requests concerning the grant, were approved.