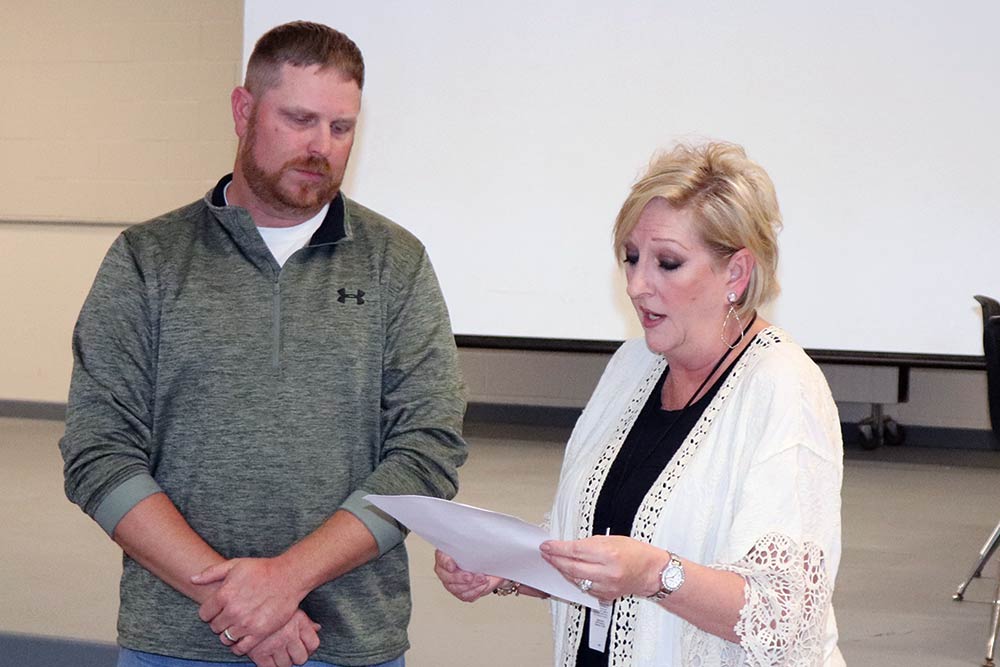 WOODVILLE – A new facility and a bond election was the recommendation that the Woodville ISD District Facilities Task Force arrived at after an ongoing study of the district’s campuses.

Trey Allison, on behalf of the Task Force, gave a presentation to the WISD Board of Trustees at the board’s regular monthly meeting, held on Monday, Nov. 15.

Along with Allison, several members of the Task Force were present at the meeting. These individuals are comprised of community members from various walks of life, including business owners, parents, WISD staff and others. The committee has met for almost a year and has examined various options with the district’s facilities.

Allison said they have looked at every possible option on facilities, from renovations to starting over, and ultimately, the facilities used for the Pre-K through fifth grade students “exhibit many challenges,” he said.

With regard to safety and cost efficiency, a one-roof building to facilitate those students would be the best option, in the findings of the committee, Allison said.

Secondarily, Allison said, the committee found that a new facility is needed for vocational-agricultural classes.

The current facilities for those classes, Allison said, are just not adequate. Further, the committee recommended that in May of next year, a bond be called for the amount of $47,850,000.

With that projected figure, Allison said a projected tax increase of around $0.45 per $100 of assessed taxes could be expected, if passed.

“Although that sounds big…we’re on the very bottom [of tax rates],” Allison said.

“Strategically, this sets us for the future,” he added, at the end of the presentation.

Board members sworn-in; board reorganized

Before getting down to the business of the agenda, WISD Board President Jimmy Tucker presented outgoing board member Greg Stewart with a framed resolution honoring his service.

Stewart opted to not run for re-election, and Kris Stewart won his seat. Stewart said he was honored to have served on the board.

Returning board members Bryan Shirley and Richard “Kooter” Shaw were sworn in along with Stewart to begin serving the new term.

After they were administered the oath of their office, Tucker said it was time to reorganize the board. Shaw motioned to nominate Tucker as president; John Wilson as vice president and Josh McClure as secretary. The nominations were unanimously approved.

The WISD Board of Trustees during its Monday night meeting also discussed and/or voted on the following items:

• The approval of unassigned fund balances were committed toward capital improvements, contingencies and debt service.

• A bid was awarded to Skywriter Communications for the WISD technology infrastructure project.